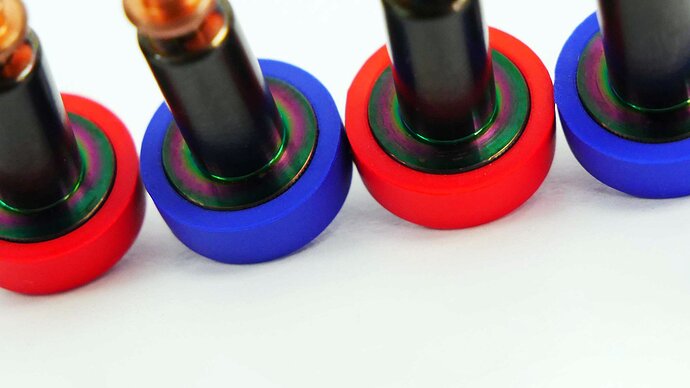 Popular OEM’s anticipated next-generation of nozzle, almost a year on from its reveal, is nearing launch. The ObXidian is coming in October, according to a recent blog post.

It looks like Rivo is being pushed a lot by E3D but personally, I am having some issues with the cost of the nozzles. I get it, when you replace the nozzle you are replacing the orface and the throat, Heater and thermistor get replaced as a unit as well. It’s easy but I am still in the camp of changing out $3 nozzles instead of $30 ones.

What are your feelings on it, do you think it’s going to become the new norm, I mean this style of nozzle/hot end? more of a component-based system rather than a part based?

I personally like the concept. I just replaced a nozzle from a traditional hot end and that requires removing the top layer fan shroud so that I can get vicegrips in there to hold the heater block while I put the socket to the nozzle. Being able to remove it with fingers sounds nice right now - but I’m not sure what it means with the top layer fan shroud (in a perfect world, it wouldn’t have to be removed to replace the nozzle). I would expect that you will have to recalibrate the Z axis after replacing the nozzles (the same as in any other situation) so the actual nozzle replacement workload reduction is probably a lot less than they’re advertising.

I would be more interested in them when the “Tough New Non-Stick ObXidian Nozzle” comes out (hopefully it won’t be too expensive).

I’m not sure you’re representing the “nozzle” correctly. From what I can see, it as a nozzle, heater block (but not heater and thermistor) and heat block all in one. Maybe a bit of overkill replacing the heater block and heat block every time you replace a nozzle, but then you don’t have to deal with them failing. As I said, I like the concept, I’m not sure how much better it is than having the traditional hot end parts.

As for $3 nozzles - that’s something I don’t think I’d recommend to people as they tend to be of dubious quality and are often more trouble than they’re worth. I’m using $25 Micro-Swiss nozzles on my printers and I’m fairly happy with their performance (as I’ve posted, they don’t last as long as I think they should as I said I just replaced them as they both started failing at the same time) - however, Micro-Swiss has responded to me when I complained about their usable life which is a big plus in my book.

I feel that the Revo nozzles are very analogous to toner cartridges for modern desktop laser printers. When you swap out the toner, you’re not just replacing the actual toner cartridge - you’re also replacing the imaging drum and a bunch of other parts (that I’ve forgotten the names of because it’s actually been almost 20 years since I was in that industry), many of which are a serious pain in the butt to replace individually.

Anyway, my point is that with laser printers, the high-end machines where they assume that a trained tech is doing the service work, and the very low-cost machines where they assume the printer isn’t going to outlast one maintenance cycle anyway, those parts can all be individually replaced but on a machine that’s mean to be long-lasting but user-serviced, most of the parts that wear out are replaced every time you change toner. When this first came out, it was derrided as being super expensive but as secretaries and office assistants realised how quick and easy it was to keep the printer up and running, it became very very popular. So then other companies started doing it too, and the cost came down to something more broadly tolerable and so it became more popular stll.

It’s not a perfect analogy, but it feels like things like the Revo are absolutely necessary if home/hobby 3d printing is going to become a widespread, reliable tool and not just a hobby for masochists who like tinkering with machines. I know that for myself, I wanted a Prusa XL and bought a Bambu X1 in large part because of their single-component hot ends. Fucking around with trying to get the nozzle and throat properly butted on my Ender-5 is such a horrible experience that I’ve been living with what I’m pretty sure is a damaged nozzle tip for three months on that machine, because it’s easer to use a bit of glue on the finished part to fix gaps where the perimeters didn’t merge than to try and replace the nozzle.

I want to get a Revo on that Ender, but until recently hadn’t found a mounting solution that would work with the MicroSwiss direct drive that’s currently on my machine. I’ve discovered one posted over on Printables, but right now money is super tight - and with the X1 at hand, I’m not sure I’m going to keep the Ender-5 anyway. At this point I’m only using it to print Silk PLA, because to get a good print in Silk you have to slow all the way down to about 30mm/s and doing that on the X1 would be like using your Ferrari as a snowplow.

Anyway, the point of this long post is that I do expect that simple, reliable, unskilled-user-replaceable parts will become more common, and even at the higher cost I think that’s a good thing. If I’m replacing a nozzle every six months, a Revo would cost me 60$ in parts and 5 cents in labour and frustration; your 3$ nozzle will cost me 6$ in parts, 30$ in labour (billed at Alberta’s minimum wage and assume everything went right the first time) and about 100$ worth of frustration (obviously a very personal cost). So for me, the extra dollar cost is more than worth it with all the frustration saved.

I wear out nozzles quickly. I have found almost all the stringing I experience is with a no longer all the way round nozzles. I tend to swap them out at the first sign of degradation. The thought of 30$ over 10$ (I also use genuine E3D I find they print better and give me smoother prints than clones my experience anyway) its a bit of a concern. I purchased a Nozzle X hardened steel and have been using it for ages. The time saved by all accounts for the REVO sounds worth it to me. I am very busy and actually value my time and account it. To me the printer is a tool, I use it as such. Time spend with the printer and not actually printing is a loss. If it takes a change from 20-30 mins to a min or two that is worth the difference.

The only thing stopping me from a whole hearted switch is how many lost prints will I have because the nozzle wore and I didn’t notice.

I will likely switch when there is a hard nozzle that basically does not wear. Like the X. I guess that is the ObXidian but I really will need to see how long wearing it is. Assuming it is similar to the X I would expect it to be 100-135$ each. If it lasts a year + I will buy and adopt it because in the end I think that will save time and money.

Don’t get me wrong, I do think it’s a good idea to have the 1 part replaced. I think that’s a good idea. and building just one more step on what @VagabondElf had said. To make it mainstream or more widespread it does have to be easier for the non-tech person.

That’s actually a point I never really thought of in that way. I know there was a discussion earlier about where 3D printers are going… this is kind of related to that.

A lot of what the first-time buyers ask me when they are about to ask is how much maintenance is involved. I do try to be as honest as possible but this would change the conversation. Being able to change nozzles while cold and as often as you like does sound really appealing.

On my production printers (because the print quality is not important it’s more volume for me) I have no issues with using “cheap nozzles”. It’s just a part of the operation for me, If it starts to look even a little bad I just change it out and move on. Sometimes I may get 10 rolls sometimes I may get 30. My products are B2B usage and surface quality is not important where as Functionally is.

In my printers at home, surface finish is much more important that is where I would try the Revo. Now I noticed they actually have the creality mounts as well.

Hey, @kitedemon if the mount is standard creality wouldn’t that mount on the micro swiss DD unit?

I still want to see an actual implementation of the Revo nozzles - I would like to understand how the user is able to replace the nozzle with their fingers when there is a first layer cooling shroud there. I would think a better solution is to have a few holes for a simple tool that allows it to be removed from the bottom.

When I look at the Revo mount, it’s for the V6/Prusa i3 mount: 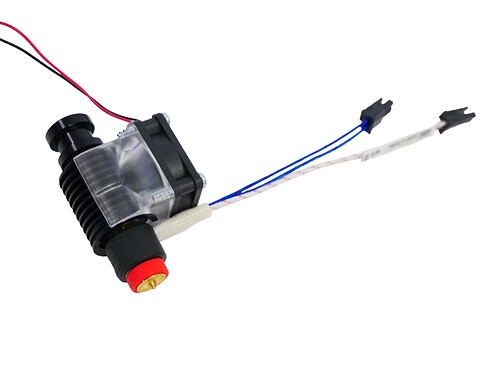 not for the two hole (Ender 3/CR10) mount that the uSwiss uses: 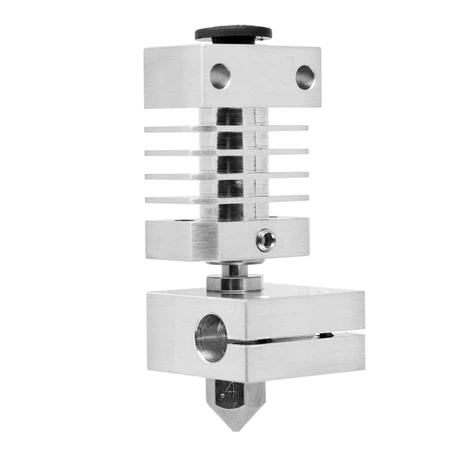 The one you are looking for is the Revo CR (assuming CR is short for creality. It has the 2 hole mounts like the micro swiss 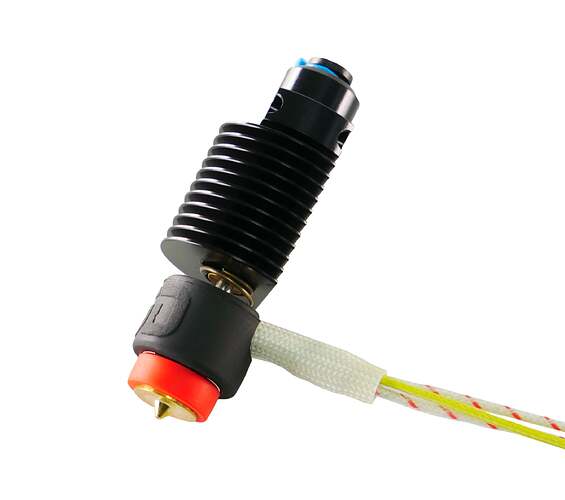 Creality mounting holes. Convenient M3 clearance holes correspond to Creality’s X carriage mounting pattern, so you can get up and running quickly without extra mounts or adaptors. Just reuse the existing M3 bolts! Easy nozzle swaps. A variety of... 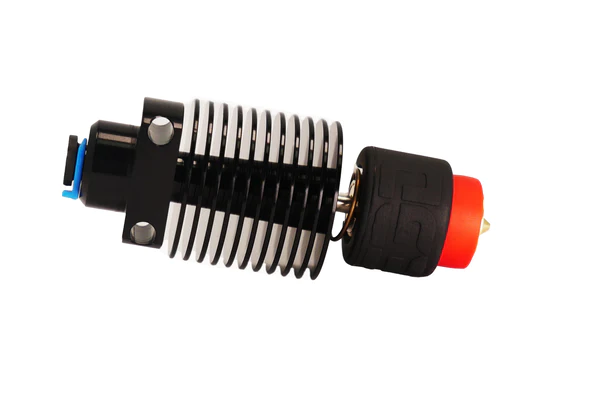 All is good, I caught it the other day when I was digging for this post. I kinda laughed that creality is considered its own hot end now

Oh, that’s new - well, new since I last looked. Last I saw they had a version that could be adapted onto the Ender series but didn’t put the input in exactly the same place; no big on the default bowden setup but a problem for the direct drives.

I would think that, so long as the vertical clearance is the same, that should swap onto the MicroSwiss plate just fine. Now the big question is: do I want to invest another 110 Sterling into my less favourite printer? Hmm. Decisions, decisions.

I have that quandry every day my friend…

Am I missing something here? When I look at hot ends on AliExpress and Amazon, that’s how they’re described. 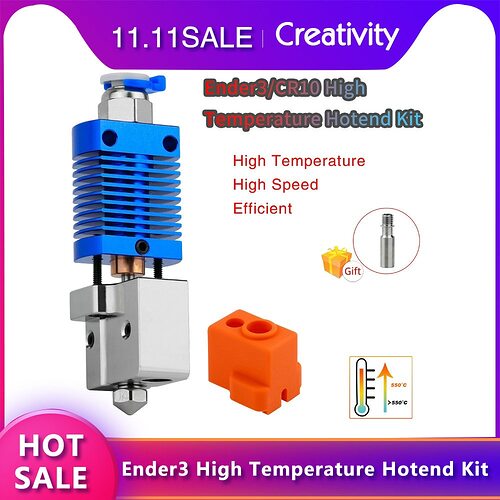 Hey, @kitedemon if the mount is standard creality wouldn’t that mount on the micro swiss DD unit?

Possibly I don’t own a micro swiss so at best it would be a guess.

I love the marketing speak. Wear resistant copper nozzle… copper and wear resistant? compaired to what I wonder, lead?

My comment was that other manufacturers refer to their hotends as for Creality even though they are more or less standard and used on other printers.

I think you will find 'other ’ printers are owned by the same company who owns Creality. I just find the marketing stupidity funny, wear resistant copper. It either isn’t copper or it isn’t wear resistant but as these are 'weasel" terms they don’t really mean anything any more.