Musings of a Noob chapter 1 : not all filaments are created equal

So far I am still taming my printer. I can say I am happy with my printer.

So far I have tried 6 types of filament.
1 roll came with my filadryer (PLA white)
4 from amazon : (PLA) 2 whites, 1 grey and 1 clear
1 PETG that came with the printer.

Although I might be confusing what I got from the printer company and from the filament dryer company.

PETG
I talked elsewhere on the boards about my «meh» experience with PETG. Base temp suggestion were too low imho. So my first print was a fail and my second almost 100% The print was in three parts and was for a Ollivander wandmaker wall mount, for a wand (of course), which I made for my tech savvy friend who did an exam of my printer before launch to make sure nothing went poof when I pressed the start button. I got the files from Thingiverse

Now to be fair I think the problem I had with the support hooks of that build might be the STL file. Someone said on these boards to beware of some of the files there. They don’t always work. So to find out if it’s my PETG settings or the design of the part, I am thinking of printing the same hooks with PLA and see what happens.

PLA
White and clear.
Several prints were made. No fails except one which was due to my noobness and I cancelled the print very early on, corrected my setup and restarted. Very few filament wasted.

Both colors worked great for prints ranging from .2mm down to .12mm. With or without supports, tree supports, skirt, raft or brim.
Then came the grey. I am printing a teleport gate for a FRPG. Is comes in three parts. A top and bottom part with pegs for assembly. The reason for this is that the esoteric energy filaments thingee slides in between the top and bottom during assembly. The magical effect is printed clear to be painted with Tesseract Glow paint.
After printing the first part I noticed some layer lines which had not fused and threatened to separate. (Good ol’ Cyamo, Cyama, Cyanoa, … Krazy glue soon fixed that).
Wasn’t too sure as to what caused that. But when I started printing the second part, it started to see the same result on the plate. So I figured the problem could be the filament. I had no problem with the other colours and had not fiddled with the settings. I applied the old adage of If-it-works-don’t- fix-it-stupid. But when I saw what was happening I figured, heck, it just started printing so why not tweak?
I don’t know about other printers but mine allows to change things while printing. So I tried changing the nozzle temp from 200 to 210deg to see what would happen and the change was immediate.

Here is the completed portal. I will let you guess which part was printed first: top or bottom.

All I have to decide now is either reprint the ugly part or use XTC-3D coating to fix it.

Addendum : well, my wife broke the part while examining it, so I guess that settles it. I’m getting a divorce! …Not!

She bought me the printer for my birthday. So I keep the wife and reprint the faulty part.

@gondolin hey, that looks like serious under extrusion. If it comes back check for a part clog. Low temp petg might have left junk inside the hot end causing the under extrusion.

Always there to the rescue. Thanks fellow 3DPR enthusiasts.

Will look up underextrusion and see what it is all about. But chronologicallly speaking I went : PLA white, PETG white, PLA clear and PLA grey. My problems occured with my first grey print. I changed the nozle temp and have reprinted the top and 5 other small pieces and everything seems in order now…

Now I am making my first 1-day print and will keep a close eye on the project. And while I am doing that, will also head over to the teaching tech site and look that up. Figure I might find something about underextrusion threre also…

Again, thanks for the input folks.

Here is the gate with the new printed part with a nozzle temp of 210deg. The quality is at .2mm as I figured this was good enough before priming and painting. (plus I am impatient)
Apologies for the quality of the pictures. I am as experienced in this as I am making 3D prints.

Also : some of you may have noticed that the top part of the statues does not align with the bottom part. that is not a printer or STL file error. Stupid me just had the top part facing the wrong way. Oh well! Good thing the gate is not glued yet… 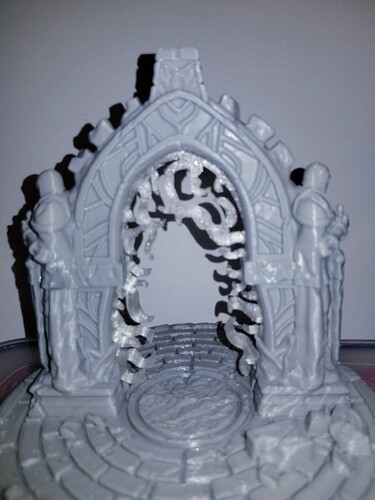 Here are some mini bases (theme stone and dirt) these printed as a set of five bases printed at 220deg, still at .2mm. Surprised at the perfect circle produced. 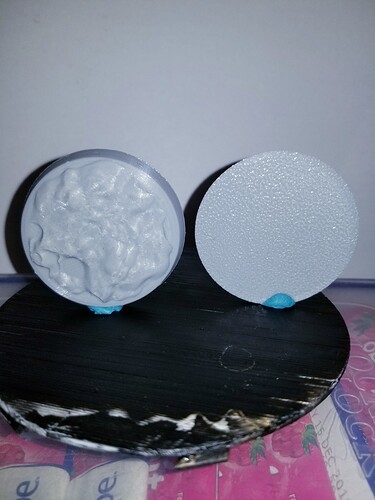 I don’t see any under extrusion in this one. If you haven’t done calibration you should. It does help. under extrusion is not enough plastic is coming out and there are gaps in the layers and it also leads to weak prints. You can get similar with low temps. Room temps have some effect too. Hence enclosures.