You have a thermistor that’s gone bad or has become disconnected.

I don’t know if its in the heated bed or the hot end - most likely it’s in the hot end and should be easy to replace. Lots of sources online explaining how to replace the thermistors on the Ender 5 like: 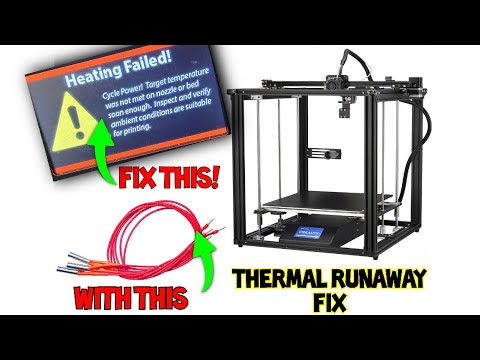 Thanks for the reply. I guess i need to call the shop to see what the warranty is.

I can let you know, I am one of the techs.

The warranty covers major mechanical and electrical. Thermistors, Heater cartridges, PEI sheets and nozzles are considered consumables and would not be covered.

Honestly, it’s under $10 for the part, most of the time it’s disconnected, Unplug and plug back in near the rear right corner and try again.

Thank you for the information but is it normal to have to replace parts after 1 month?

It’s not abnormal - especially in the case of parts that move and have wires attached to them. They can get caught in something and damaged or suffer mechanical fatigue.

Thermistors have very, very, very small wires in them and are easily damaged. As an Ender 5 Pro owner - almost the same as your Ender 5 Plus - I learnt to keep three or four spares on hand, just in case.

The good news is that they’re also about the easiest thing to replace on the printer. (Well, the hotend one, anyway - and I never needed to replace my heat bed thermistor after about a year of operation.)

And the very good news is now you can be certain your printer won’t burn your house down by continuing to pump energy into the hot end when it can’t tell what temp the hot end is at.

Thanks. I’m a 3D newb, i dont have an issue buying small parts I’m just worried about doing more damage if incorrectly replacing/installing the pieces. Also paying the shop $60-$100/month to service my new printer is discouraging.

Hi Ron, It’s all good, as @mykepredko had said, it’s not abnormal. they are very fragile.

Trust me, it will become normal to change out little things like that but no it will not become a weekly or monthly occurrence.

It’s like replacing the wipers on your car. The first time you do it you’re all “I don’t know how this works” but then you figure it out, and it’s way cheaper to do it yourself than to pay a mechanic every time.

And, to continue the analogy, you shouldn’t need to do it very often but if you get a week of ice storms you might flay the wipers to pieces pretty fast. For the thermistor, it’s good to have spares because it’s a vital part, they’re pretty inexpensive, you may damage one trying to install it so you never want to have just one spare, and if there’s something else wrong (like your wiring harness is getting snagged on the X motor and being yanked on (ask me how I know) ) you might end up replacing a couple before you figure out the root cause.

Finally, to be blunt, Creality machines take active maintenance to keep running. You’ll get more confident as you go, but you’ll at some point need to replace the cables to the X motor at the very least. So it’s time to take a deep breath and dive under the hood!

Ron you might want to check at the motherboard end as well My little Ender 2 Pro started doing this the other day and I found the plug to the mainboard was not seated well! They hot glue all the connectors from the factory so it was glued in crooked! I pulled the glue out of that area and reseated the plug and it is all good!

@Ron I am sorry you are experiencing this. It is frustration personified. 3D printers are racing to the bottom. The cheap printers are plagued with poor QC the cheapest possible components and cloned designs. This has IMO lead to two schools people that enjoy fiddling with the printers, where the hobby is the printer not printing. The other side is the people who the printer is a tool and the prints are the valuable part.

The industry need the tinkerers they are constantly developing and coming up with new ideas and better designs.

I personally want to make prints. If there were a printer that never needed anything I would be super happy with it. This is a pipe dream.

There are more reliable and stable platforms out there. They are not however in the same price point as the bottom. Sadly these are likely the best printers to start with rather than units that need endless mods and servicing to work properly.

Thanks for all the replies folks.

So to recap since i bought the Ender 5 Plus and paid $150 to have it set up in December '22. I have had a overheating error, the out of fillament sensor didnt work, the steppper stopped working and the filament is getting ground up and shavings are all over my work area. I dont think this is acceptable.

We all feel your pain and have been where you are. You’ve been unlucky but not unusually so.

There really isn’t a good low-cost first FDM 3D printer out there and, to be honest, there aren’t any good middle-range printers out there. I built a Voron 2.4 this past year and, other than being introduced to Klipper, it was a major disappointment in terms of the amount of work and the additional money I had to put into it - the initial investment was $1,100 and I’ve spent another grand on it to get things running what I consider properly (I must admit that final print quality is quite decent but the maintenance required for the printer is more and more difficult than I have bargained for); I’d give the experience 2/5. I’m just putting this in because I’ve had multiple 3D printers over the past 12 years and while I’ve seen some improvements in technology (software and controllers mainly), I continue to be disappointed in what’s out there for sale.

This is really a hobbyist driven product space with very little solid engineering being done in it. A big part of the problem is that consumers are driven by cost first which leads to printer designers making design trade offs and feature selection that result in products with fair capabilities and poor reliability (which you’re experiencing).

The best thing I can offer you is that, from everything I’ve read, the Ender 5 is a pretty good base from which you can start from. You’ll have to put some money into it, learn which features work and don’t work (I’ve never seen a filament sensor that is worth anything; along with them being of generally pretty shoddy quality and not well designed to detect filament breaks, controller software generally can’t deal with them effectively - I’d recommend throwing it away and not thinking about it) and probably implement some fixes on your own.

With a bit research, asking questions, work and some money, you will have a printer that is reasonably reliable and will provide decent prints and give you some enjoyment along with a sense of satisfaction.

Sorry I can’t give you a better message than that.

I have an artillery x1 in bits all over the place. I have replaced almost everything but for some of the super structure. It is blown the fourth board in a year? Or two I don’t remember I have the part I cannot be bothered messing with it. I have easily double what I paid for it in parts and at best it makes so so prints. Garbage.

I have the exact opposite experience with my Prusa. It is 100% reliable I have made one change that actually didn’t improve anything and eventually I will return it to 100% stock.

They have actual tech support (24/7 and reply in hours or less where as Artillery is weeks or months) The parts are all name brand.

I am 100% with you, unacceptable to buy a printer that basically doesn’t work until you redesign and re build the whole thing. Of the printers I have used (4 I own and 7 more at work) the Prusa is the lowest total cost and the one that I send a print walk away and almost all the time return to a completed print that looks good.

The poor QC and the low quality parts and assembly are the most damaging thing that is preventing printers from being super common. I personally will not buy a printer that has cloned parts again.