So, when do you you all think 5 axis 3d printers are going to become (relatively) affordable and common? I realize there is the open source prusa 5axis mod that was unveiled last year, and probably a high end printer or two, but when, if ever will we see something that many average consumers could afford, ie, in the same price bracket as the Bambu Labs X1. My dream of a 5 axis printer would not be like the prusa mod design, but with the head performing all 5 of the axis, instead of having the bed having 2 rotational axis added. That would allow for more build volume, and probably slightly less complex gcode. It would be a dream for overhangs and would also be great for being able to make a print strong in all 3 axis, instead of just 2 like the current FDM status quo. What do you think?

There where some experimental multi axis printers shown at one of the trade/hobby shows this years based on readily available modified printers. Yes they can reduce supports and do overhangs nicely BUT. The main limitation is that the tilling table interferes with the print head so it has to be very small and therefore a limited size.

Maybe some commercial printer have found away to solve this. Every step forward is just two new problems to solve.

Yes, the tilting bed design limits print size, but surely a printer where the head did all 5 axis would be able to do overhangs just about as well, and not have the size restraints that the bed tilting design has still would need a compact print head though.

I’m not sure what you want from a 5 Axis printer - is it to get larger volume prints or better overhangs or to make your prints more isotropic?

Those are some of the promises of 5 axes FDM printing but I don’t think there really is a printer design out there that provides those characteristics. 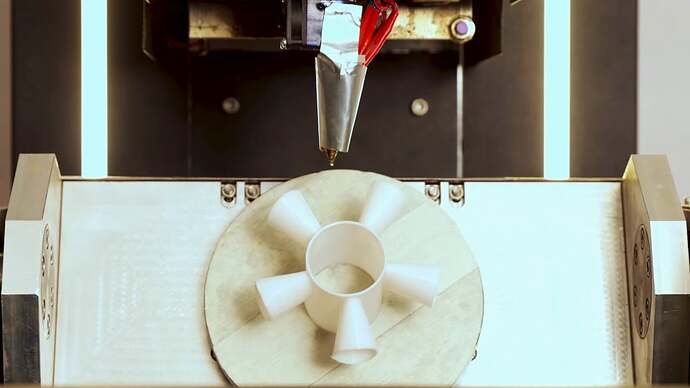 What Is 5D Printing? – Simply Explained

When you've got a curvy, complex model, 5D printing is the way to go. Read on to learn everything you need to know about printing in 5 axes!

Personally, I see the big issue being the slicer technology not being there. You’re asking for a sub-$1k printer that needs several million of dollars in investment in slicer technology and I don’t see the business case coming together to make the software investment reasonable. Yes, there are dedicated volunteers out there, but you’ll have to wait a decade or more if you’re going to rely on them to create effective tools for a low cost platform.

The best solution right now seems to be a two nozzle printer with one nozzle extruding water-soluble support material. You won’t get all the advantages of a 5 Axes printer, but you’ll get most of them and the cost will be reasonable.

My reasons would be primarily for the no support overhangs, with 5d, there should be pretty much no quality cut like support material will have, even with soluble supports. I wasn’t thinking any bigger volume than what is common with FDM printers today, just bigger than what a bed tilting 5d setup would practically allow, which, from what I see, isn’t very big. I get what you are saying about software development costs and such, but don’t forget, that was likely said years ago about the 3 axis FDM printing which is so readily accessible today. Many, if not most technologies are like that, the big boys, ie, corporations, pay high prices for the first while, and as the economies of scale and such kick in, gradually the technology becomes cheaper, until eventually people like you and me can afford it. I am not saying I think it will be so very soon that 5d FDM printing will be in the consumer price range, but I think it is certainly possible eventually, as long as long as FDM printing isn’t completely obsoleted by some better technology before that happens. OK, I guess that is quite the spiel,

but I guess the reason I started this topic was to see what everyone else’s thoughts were on 5d printing, and the time line before it will be accessible to the average Joe.

Nobody ever said anything about having to wait for free/community supported 3D printer slicer software to become available. The first slicers were created to make something from the first 3D printers and things grew from there as people saw what a 3D printer can do - basically everything I print is mechanical parts for various things and I’ve never said to myself, “Damn, if I only had a more than 3 axes to print with”. I don’t seem to be alone, I just did a search and while there seems to be two companies that provide 5 axis slicer software, I can’t find anybody putting in requests like “Does anybody know of any good 5 axis additive manufacturing solutions?”

You’re looking for somebody to create a low cost device that is a lot more complex both mechanically than existing printers without an established software base for something that really is of marginal value to, at best, 1% of 3D printer users.

Well, no, probably not below $1,000, the X1 isn’t either, and by the time a 5d printer is accessible in the same price bracket as the X1 is now(namely the mid to higher end consumer grade printers), inflation will have moved the dollar figure where that cost bracket starts to probably well past $2,000, quite possibly $3,000 or more. You say of only marginal value to a tiny fraction of printer users. Well, I disagree with that. If people had access to a printer that could do better overhangs, had the potential to have better print quality on topside curves, and also had the potential to print stronger parts, you don’t think there would be a sizable amount of interest? I do. Maybe you aren’t interested, but I think many people would find such a technology leap much less marginal than you indicate. As far as marginally useful technology goes, I would sooner point to the obsession with print speed that seems to be all the rage. Not saying I wouldn’t like a speedy printer like the X1, but at this point printers are having to be heavily optimized with proprietary parts to achieve those speeds. I personally, would rather have a few lower cost printers that can get about as much done, for more or less the same up front cost, and have off the shelf parts available practically everywhere, instead of being practically married to the manufacturer of my printer. I am quite sure it wouldn’t break any laws of physics to develop a 5d printer where all the axis are done with the print head, using parts that are largely off the shelf today. Clearly you and I disagree on this subject, that’s fine, we can agree to disagree I think.

To get what you are looking for I think (rarely) the hotend would need a complete redesign from what we have to day. Using the X Y Z, current axis’s and tilting in the X Y axis and the table rotating still leaves you with the interference problems which is the limiting factor that the experimental printers I mentioned above have run into. Very small print area. The hot end would need to be longer and thinner and probably need to tilt in all directions to get into the tight spaces that would be created.

Yes, you are right, the hotend would likely need to be redesigned. But the kinematics should work for a 5 axis hotend. I realize it’s not gonna be soon, but the way I see it, it would have enough advantages to be worth the extra complexity, so at least it should hopefully eventually happen. I guess we’ll have to wait and see if/when it happens.

It will happen some day if industry sees the need or some amateurs just want it.