For those of you woundering how to go about this here’s a video showing the process that I did to add these features to my standard Ender 3 V2.

For the printer I designed, I came up with my own fan/BL Touch Mount as I found (as discussed) that I thought the Creality fan mount was poor and it made it awkward to mount a BL Touch.

Rather than the centrifugal 4010 tip fan that came with the Creality fan shroud, it uses a 5015 fan with a DIY nozzle. I’m still experimenting (I’ve done four nozzles so far and I’m not really satisfied with any of them). 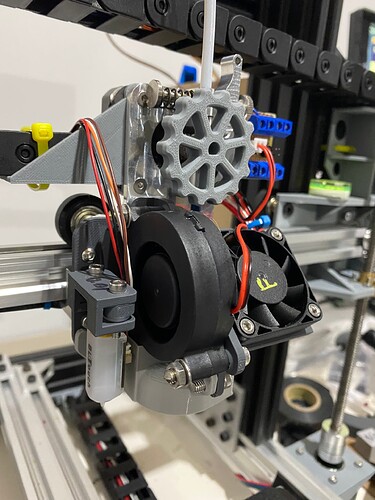 I can put it up on Thingiverse if anybody’s interested.

It should be printed in ABS or PETG and I recommend 100% fill.

I like the fact that you maintained the knob for feeding the Filament through. It’s one of the features that I currently miss on mine. The CR Touch which is Crealitie’s version of the BL touch has the adapters which makes it easier to mount, but I do believe others may benefit from your version because your design seems easier to modify afterwards. Having everything more open is good for repairability, which is a great feature to have.

I’m actually looking forwards to perhaps trying out the version that Micro Swiss makes, since it’s all metal and has a similar design.