As I work through my “Spare Parts Printer”, I’m trying to improve the print quality. In particular, I’m not happy about bridges and strings/webs. When I look at online references to these issues one of the big action items is the fan.

On the printer, I use a genuine Creality Ender 3 fan shroud around a Micro Swiss direct drive hot end: 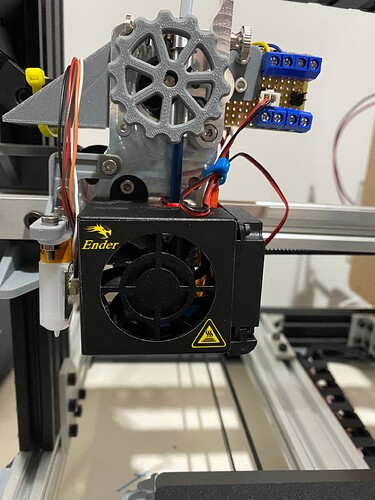 I always thought the fan was marginal, so I looked at my stock of parts, found a matching fan that was rated at 24V and connected it to a power supply to try it out and the difference was incredible! This fan jerked on the end of the wires and produced a lot more air than the fan that came with the Creality unit.

I don’t have anything to measure airflow other than a bent piece of paper that resembles an airfoil that I can see deflection in the fan airstream and the original fan may move it a millimetre or two while the new fan moves it more than a centimetre.

I put the new fan on the printer, with the original Creality duct, did a couple of MINI All In One 3D printer test prints and saw a significant improvement in terms of the bridges and web test sections. It’s not perfect by any stretch of the imagination but it’s a hell of a lot better than what I was seeing. Next steps are to look at coming up with a new duct design/find somebody’s that I want to use to try out.

It is all a matter of how it works for you. One of the first things I did on my E3V2 was to replace the loud 40mm fans on the MB and power supply with 92mm quiet fans. I have not changed anything on the hotend, still using the stock fans and shroud and I have no problems at all. When they die I will upgrade but why fix it if it works. As for why they do it, these machines are built down to a price. If you don’t want to have to do upgrades then you need to pay over a $1000 for a Prusa or some other printer which may not require upgrade but I doubt that even they can get away from some work. These printers work hard and part failure is the norm. .

Thanx for the reply.

Just out of curiosity, how are your prints in terms of bridging and webs? For my printer, the basic printing is quite acceptable but the bridging was more that I would like and the webs are an annoyance.

I’m not saying that I don’t expect a cheap printer to be perfect or that upgrades shouldn’t be a consideration, just that this fan was so poor as to be doing nothing at all and replacing it with something that worked better (yet with a lower current specification) made a huge difference in the quality of the prints.

As noted, the fan I replaced the original with had a lower current specification, so I would expect the new fan to be cheaper than the original. I don’t see this as a case of keeping costs down, I see this as an example of Creality not caring.

If I had purchased an Ender 3 and found this situation with the cooling fan, I’d wonder what else they were equally indifferent about and would be very negative about considering their products (printers and parts) in the future. When I see “genuine Creality part” on AliExpress, I’m not as impressed as I once was and won’t be considering paying any kind of premium for the branded parts.

If Creality put in the same quality parts that Prusa and other more expensive brands do then their printer would cost more then people would be willing to pay. With my E3V2 they put in a better power supply, a better display (but many don’t like it) and a better “silent” MB, other then that they it is basically the same as your E3. The cost difference was considerable. Change all the fans and other cheaper parts and you are paying a lot more.

The most enduring thing about the Ender 3 series is that

As far as how my printer works, I just finished several prints in the last few days and they where all as close to perfect as can be. I have seen many of the YouTube talking heads showing off their prints and saying how good they are and most are not as good as what I get from my Ender 3V2. Bridging over a short distance say 1" is great. By webs, do you mean stringing, if so I get almost none and the little that is there is just wisps that will rub off with a finger.

Lots of people will say that they run temp towers and other test prints to “dial” in their printers for different filaments etc. but I never have. I use the stock Cura splicer settings, with mods as necessary, on all of the different filaments I use and they almost always print great. Same setting for everything.

I have upgraded my printer a couple of new fans, filament runout detector, CR Touch (love it) and a dual Z axis drive plus a lot of printed parts like filament guides and roller spool holder etc. Does the machine print better yes. The CR Touch and the dual z upgrades made a big difference and the cost was spread out over time. I still use glass and glue and I am happy with it, the fancy expensive build surfaces don’t work any better and If I have to wait for the print to cool down before I can remove it from the bed that’s OK.

All in all I still think that the E3V2 is a great printer and it is getting better all the time for less money then the so called better brands. You just have to give it a hug when it is having a bad day.

The more expensive brands have bad day also, they just don’t like being hugged.

P.S. Creality customer support sucks big time but that is why we come to this forum.

Thank you for your comments.

I know it’s a cheap printer but I don’t believe that the cost of fans is that significant a line item in the BoM. I just looked for 4010 24V fans on Alibaba - they range in price from $0.70 to $2.40 USD in onsies and twosies. I imagine that Creality buys them by the thousands, if not tens of thousands.

I hear what you’re saying and I’ve put up pictures of the prints I can get with the unmodified printer and they’re quite good - probably very acceptable for a first time user and I’ve done a couple of prints of structural pieces without any concerns.

It’s just that the improvements I saw on the bridge test model were so dramatic for such a simple fix that I had to say something.

I agree that every improvement you make results in better prints, even fans. Could they use better fans yes and should they yes and maybe they will in time the same way they have upgraded other parts.

One other point I forgot before about the cost of cheap fans. Corporations think in terms of pennies not dollars so if they cheap out on a parts like the fans hoping most people are happy it is a workable solution for them. Saving $.80/printer, as an example, (it could be $5 or 10 maybe) on 50000 printers is money on their pockets. That’s all they really think about. On top of that the people at the top wouldn’t know a good fan from a bad one so they decide on the price.

@mykepredko it may be too late to give advice regarding fans, but I would not give any weight to their amperage rating. I have bought several 4010 fans from different suppliers and then tested them on my bench power supply. Their amperage rating rarely was accurate.
I also built a very miniature wind tunnel to test the amount of airflow these fans put out (using an anemometer), and again current rating had little correlation with volume of air theses fans could push out.

In my limited experience, the double ball bearing fan (although slightly louder) was the winner over the sleeve or hydraulic bearing fans.