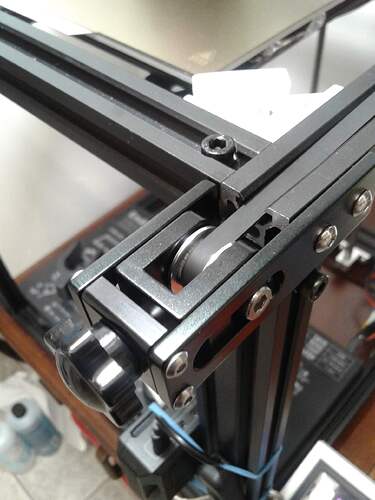 Installation was easy and they do make adjusting the belt tension easier … but as you notice in the picture below the original bearing did not have any teeth whereas the upgrade does. The stock bearings allow the belt to slip ( by design ) and insure a consistent tension along the length of the belt 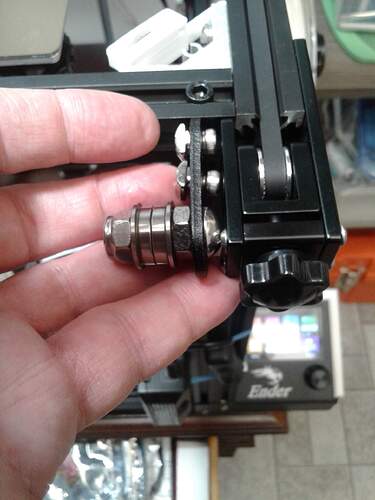 The thing that is bothering me is that the Y-axis & X-axis stepper assemblies also have bearings with teeth and having teeth on both ends seems to introduce in imbalance in the the tension as shown below: the red side of the belt having an unbalanced tension with the green side due to the teeth on both ends gripping the belt.

So, am I overthinking this, or am I introducing a potential ‘belt-backlash’ problem by using these ‘upgraded’ tensioners?

I think you’re overthinking it. Ideally, only a driven shafts or load bearing shafts should have teeth. The belt tensioner you put on is neither connected to a motor, nor to a load so a smooth bearing would have sufficed. That having been said, you will only get a meaningful imbalance in belt tension if the tensioner pulley starts to become a load - that is to say, if it starts to bind due to rust, or contaminants. Now, of course that’s under ideal circumstances where the tensioner pulley has 0 friction, which, of course, is never truly the case, but you can generally get away with assuming the friction is negligible, or at least, balanced by an equal amount of friction introduced by the belt tensioner on the other side.

It doesn’t really matter that the teeth grip the belt since the pulley is supposed to turn freely regardless.The only potential problem I can think of is if the friction in the tensioner pulley becomes so great that, if it were a smooth pulley, the belt would slip which limits the maximum amount of force the pulley can exert on the belt. Having teeth on the pulley prevents the belt from slipping and places a much higher limit on the force the pulley can exert on the belt, but if you’ve let the rust and dust go this far, you’ve got other problems.

The real question you need to address is whether you’ve seen printing problems?

Belt tension isn’t changed often in either case. If you are worried about it it looks very easy to swap out the idler for smooth idlers, you already have them.

The stock smooth ones don’t fit. I just went back to stock.

The Only Problem i’ve come across with Knob tensioners is People Routinely over tighten them
This will actually cause ringing and other issues.

It doesn’t really matter if Idler pully is smooth or toothed. If belts have proper slack it’s not going to affect anything.

NOW!! if Printer was a CoreXY where belt must be quite Tight. Then that’s a different animal!
On Toothed Sides use toothed idlers, on Smooths sides, use smooth pulley.

Due to Extra Tension the Belt would Raise and lower as each tooth comes on and off the Smooth pully.
Where a Toothed Pully, the Teeth are Supported on all faces and nest nicely into the “Pockets”

Due to Extra Tension the Belt would Raise and lower as each tooth comes on and off the Smooth pully.
Where a Toothed Pully, the Teeth are Supported on all faces and nest nicely into the “Pockets”

Good point. I hadn’t thought of that.

I had the same issue with belt tensioner on my V2. I just swapped the bearing out for the original toothless one and all was good.