BIQU B1 hot end and now bed not heating

Make sure all your connections are tight. When a heating element or thermistor “seems to have sorted itself” that’s almost a sure sign of a loose connector.

on the B1 the thermister has another connection inside the print head on a little board inside. the wires in there are routed very tightly and if you disturb them you can disconnect one easily. it’ll give you those kinds of readings if it.s not connected or has a broken wire. Also Where the thermister is in the heater block there is a screw that’s supposed to hold it in its hole, it is clamping on the wires and could be another pint of failure.

Turned checked the connections again and got it to heat up now so yay one thing down… this all started with trying to get it to extrud…printer was working fine till today…it will heat up and the extruder is trying but no filament out the hot end even if I try and push the filament manually nothing I checked multiple times mo clogged.

Yea its heating up now after being off for a few hours…now to get it to extrud…even when heated I can’t get filament out the hot end. And check not seeing a clog

Can you pull the filament back out when the hot end is hot? I’m really going to leave this one to someone more familiar with the BIQU B2 hot end as I don’t know how it’s structured. What I refer to here is based on an Ender 5Pro hot end so there may be some differences.

If the filament was allowed at some point to heat up enough, it can melt all the way up to the Bowden tube and form a ball of filament that binds it in the tube itself.

If that’s the case, you’ll have to pull the Bowden Tube out, carefully heat the end of it with a match or similar heat source until the ball melts and pull the filament out.

If the filament can be pulled out but not pushed in such that it extrudes, Try doing a cold pull: 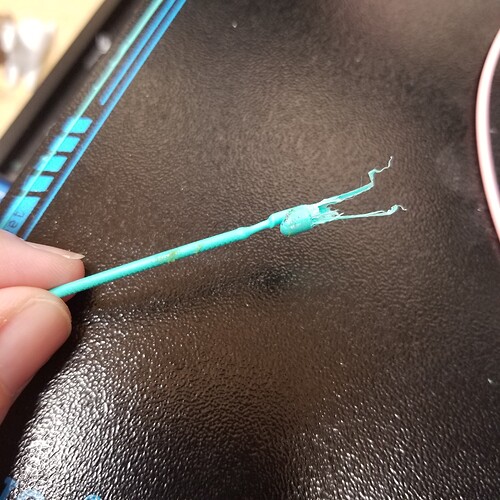 There seems to be something stick residue on the filament. I have a Bowden tube cutter to get the degree angles some of the residue that is sticking seems to be on the end of my Bowden tube as well

Usually the end of the bowden. Tube needs to be trimmed because the ends melted. Thers a procedure in steps to putting it back. Basically leave the top coupler loose 1/2turn or so, push it in had then tighten the coupler. Did you have the nozzle off?