I was printing some stuff with carbon PETG and Filaflex 82a and was getting some curling on overhangs so I decided to go a bit of an adventure trying to design a new cooling duct for the Micro Swiss direct drive on my printers.

I thought about printing one of the Hero Me or various other cooling systems but I wasn’t thrilled how many parts they print in and how some of them if you need to take off the fan shroud your BLTouch mount gets removed with it. I want the BLTouch to always stay attached so that I don’t have to check the Z offset every time I pull the fans off.

Version 1: Single 4020, duct in front of nozzle and was too close to heat block and started to melt 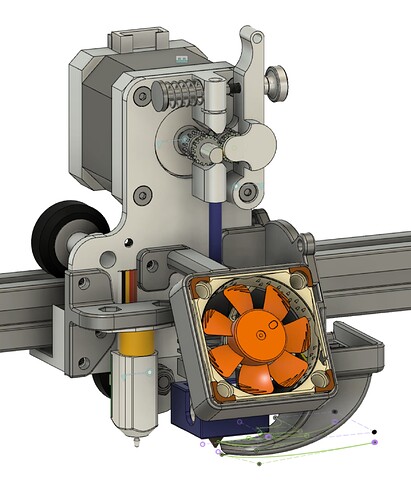 Version 2: Single 4020, moved the duct to the back, rotated the fan 180*, more clearance for the end of the duct so it seems to be far enough away not to melt, but it was too directional from one side 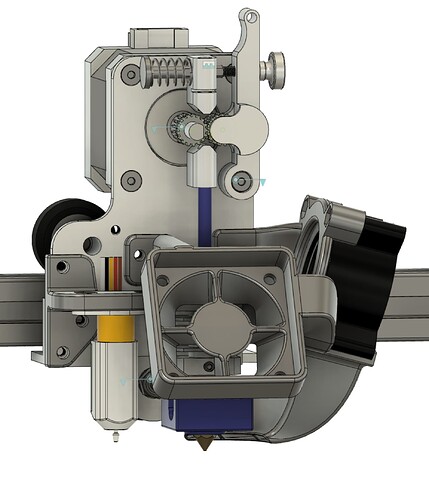 Version 3: Dual 4020 with opposing ducts, modified mount to have more than one bolt, seems to cool better but is way more bulky. Yet to be determined if I stick with this one or move on to version 4. So far this one seems to have better coverage for cooling so it isn’t directed only at one side of the model 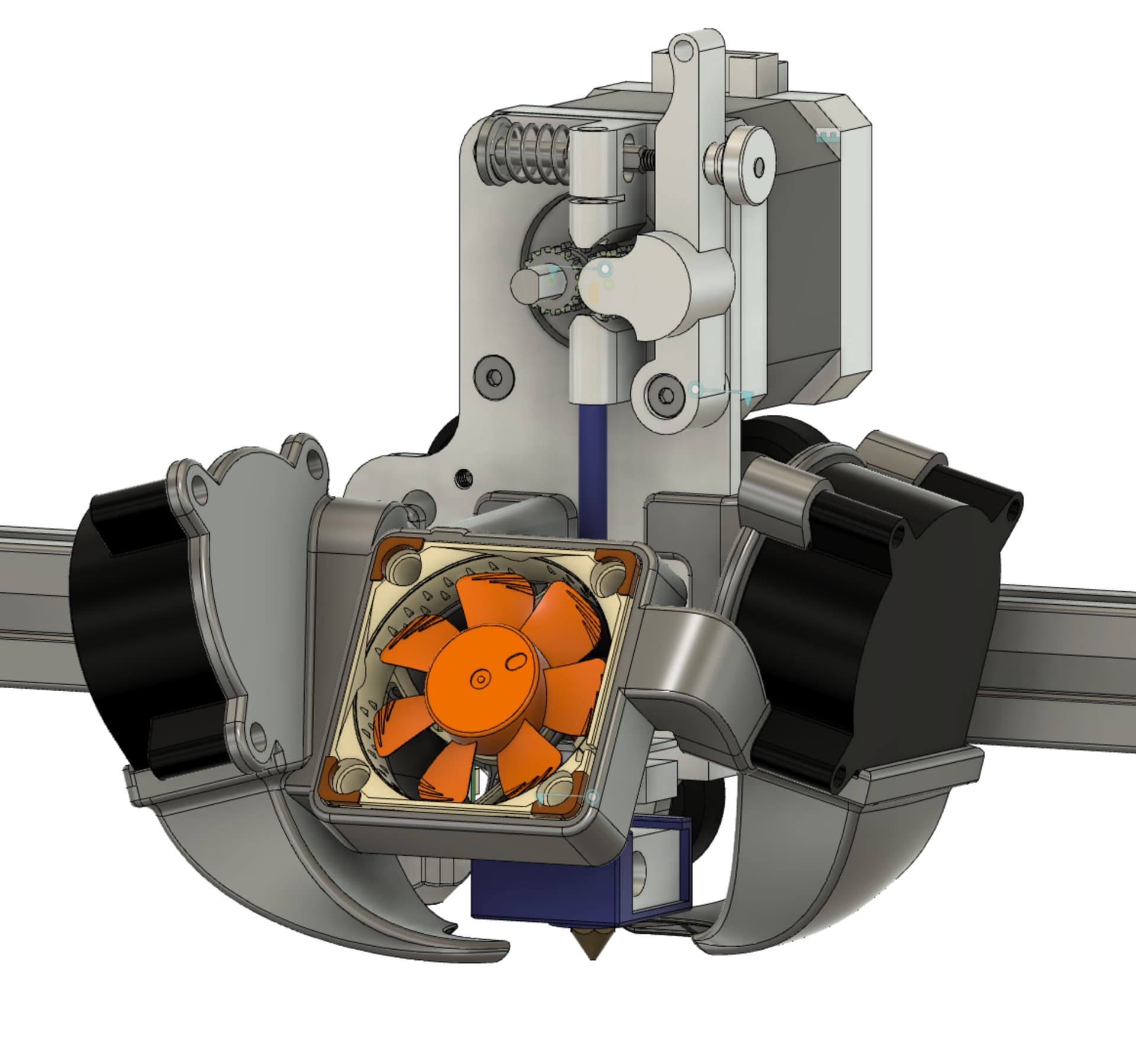 This is the pile of attempts. I had a few print failures because resin is a finicky beast when it comes to supports etc. 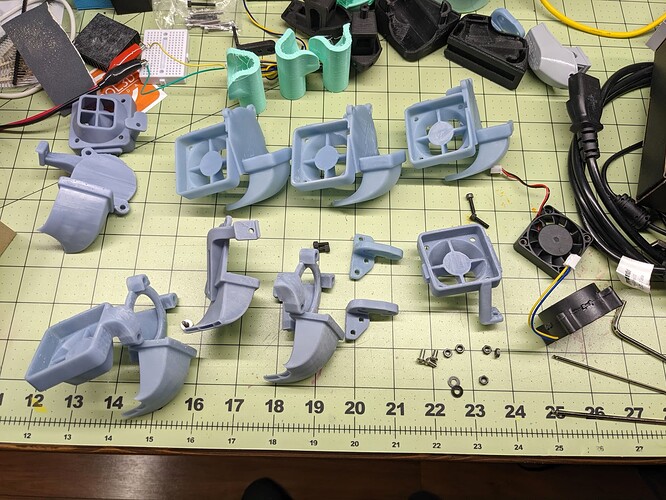 Version 3 needed to be split up into 3 parts because it got too big to fit on the build plate in one piece so I chopped the model and added some slots and grooves to put the parts together. It also made supports and slicing easier since I could orient each piece separately. 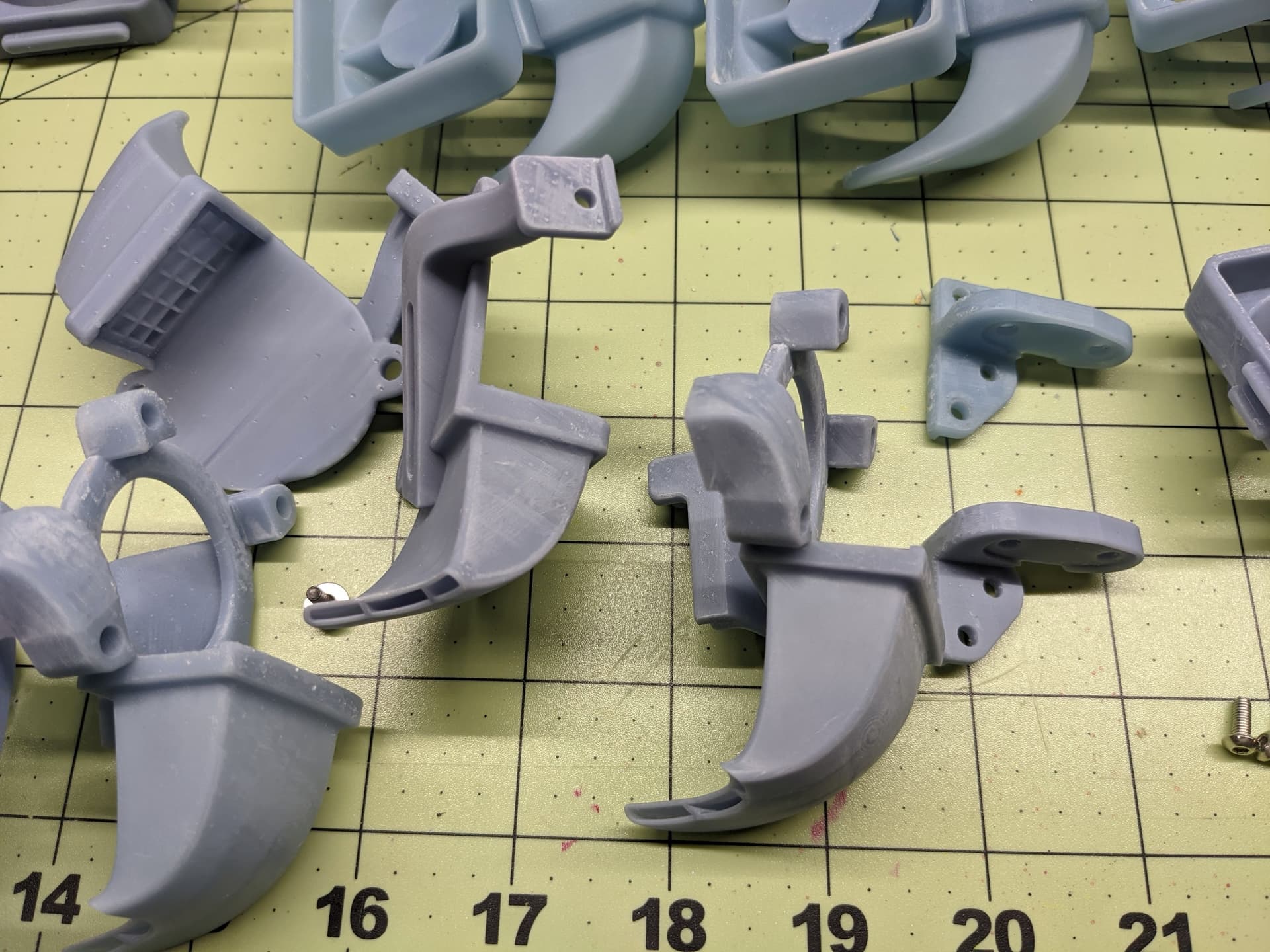 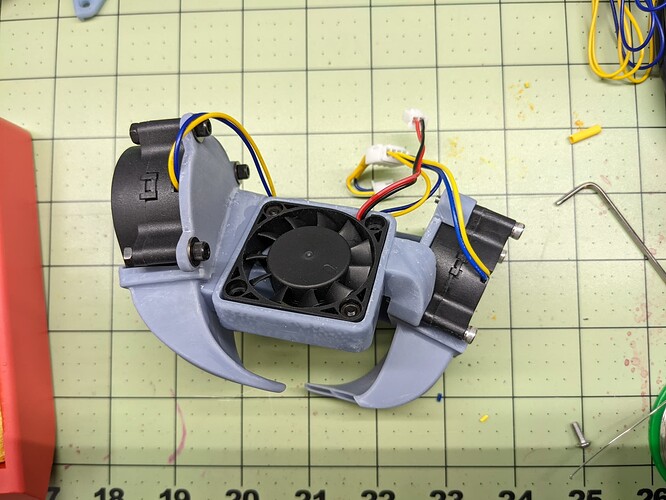 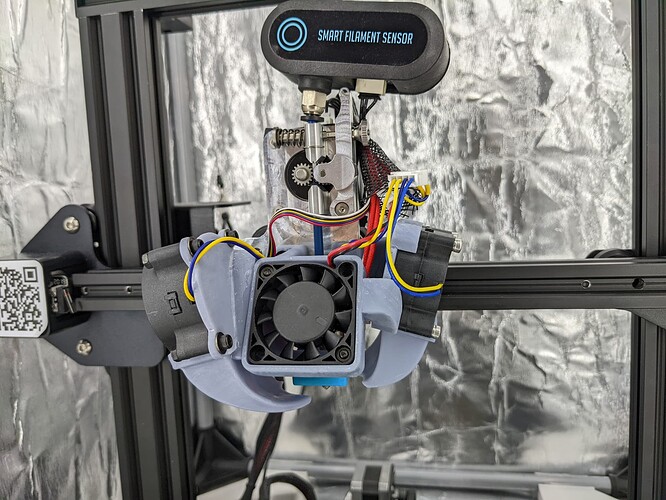 I printed it out of resin for a few reasons.

Here’s a before and after of a Benchy printed with Recreus Filaflex 82A. The overhang on the bow was a big problem area since each layer was curling upward causing a lot of deformation. Feel free to make fun of how bad the stringing is but this stuff prints like snot and I really don’t think I’ll be able to get rid of it. Basically I’m choosing to live with stringing to get more consistent extrusion. 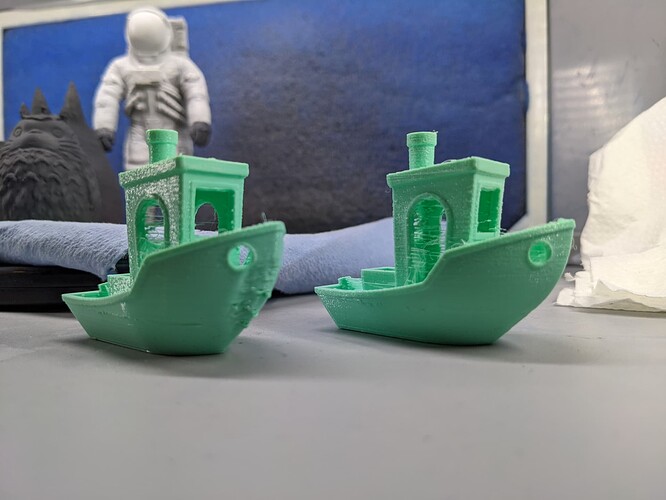 Printed in Monocure Tuff for anyone that cares.

At some point I want to try blowing my smoke machine around the fans so I can actually watch what the flow coming out looks like to try to reduce turbulence and improve coverage
My next attempt I would also like to design in a quick release system and improve access to the nozzle so I can wipe gunk off while printing or ideally be able to easily nozzle change without removing the duct.

they look good! Lol Fluid dynamics are wacky. I have flown kites and built boats, I have spent a lot of time looking at how fluids react to contours and surfaces. Turbulence in air or water is very conplex and hard to predict. The amount of effort and money poured into wind turbines and still the effects of fluid dynamics has not been completely predicted, and unexpected issues arise because of it. I think the fog or smoke is a good idea! Keep experimenting! 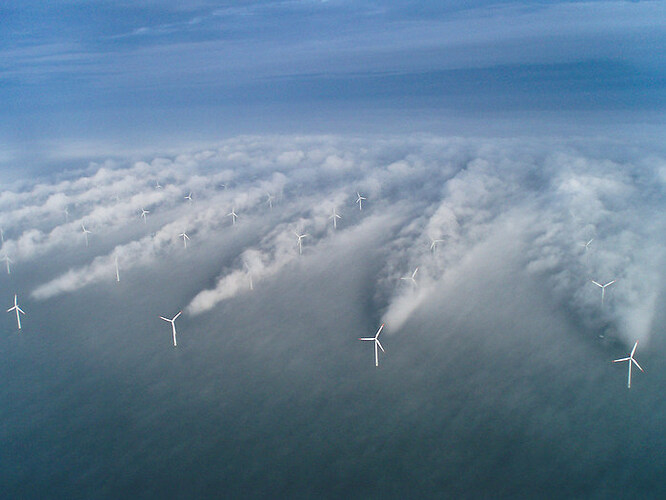 I’ll keeps playing around with it for sure. Maybe with my next round of changes I could try printing it out of clear so I can see what the smoke does inside of the duct as well as the flow coming out.
For the next prototypes I think I should just print the duct without mounts to reduce material use. The student budget is not great for blowing through resin too quickly.

Bigger corner radius might bump efficiency. A square corner could cut air flow by (if memory serves) 20%. Its going to be a give and take function against what shape will fit.

For sure. I tried to have as little kink as I could in the duct. Between version 1 and 2 I rotated the fan about 15* so it smoothed out the transition to the exit. Like you said it is a trade off of what will fit in the space without having the fans hanging way off the sides.
One side of the entrance sees very little air flow into it since it is on the upward spinning side of the blower so that is usually where I was a little more accepting of the tighter radius in the duct.

With boat design almost all traditional boat plans are ‘faired’ a big bendy stick is used to smooth the lines. The eye and hand of the builder expands on it again. It is effectively the same if it looks right and feels right, it is right.

One thing I learned on a diferent project is that air moves best across air and not other stationary surfaces so the better surface is made of a boundary layer of air, like they do with golf balls and their dimples. On a golf ball the dimples are on the outside and easy to make but with additive processes like 3d printing you could have dimples like that on the inside of things to preserve that boundary layer.

@Glenn that’s a cool idea. It would certainly make for an interesting experiment testing a duct with and without dimples.
I really have no idea how I would efficiently go about modelling dimples on the inside of a pretty complex curved shape using Fusion. I think it might turn into a task for surface texturing in something like Blender but that’s a whole different learning path to go down that is on my list but not started yet.

Yes, they’ve added a few tools in F360 in the last couple of years to make this easier and surface texturing just recently, but it’s still best to use surface tools to do it. actually, they’ve added so many things I could use recently, and then there’s today where I spend 1/2 hour looking for how to make a dimension driven because I was remembering the shortcut in SolidWorks that doesn’t work in fusion.

It was a awesome design!