Hi all. I doubt this is specific to the CR10s PRO v2, however that’s what im printing with so I posted here first.

for testing I am using a small print with a large (20mm, or sometimes even 40mm) raft so I can see how the first-layer is being put down… honestly it looks perfect… lines are straight and consistent… But the adhesion is HORRIBLE…

Ive cleaned the surface with IPA, which does seem to help… however its not a good enough adhesion, things are barely stuck on… a medium print would 100% not stay attached for the duration.

Can anyone suggest something?

I would suggest using a bed adhesion. I generally use Elmer’s purple glue, Great adhesion and cleanup with water.

Thanks, I had forgotten this trick… Just doing some test prints now using the purple glue… First print was defiantly and improvement… however, not “super strong”… The QIDI TECH 1 I just retired would bond so well I’d have to hit the putty-knife hard… really really hard to get things to let-go… so hard that I was 100% sure I was messing up bed levelling and alignment and even upsetting the neighbours…

Out of random curiosity… .have you ever tried the AMAZON purple glue? for less than $13 I just received about 25 sticks of it… haven’t tried it out yet, but for $13… why not…

Many glue sticks use a PVA or PVP compound of one version or another this is similar to many hair sprays as well, and most white glues.

It is a polyvinyl compound and these compounds are a thermoplastic much like filaments. I would suspect that amazon who is just rebranded something is quite possible a PVA type. It is quite common. There are a few starch based glue sticks now the smell a bit like grains. Oddly they also work ok not as well but… if you look up the SDS sheet it might give you an inkling.

Greetings and welcome to the forum.

When I switched from the Creality magnetic build plate to 3DPC’s Carbon Fibre build plate, I also had issues with parts barely sticking, so I switched to using Elmer’s glue sticks.

I switched to carbon fibre because I wanted something flat since my hot bed has a bulge in the middle of it and the magnetic plates just conformed to it. Anyway, I had tried glass but had two sheets shatter due to thermal issues (they were from a Longer L1 printer). So, since I was experimenting with a new surface, I also experimented with different glue sticks. My wife works in a daycare so I didn’t mind buying extra glue sticks because I could just give her the crappy ones for the kids to use.

Anyway, the lesson I learned from this is that the Elmer’s is the best (of the ones I tried). Off-brand/house brand/no-name glue sticks were generally crap, and even if it did stick I figured that since these store brands are just re-labelled products the store could source cheaply, there was no guarantee that the next batch would be consistent.

In the end, I now stick (pun intended) with Elmer’s since, as far as I know, they make their own glue so I expect it to be consistent. Elmer’s plain and Elmer’s purple have the same adhesion, so get whichever is cheaper.

As a side note, Elmer’s on a Carbon Fibre build plate results in adhesion you could almost lift the printer by. I’ve been tempted to try it but since my Ender 5Pro only holds the plate on one side, I was afraid I might bend the Z-axis lead screw if I actually tried it. I did try once to about 75% of the force needed to lift the printer but stopped when I realised it was starting to flex the Z-axis guide rails. For removal, I let the build plate cool and put the spatula at the bottom corner of the model then whack it with a small hammer.

Do you have the original build plate? I just got my cr10s pro v2 last week, and once I got the bed level done, adhesion is almost too good. I know its harder to get the prints off then flexible, but just for the sake of testing. Also what type of filament are you using. I’ve heard PLA works well with PEI but PETG not so much.

Welcome to the forum, You are correct, PLA on PEI works really well but never use it with PETG without some kind of a barrier in between. PETG bonds to PEI and will actually damage it because it won’t release from it.

Post up some projects you are working on or issues you have, we will get you up and running not an issue.

Thank you for the reply. I am printing PLA and of off the Creality PEI dual sided upgrade surface… the textured side.

Im getting prints out, but just now had to cancel a print because of warping… which if I understand, is typically because of too much heat… but if I dont heat to 70* bed temp for layer1, I dont get adhesion… .and even still I have to clean it with IPA and add glue each time…

I’m beyond frustrated with this “upgrade PEI Creality plate”.

Hi @Jason - I cannot say that PLA is working at all with the Creality PEI dual sided magnetic plate that I got with my CR10s PRO v2 last week (btw, shipping time was amazing! did someone from the shop literally drive it to my house LOL)

And still unless I clean with IPA and then add GLUE I cannot get adhesion to this plate. I understand the Wham Bam plate is “the go-to” for upgrades, but @3d Printing Canada recommended I not go that expensive and get the Creality version of the same… and well Im kind of upset…

If I print at 60* bed temp the first layer just peels off with any pressure at all… the slightest touch and it moves… so as soon as the build is 1 or two more layers high, thats it… failure…

What am I doing wrong??? Im sure it is me… but I cannot figure out what Im doing wrong.

Did you calibrate the z height? can’t speak to the creality PEI but Prusa pei grabs like crazy I have 4 plates two original smooth one textured and one satin. they all work very well.

The only time I have issues like you are describing is the z distance is off and it is usually not close enough. The PEI plates vary in thickness so they must be correctly calibrated.

HI @Hookup9 , I am with Kite on that one, Sounds like the Z-offset or Babystep may be a little high.

I never have to use vertical extrusion or horizontal expansion to get adhesion.

Can you start a print and just post a picture of the first layer?

@Kitedeamon & @Jason - 100%… I was printing the first layer for a photo using 0.16mm extrusion and the entire thing was a mess… (Photo) - Im in-process of adjusting the z-offset during print…

Question - does the machine save the z-offset changes made “during print adjustment”?

At least some of the issue is z-offset…

However, as the printer is printing the first layer, I can see it put down straight clean lines, but when the line changes direction the “stream of PLA” is lifted right off (not stuck to the bed). I’m continuing to adjust down the z-offset to see if I can get some different results.

That’s awsome, Looks to me you have a little more to go but for sure on the right track

Depending on the firmware if it will save it or not, Usually I go to the config menu and hit “save” or “save to EPROM” after adjustments are done to save it.

ok, here is a bit of information that might help… All adjustments done during print… only adjusting the z-offset… Adhesion still was quite poor… the print peeled off super easily without having to remove the PEI sheet… I couldn’t flick it off with my finger, but it peeled so easily I’d say I am still having issues.

Overall: I moved the nozzle a total of .22mm across the print… though the surface still looks pretty uniform… Also adhesion is still not any better… (other than section 1 which was way too close to the bed, everything is better than that.)

At -2.62mm the nozzle made contact with the bed. Ignoring the outer circle (it was done while adjusting and you can see top left where it is really thin, that was -2.62mm/bed contact) 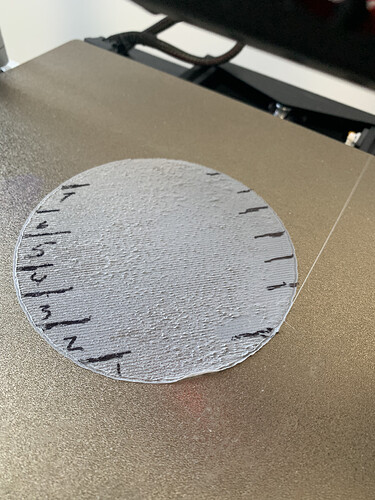 the secondary issue I can see is it looks like the bed is a bit too hot. That rippling or “orange Peel” is usually causing the bed to be hot. The second part is that looks like a textured bed so you could actually run that pretty tight. Remember to have to press enough filament into the divots to allow the adhesion to take place

Pull the print off the bed and look through it at a light, see if the layers are adhering together or if the first layer is super thin, My knee jerk reaction is that you would be able to go a little closer still.

@Jason - thank you. Right now im printing this over and over again… tweaking… Lowering the bed from 74* to 70* has eliminated the orange peel effect almost complete… 0.2mm layer thickness is looking pretty good and adhesion seems to be good.

Im now trying a layer thickness of 0.12mm or “fine detail” if you will… (I think im using the right term). I suspect I’ll have to tweak a bit more in terms of z-offset (likely lower as you suggest).

I think you have me set on the right path here. Thank very much. if I run into more snags I’ll post up here (if its adhesion related) …