I have been tinkering with custom designed modifiers for my designs recently. I find it intriguing and was wondering if anyone else was doing similar?

I use Prusa slicer almost exclusively these days my M2 Mac and Cura don’t get along, slow and unstable. I think you can do the same in Cura but I don’t know how exactly.

The ability to add a modifier shape to a design and change infill or whatever else is very powerful. Now that you can add your own shapes as a modifier allows complex internal structures. The most practical thought I had was a model aircraft wind you could have the external surface designed and then design an internal (printable) structure, perhaps an spar running through the whole thing with webbing to tie the wing surface to internal spar. Then bring the wing shape in and select “add modifier” “custom” and bring in your internal structure as an infill modifier and slice the design with no infiltration but set the modifier as solid infill. This would give you a one piece with solid supports internally tied to wing surfaces with out trying to print them separately.

Clearly caution would be needed if the internal structure wasn’t a printable object it would fail spectacularly.

I don’t build model planes so this is just a supposition. I did design a bathroom knob and did basically the same thing.

Thoughts on how and when to use this type of setting? I though in a way it is like dual extrusion but not exactly. I wondered if it could be used with translucent materials and create interior ghost designs, with variable density. 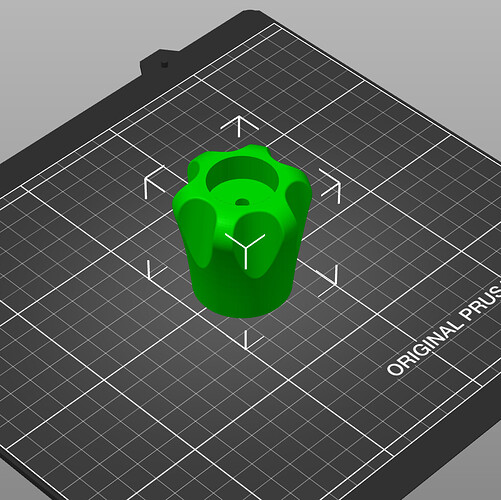 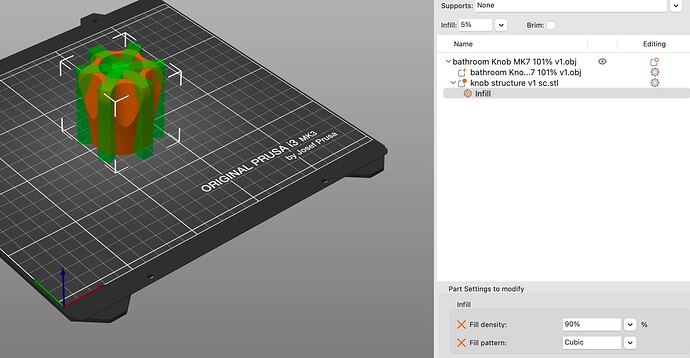 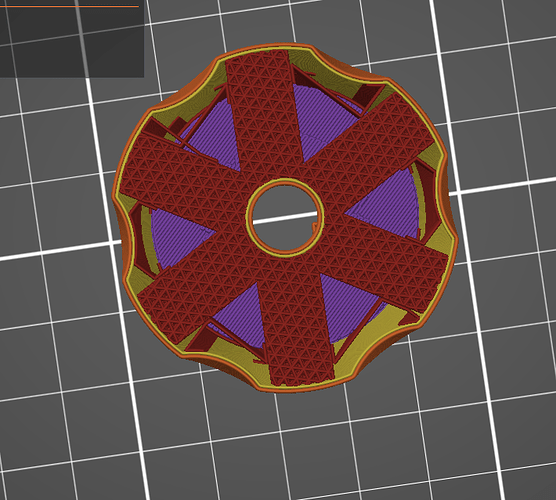 If I understand you correctly then there is a way to do this in Cura by using blockers to change the amount of infill density.

I have watched some vid’s on R/C model that have been printed out, usually small ones and they have a printed interior structure, sometimes like a real aircraft and sometimes not. Most of these files are for sale as “ready to print” so the actual design process is done in CAD and not the slicer.

This seems like it would be useful and a good tutorial on this would be nice.

I’ll give a tutorial some thought. I don’t really know the best way to use the feature. I mean I could load a benchy as a support but what would you do with it? It is very interesting that ANY STL, OBJ (ect) file can be used as a modifier. If you didn’t have design experience it could be really handy.

If could be a super fast stand for just about anything. I keep feeling like it might work if an stl was used as a support inside something else at really different density’s. You should ‘see’ it inside. A ghost image inside a second object. As soon as my big print finishes I am planning on fiddling with it.

I have an older Mac that I use for slicing and I can’t install Cura beyond 4.11 so I’m looking at PrusaSlicer as well. However I’m finding it tricky to get it set up since I’m so used to Cura. Guess I just have to spend a little more time with it.

I can run (just it isn’t all the way stable) Prusaslicer 2.4 on my 2009 MBP. It is one off the newest. I would suggest a bit older like 2.3 final. It ran perfectly on the the poor old thing. I can sorta run Cura 4.0 on it but it is really really slow. On the M1 Prusaslicer is well fast often so fast when i hit slice it is just a flicker and it is finished. Instant or close. The M2 in therory is faster but I simply cannot tell it is beyond my ability to notice. Cura on the m1 is ok about 30 seconds to slice a benchy. But if I rotate the build plate it crashes. I don’t miss anything in Cura as Prusa slicer has everything I used and more.

I am going to work on a tutorial and some variations on what I thought to load to stl files for I just have not found the time yet.

I’m running Cura on my 2011 iMac and it works pretty well but I can’t upgrade to 5 since it doesn’t support the OS and I can’t upgrade my OS any further cuz they changed the chipset. I’ve started playing with PrusaSlicer but am struggling a bit because I don’t know where everything is as well as I do with Cura. Will just take some time I suppose…

As with all things. Make sure you open the advanced options. My advise with all new software is don’t try to replicate old software you will always fight it. Just try it on its own and see what you think. You might find you don’t need the things you used to do the same way. Generic software advise it applies here however. I have a ton of old macs (3 mac pro towers a G5 tower lol, 5 minis, 1 mbp, 2 mb, m1 mbp and loan of an M2 max studio.) The new cura has issues on most, too new for the old timers and doesn’t like the ARM line. The nice thing about Prusaslicer is Jo Prusa is a mac user so it is often released the mac version first and it is stable.

Jo Prusa is a mac user

Ahha! another thing to be suspicious about!!!