3D printing friends. I cannot get my printer to home properly. I have updated firmware and adjusted the z stop but it always settles 1.5 inches above the plate. I can’t level any higher. When I hit auto home again it just gets higher. 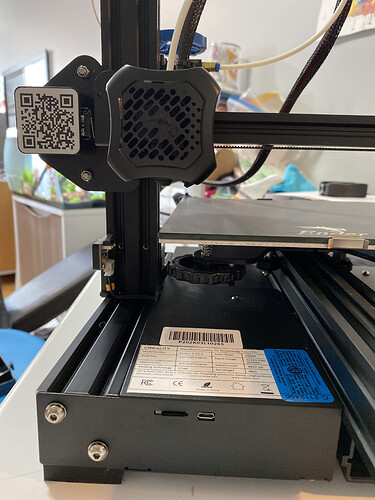 Does it come down all the way and trigger the Z endstop, then go back up?

Or does it just stop higher up and never actually hits the endstop?

If it’s the first, it may just be your z offset needs to be reset/calibrated. It probably got wipes with the firmware flash.

It never goes down. When I got auto home multiple times it just gets higher off the plate. The only way to get it lower is to disable steppers.

Was this printer working well and then started doing this?

If yes did something change if so what?

Is there any chance the Z stepper has a reversed wires?

It’s brand new. The z stopped wire was attached internally when before I put it together. I will see what happens if I switch them.

Thanks I am a newbie, so this feedback really helpful.

To be honest you might want to contact support. If they determine you need a part they will send it to you.

I don’t have any experience with your particular printer so my suggestions will be more generic. You will have to figure out what applies to that printer.

First, some explanation of what it’s doing and why. When the printer tries to go to it’s home position, it usually move the X axis first, then the Y, then Z.
Z is the most risky since moving the wrong way will drive the print head into the build plate or glass, as the case may be, so the safest approach is to first back the Z-axis away from the build plate and then slowly lower it until the limit switch is triggered. You are seeing the backing-up part but not the movement down until the limit switch is triggered. That means only one thing:

Your Z axis limit switch is already being triggered.

Check that there is nothing hitting the switch and that the switch lever can move freely.

If it can move freely, check it with a multi-meter. It should change resistance when you press on the limit switch.

If it doesn’t change resistance, then the switch is bad.

It’s also possible, depending on the design of the switch module, that the module that has the switch mounted on it may have there pins representing NO C NC (C represents “Common”). So, if that’s the case, one of the two wires should be on C and the other should be on on NO or NC. Whichever one it’s on, change it to the other.

It’s possible the other end of the wire has come out of the connector on the controller board. You may have to open the case and verify that it’s plugged in properly.

There is a slim, very slim, outside chance that the firmware on it is not correct and has been configured to expect the wrong type of switch, but I would lean 99.9% toward either a wiring error or a defective switch. Do not try a new firmware until you’ve verified the switch works and the wires are hooked up correctly all the way from the switch to the motherboard.

Thanks. I discovered the wires going to the the z stop were damaged when I went to see if everything was connected. I have contacted 3D printing Canada’s do get a new one sent out.