Hi everyone, I have an ender 5 plus. I have upgraded to the microswiss direct drive. It has been working fairly well since the upgrade. I continue to have an issue with the first layer on the build plate being a little uneven or ragged looking on one side. This is despite leveling and also doesn’t seem to bother the upper levels. I did test print with 5 squares in diff parts of the plate and it seems to print well in some areas but not as well in others…

Second issue that is new is that im getting strings and occasionally small clumps of filament on the prints…not like usual fine stringing that i’ve had elsewhere. 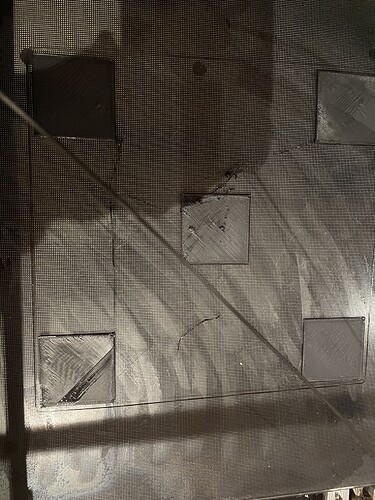 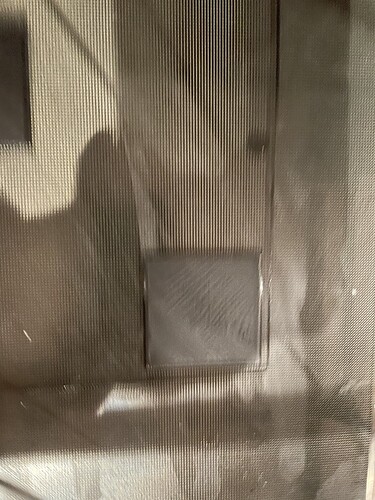 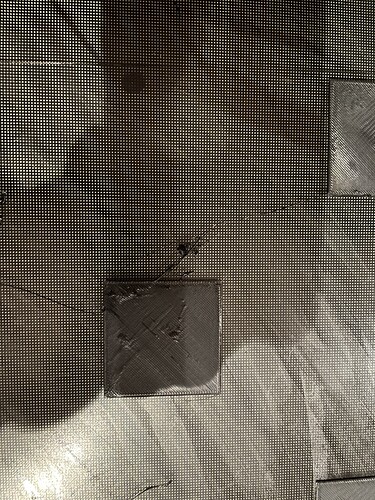 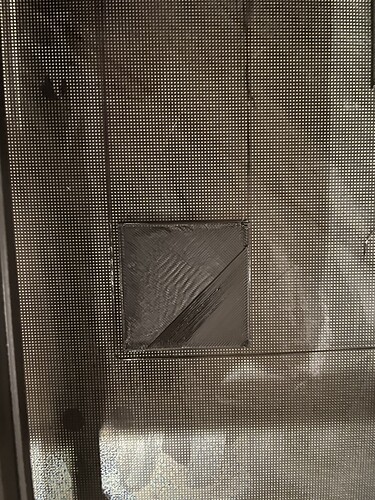 pictures attached…as u can some squares came out ok while others clearly are not.
Any help would be greatly appreciated.
Thanks
Kris

To my eye they look too close. the bit of paper syndrome, a business card is better. You could also have extrusion amount issues but it is hard to tell, one thing at a time, correct the z offset first. the nozzle is too near the bed.

I’ll agree that the nozzle is probably a bit too close, but you may also have a warped, or at least, un-levelled bed if you aren’t getting consistent results from all five squares. Too close to the bed results in a rough texture as the nozzle ploughs through previously laid filament. Too far results in filament being extruded that doesn’t get sufficiently squished into the bed, doesn’t adhere well, and comes loose as the stringing you described. Strictly speaking, what we generally refer to as “stringing” is the result of a print head movement after the extrusion has stopped but which hasn’t retracted enough to sever the connection between the just-laid filament and the filament still in the nozzle. That connection gets drawn out as the head moves in a wispy-thin strand that gets thinner the farther it goes (because no no filament is being extruded). The thicker stringing you described is (likely) deliberately extruded filament that didn’t stick to anything, usually because it was too far away.

Of course, the unspoken assumption being made by all is that the bed is clean and made from a material that filament actually sticks to. On my Carbon Fibre bed, for example, direct adhesion is very poor for PLA, so I use a thin coating of Elmer’s glue stick. Mind you, if you needed that, nothing would be sticking anywhere.

The other insidious problem may be that your bed is not flat. My Ender 5 Pro has a bulge in the middle of the bed, therefor if I used a softer material as a bed, like the Creality Magnetic mat, I would never be able to get more than the center and two corners to the right height (or the four corners while the nozzle digs into the center). That’s why I bought a carbon fibre bed surface - it’s dead flat.

Ive adjusted the z-level…im doing a test now. I have checked the bed and its actually really quite badly warped. One of the guys at the shop suggested i check…i used a right angle on its side and wow…it is really warped left to right…like 2-3 mm…perhaps that explains the ongoing issue with a rough bottom few layers.

If the bed is 2-3mm out it will never print well across the bed. You might get a section to print ok but never across the whole thing. I would replace the bed at this point.

yes, I had assumed I would need to replace it. I am not sure if thats a warranty thing. Any suggestions for a good upgrade plate? I print mainly PLA and PETG

If its still underwarrenty it totally is a warranty replacement. I don’t have a Creality but I do have a sidewinder and they are owned by the same parent company so likely similar. Lets hope it is easier. I got the first new bed from the seller, the second I got from Sidewinder but I was forced to buy one inbetween as it was 10 months for the replacement. I would open a warranty claim. Companies using clients as beta testers is unacceptable and they need to be called on it.

As stated by @kitedemon , it’s definitely a warranty item, but if you have trouble or can’t wait for parts, or the printer is past it’s warranty period, consider 3DPC’s Carbon Fibre bed.

I see they now have a 1mm thick “Flexi” one but all flexible build surfaces will conform to the warping of the underlying aluminum bed. I bought the 4mm one because it’s solid (won’t flex) and I clamped it to the aluminum bed with four paper binder clips.

Thanks! I think i will upgrade to that! I fixed the strange problem with the thick threads and globs of filament. It had been suggested the the nozzle was damaged so i bought a replacement one. When i took the fan off to replace the nozzle the heat block was covered with melted filament…i cleaned it up and discovered the nozzle was 2 revolutions loose. I’ve never had one come loose before, I thought if tightened when hot it should be in there pretty snug. I tightened the nozzle and cleaned off the block and its been printing clean since (other than the bad first layers which i;ll replace the bed for)
thanks

Keep in mind that if you’ve had to tighten the nozzle two turns, the nozzle will therefor be higher than it was before. You’ll need to adjust your Z-offset to account for it.

Yes, had to readjust it and now it is printing well