I have placed the DD upgrade form microswiss on my Ender 5 plus and now (even after a few good prints) it won’t extrude….? Thoughts?

I’ve tried to change nozzle, checked to see if it was clogged. 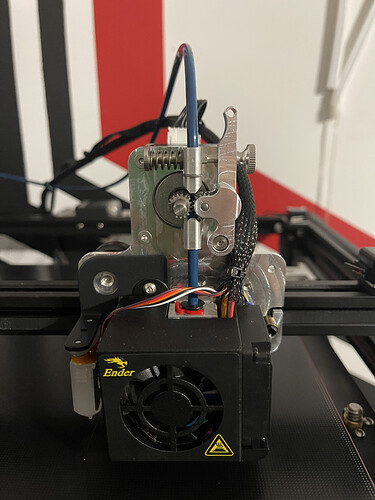 Stepper motors are entirely dependent on signal timing. When they rock back and forth, it’s almost always an indication that either the timing is bad or some of the signals aren’t getting through at all. I gather you had initial success with it which would mean the stepper motor control cable is wired in the correct order, so that eliminates one possibility.

Check that the stepper motor cable is plugged in properly at both ends and hasn’t just been pulled loose. Direct drive systems, where the extruder motor moves with the carriage, are particularly vulnerable to the cable getting snagged on something. It’s the same thing that causes layer shifting. It’s possible the cable has been partially unseated.

If the extruder motor can be controlled via the Y-Axis cable, try plugging the extruder cable into the Y-Axis motor and moving the Y-axis by using the control panel controls for the extruder. I’m guessing it won’t work, in which case, take a very close look at the cable ends. Make sure all the pins are correctly seated in the connectors at both ends.

Let us know what you find out.

Too add make sure the polarity isn’t reversed.

Once I did this it worked!! Although now when I press “feed” it pulls the filament out and when I click “retract” it feeds the filament.

Do you know how to fix this…. (Still very new here)

Thank you a MILLION

The extruder cable is either inserted backwards or wired backwards. If the connector won’t allow you to turn it around, it can be “reversed” in the firmware settings.

I was testing this to verify what I’m saying and discovered something I wasn’t expecting while issuing GCodes to reverse the extruder direction. I won’t post it here to avoid confusion until I’m more certain about what I’m talking about, so in the mean time, try reversing the connectors at one end or the other.

Thanks a ton I’ll try it this week

That actually isn’t it backwards, a the direct drive links the feed gears it pulls from both sides rather than one side this mens as needs to run the opposite direction to draw in with two gears.

It is typically solved with Firmware. reverse the extruder direction parameter.

Perhaps I’m not understanding you, but…

Putting gear teeth on the extruder drive wheel so that it engages corresponding teeth on the pressure wheel doesn’t require it to be run backwards. It just means the pressure wheel has teeth whereas regular extruders don’t. It still turns in the same direction; it’s just that it positively engages both sides of the filament while doing it. I couldn’t find any examples in Google Images of a dual gear extruder that was anything other than a pressure wheel with teeth: 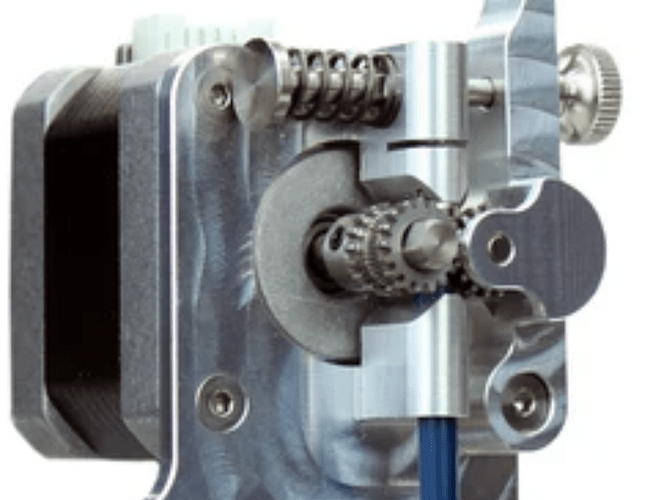 Also, your link to Direct Stepper Move (G6) refers to a memory management technique that allows stepper motor movements to be stored in RAM so that the host feeding the gcode (Raspberry PI or computer) doesn’t have to wait for the previous GCode to complete. This frees up the host. The printer can then execute the movements directly from RAM when the time comes.

Unless I’m seriously mis-reading it, or you meant to link to something else…

Sorry that isn’t explained well. The stepper idler on the left or right changes the direction. It is on some printers opposite for cable management . Since it is running backwards and the JSTXH are keyed I assumed it was the idler, I didn’t think the OP cut the tabs off the connector to connect it upside down. If there is a Dupont in the XH, rewire the machine and fix that! It is a serious fire issue.

I have not installed a direct drive but I have uninstalled one for a friend. We saw the idler was opposite orientation and switched the direction in firmware. Not being an expert in firmware and the only time I did was not Marlin I just found the stepper direction commands and linked it. If it is in error sorry. We only changed true or false.

Re pinning is fine too what ever is easier, Although the tabs sometimes break then the OP needs the right crimper or soldering iron.