I have the Ender 5 , the first, model, and I went to update the firmware with the newer version recommended. Now the z axis locks up hard and gives a fault, no movements from any other motors, z end stop will not work and there is a whole list of other surprises. I have tried looking for the original firmware which came from the factory load but unable to find it. I have tried to contact Creality a number of times and still waiting…? It’s strange, I have tried a newer board from Creality with the firmware flashed on it and the same problem. Any ideas???

What happens if you revert back to the original firmware?

I think he is saying he can’t find the original firmware anywhere. Have you tried re-downloading this same new firmware and reflashing it? It might be it got corrupted in the download process.

I am unable to reinstall the original firmware due to the fact I can’t find the original factory firmware files for this printer. I have tried downloading the firmware from creality for the ender5, but it is for the newer model ender5 and not the original first release model and the firmware has too much other code which has to be edited out. This is why I am looking for the factory copy of the ender5 first factory release firmware. And boy is it hard to find

Your right, I don’t have a copy of the sd card files or the tf card so I may reload the files that came with the printer. Over the years and advancing age I misplaced them. I need to find the correct files for the factory fresh reinstall for the old first to market ender 5 model. I have spent the better part of the last 6 days going through the creality web site and the internet and pouring through line after line of code in in visual studio an have made no head way yet. Thanks to everyone for all of your help, it gives some hope…

We’ve all done that - it’s annoying.

I just did a bit of a search and I think your best option is: 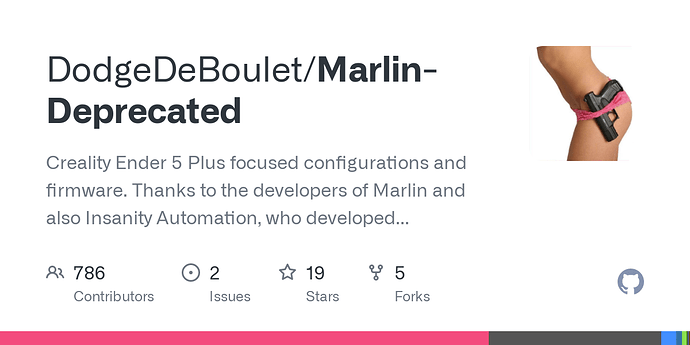 Creality Ender 5 Plus focused configurations and firmware. Thanks to the developers of Marlin and also Insanity Automation, who developed the screen code and its Marlin interface. - GitHub - DodgeD...

Lots of different precompiled versions of the firmware - pick the one that best matches your machine and try it:

Creality Ender 5 Plus focused configurations and firmware. Thanks to the developers of Marlin and also Insanity Automation, who developed the screen code and its Marlin interface. - Marlin-Deprecat...

Good luck and let us know how you make out.

What Board is in it? that is the best place to start! Also any level sensors or other mods you’ve done to it!