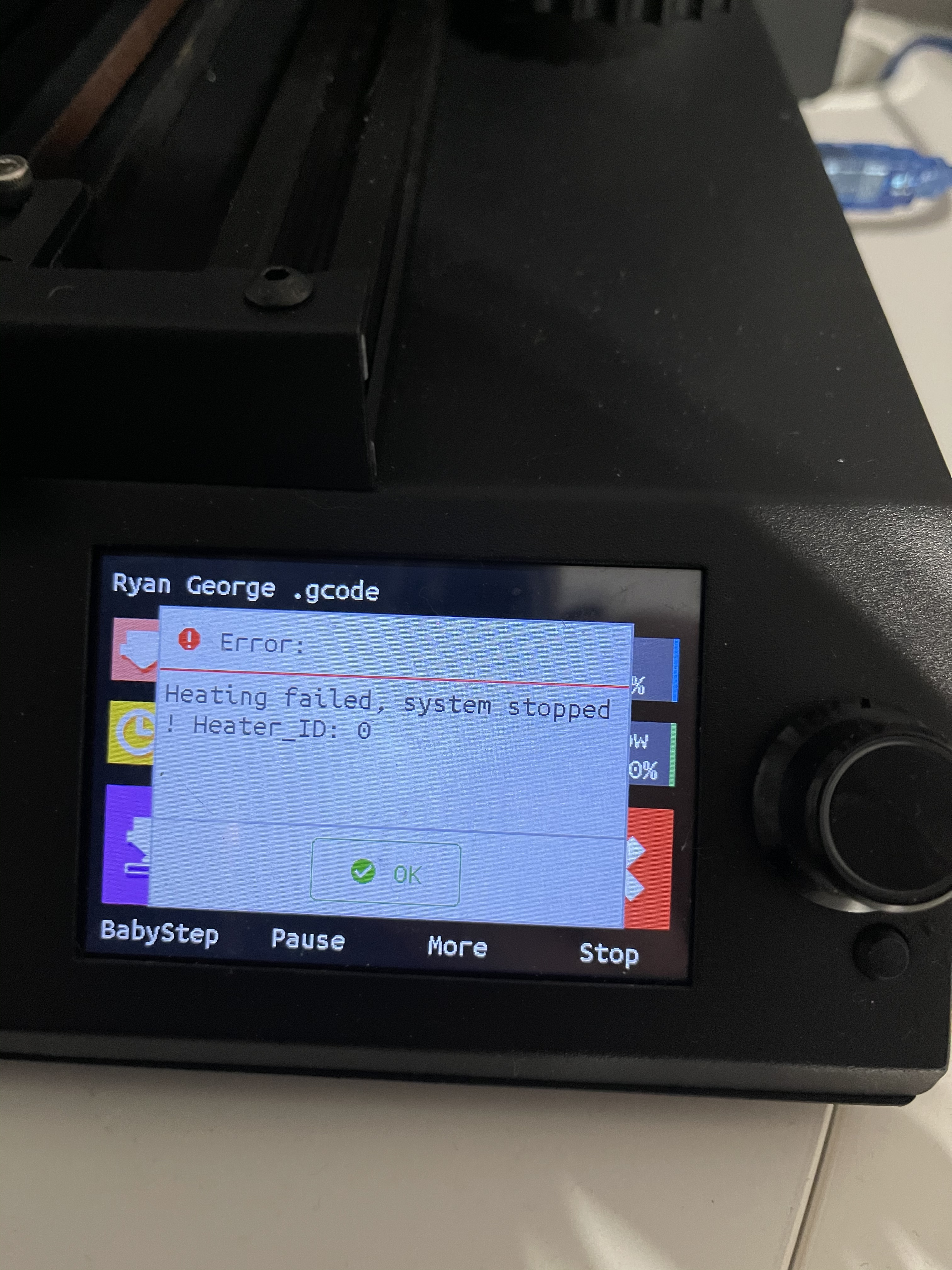 Any suggestions on how to fix this? I’m sorry I’m new to all this.

is the printer new? Was it printing ok before?
And Welcome heh

First off; It’s always helpful to tell us what printer you have and what modifications (if any) you may have made to it.

Without more specifics, my suggestions will be a bit generic.

All 3D printers will have at least one heater for the “hot end” (nozzle) although multiple nozzles (and heaters) are a possibility. Most printers will also have heated beds. Some especially large beds may have multiple heaters, so which one is Heater_ID: 0?

The error indicates one of two things: either the heater being referred to didn’t heat up or the thermistor that reads the temperature of that heater didn’t report a change in value.

So, first off, take a good close look at your wiring for both the heaters and the thermistors. Are the connectors all plugged in solidly? Are the wires going into the hot end broken? How about under the bed? On my printer (Ender 5Pro) the wires to the underside of the bed are only held on by solder. The flaw in that design is that the wires can flex and after a while the solder joint will fail or the wire itself will break. The fix for that was easy: print a cable clamp. I don’t know what printer you have so it’s possible it has a similar design flaw.

If you have an ohm meter (multimeter), unplug the heater and thermistor cables from the controller and measure the resistance across the terminals. The values you should get would depend on the model of printer, but generally, thermistors, at room temperature, should measure between 10,000ohms or 100,000 ohms. There are exceptions, but definitely not infinity or zero. When you measure the heater resistance it should be around 10 to 20 ohms, but again, definitely not infinity or zero.

If any of these values are out of spec, you will need to change that component (heater or thermistor) with the same model part. This is especially true of the thermistor which come in a variety of values, and temperature coefficients. It’s important to note that just because 2 thermistors are rated as 10Kohm, does NOT mean they are the same. If you put the wrong thermistor in, you may get wildly different temperature readings. This can be fixed in firmware, but then you will have to manually fix every firmware update you ever do since they will all assume you are using the original hardware. Save yourself some long term headaches and replace with identical components.

There is one other possibility: If either the heater element or the thermistor falls out of it’s respective mounting hole/slot/whatever, the resistance of said device will read as normal, because it’s still electrically connected, but since they are not in contact with each other via the heater block or bed under-surface, the value of one will not reflect the temperature of the other. It’s rare, but screws have been known to come loose, allowing a thermistor or heater element to fall out, still electrically attached.

Was printing fine, with no isssues

This is a BIQU B1 with no modifications

yes this is going to be a failure of the heater, thermistor or wiring. On mine the wiring inside the hotend was a little sketchy and the thermistor wires melted on the heat block a bit so what Lego says to check is all the right thing to do.

That code indicates its the nozzle thats giving you an error. the B! has short pig tails that connect to a small breakout board inside the head. The rest of the connections are through the USB-C cable. If I were to guess at points of failure it would be in the printhead first.

UPDATE **
Topic has been resolved!! Thank you all!

Issue with the thermistor!