I think the root of my issues might be the extruder stepper is overheating.

Any advise on turning the voltage down to reduce the heat?

maybe you can put a fan on it? for most of these little steppers there are heat sinks you can get

I have been designing a mount already! Lol. I removed the housing as well. I am considering fiddling with the power but am hesitant. 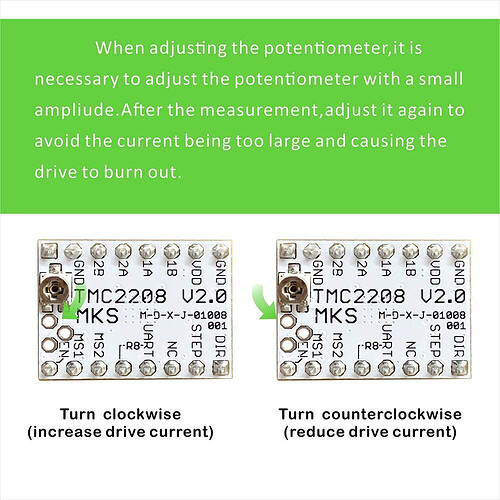 This screen shot comes from an Amazon ad. The drivers on my laser engraver (home made) were a different model but also had the adjustment. Before I adjusted them the steppers ran very noisy and too to touch. It got to a point where the drivers themselves would go into thermal shutdown to protect themselves meaning that one axis or the other would just stop working for a while until it cooled. Once I discovered what the potentiometer was for, I had them running cool and (relatively) quiet.

That’s the good news. The bad news is that many 3D printer motherboards either don’t have separate drivers that would have the potentiometer on them, or, if the driver is incorporated into the board, they didn’t include a potentiometer with which to make adjustments.

There’s also an outside chance your stepper motor has a partial internal short. It’s not likely, but easy to test: most 3D printers will use more than one identical single-shaft stepper motor. You can just swap them. If you swap the extruder stepper for the X-Axis stepper, for example, and the extruder (former X-Axis motor) still heats up, you have a problem on the controller board. If they X-Axis motor heats up (former extruder motor) then the motor has a problem.

Lego my first inclination was to swap one. The Extruder is a thin model but I think I could fit one just to see, It gets hot enough to be uncomfortable to touch it. It just seems to be an issue. I am going to poke at it over the weekend and see if I can do anything.

Thanks for the advise!

I put a heatsink on the extruder motor and it seems to help. They are fairly cheap and easy to install.