Hi
The direct drive is hooked up to my ender 3v2.
The extrusion looks like this.
This is what I’ve done so far…
Levelled the bed
Set esteps to 140
Cleaned the hot end. But I may have done it wrong. If there’s a link to do this, I’d appreciate it.

Thoughts on a fix? 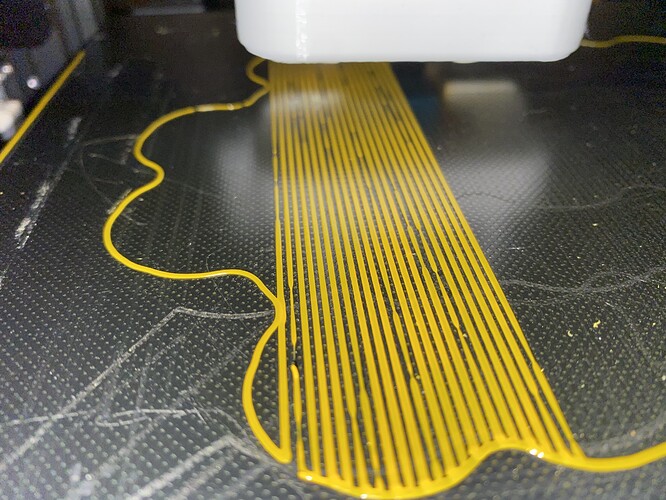 I’m not the most experienced person around here, so it might be better for someone with more experience to jump in here.

However, let my try to think this through:

I see two possibilities depending on the direction of travel:

I suppose there’s a third possibility: that the filament has a an inconsistent diameter. I’ve heard of some filament having poor quality control with respect to diameter resulting in wildly different feed extrusion rates, but the fact that there appears to be a pattern to it suggests that isn’t the case.

I note that the problem doesn’t appear completely random. For each incidence, the distance from the point where the filament first tapers to the point where it is widest again seems to be roughly the same. The occurrences are random, but the behaviour within each occurrence seems consistent. If the clog theory were true, I would expect the behaviour during a “clog” to be variable as I would expect the clogging particle to not only appear randomly, but be of random sizes and hence produce random recoveries. It’s the consistency that has me puzzled.

Is this consistent in both the X and Y directions?

I can’t tell from the photo, but is the height consistent? I’ve been assuming the extrusion rate is being affected, but as I think about it, if the height of the bed was changing (let’s say, due to dirt on the rollers), then the extrusion rate would remain constant, but the line width would be thinner and taller vs. shorter and fatter. Still. dirt wouldn’t produce a tapered pattern and the taper wouldn’t be of such consistent lengths.

So, here’s what I think I can eliminate:

I suppose I should have thought of this at the start: is the direct drive new? If so, I take it you didn’t have this problem when it was a Bowden setup? Have you used this filament with the Bowden setup? If ‘yes’ to all of the above, it eliminates inconsistent filament thickness, and contamination of the wheels and track.

Is the direct drive’s gear tightly attached to the shaft? I’m thinking that a gear slipping on a shaft could cause random changes in hot end chamber pressure which would then fairly consistently ramp-up to normal again.

I hadn’t considered the above initially because stepper motors generally have D-shaped shafts that allow gears to be connected tightly, but I just had a look at my extruder, and the extruder gear (the part that engages the filament) actually has a round hole in it, not a D-shaped hole as I would have expected. Therefor it would be vulnerable to slippage which I would imagine would give results similar to what your photo shows.

At the moment, that’s my most plausible theory.

I would agree with your thought process.

From what I am seeing its looks to be like a extruder slipping. If you look at the drive gears for the microswiss do you see any filament dust on them like its grinding at the filament?

have you tried to increase or decrease the tension on the lever arm?
have you checked that your filament path is able to pass filament with little to no friction?
have you tried the print with a different roll of filament?

Just a couple of things to try, I will keep an eye on the thread and post more as test are complete.

Thank you both for responding.
Yes, the extruder had some filament build up on it and it works like a charm now that I cleaned it up.

Awsome, glad its working well now, Anytime you need us we are here.

Sorry I missed to welcome you to the forum, Hope to see you more.