Filament dryer yes or no

I print with petg and PLA but now mainly PLA I print in my basement where it’s dry air and I have a air dehumidifier for the basement it’s a completed basement so not much moisture. I haven’t had any print issues nor print quality issues that I know of and I’ve been slowly printing a spool of PLA for the last 4 ish months I know that filaments can absorb moisture which could cause issues. Should I consider a filiment dryer or something like that?
I have been I’m doing 3D printing for the last year and 4 months and I have no print quality issues but I am also new so I don’t know if petg is supposed to look a certain way after printing and what is because of moisture. Any thoughts?

I have my printers in a basement that’s probably identical to yours (including the dehumidifier).

With PLA, I generally see problems in 4 to 8 months, depending on the brand and season with the filament getting brittle and print quality going down. I can avoid it by rigorously removing the filament and placing it in a bag with desiccant immediately after use.

I literally got a Sunlu S2 from 3D Printing Canada yesterday, so the first spool I am trying out (which my daughter has left out for the past year) is incredibly brittle - give me a few days and I’ll let you know how it goes.

Is that the one that’s currently on sale on 3Dprintingcanada?

Get one with a built in fan. I have a Sunlu unit and i found it too slow. I got another off Amazon with a fan, works spectacularly well but the power supply for it sucks and I replaced it right away. It was a few more bucks but now I have a drying system that works exceedingly well.

Night and day difference in printing.

I’ll pull the spool tomorrow and report what it looks like.

I think it is debatable. I almost never have issues with PLA I keep in sealed in a zip loc bag with silica gel. I never have had moisture issues with it. PETg however really likes a dryer. Nylons it is a necessity.

The thing with humidity is we measure the humidity relative to temperature. RH scale. My basement is cool all the time basically a constant the humidity is also basically constant 50%. sounds like a lot but the temperature is stable around 14ºC this means the air is holding 6 gm/m3 of water. not a lot.

It really is dependent on what your space sits at. mine is not very humid so I don’t really need to worry.

I guess thats a person choice.

I personally dont wish to wait 5 or 6 days to dry out one roll when i can do it in 2.

Thanks I will be waiting.

I met this dude who kept his printers and spools captive in a closet with a rack of internetz servers.
Nosebleed humidity.
Would a normal human’s furnace room work?

Well, the first test didn’t go all that well.

After 3 days in the dryer at 70C the old PLA spool was put on a printer and I started printing Benchy; I got about 4mm into the print when the filament snapped. The label on the spool says it’s from “3D Filaments” - I have no idea where I bought it from.

It seems like the first layer or two of the wrapped filament was dried but it didn’t extend to the interior layers of filament - it’s back in the dryer and I’ll try it again in a few days.

I had another spool of filament (MG Chemical) that was out for a few months that had become quite brittle. I put it into the dryer for a day and then started another Benchy print with it - it’s actually printing quite well and Benchy is just about done.

I’ll report when it’s done with any other comments but it seems like if you have a spool with multiple wrappings of filament you’re going to need to put it into the dryer for a good long time.

I’m guessing the best procedure would be to keep the filament in a dry box, pulling it out for use, then running it through the dryer and then putting it back into the dry box for its next use.

The second test (using an old roll of MG Chemicals PLA that was incredibly brittle before going into the dryer for a day) came out spectacularly well: 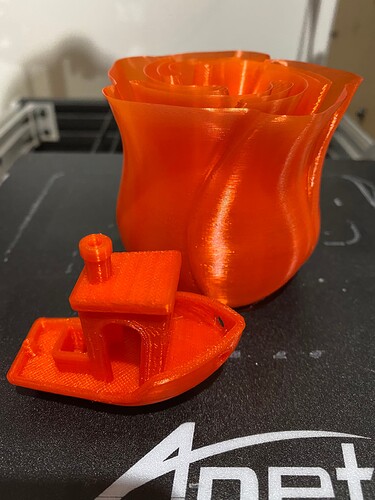 I was able to do a good Benchy and the rose .gcode shown by @bd43 came out really nicely with no filament breaks and it’s much more flexible (without breaking) than it was before going into the dryer.

The funny thing is, I would have thought the blue (“3D Filaments”) filament should have worked better, while brittle, it wasn’t as brittle as the red (“MG Chemicals”) filament and it was at least a year newer than the red. The blue was also in the dryer a lot longer than the red. Yet, after printing about 4mm of Benchy, the filament that’s coming out is very brittle and broke easily when I tried to put it back into the extruder stepper.

As I said previously, the inner layers of the blue filament turned out to be as brittle as the outer layers were and the red, which has around the same number of layers, seems to be like a new spool of PLA.

Anybody have any ideas what I’m seeing here?

I’ll try with the blue again after a few days in the dryer at 70C.

I dry all my filaments PLA PETG ABS without fail
Prior to starting drying filament i had run itno so many issues with filament…now the issures are virtually gone.