Filament stopped feeding an hour or 2 into print

This is an odd problem I saw someone else have here recently. I was printing with PETG carbon fiber filament (but it happens with PLA now too) The print looks great and all seems fine until I get the skipping extruder and find it not printing. I reloaded the filament and started again and the same thing happened. So I printed 2 of those X, Y, Z test cubes without any problem. I blamed the filament and switched to PLA, but the same thing happened with the PLA but I had more time and could sit nearby and could hear it stop right away. The filament was very stuck I couldn’t push it through. I pull it back out (while still printing by the way) and I pushed it back in and it was able to start printing again. it did this 6 or 7 times in a 5-hour print. I pulled the nozzle off and cleaned it. It seems clean inside the hot end and I can push filament through it by hand like normal, I ran out of time but I still have to check the extruder gear and I want to check the temperature I have a feeling it’s too hot which would be a surprise as it’s been 25° colder than it’s supposed to be since I got it.

It might help to tell us which printer this is for. Is the extruder itself plastic or metal? I’ve seen cases where the plastic ones develop a hairline crack that kills their ability to put pressure on the filament. That stops the filament from moving.

While a heat break does do it’s job, one thing many people don’t consider is that a significant amount of heat is removed from the hot end by the filament itself as it extrudes. Once the filament stops moving, that heat is no longer being drawn away and causes filament to melt high and higher up the heat break causing the filament near the top of the melt to bulge and making it hard to pull out.

Symptomatically, it matches your description.

Of course, if it’s a metal extruder, I’m more at a loss.

The extruder is all metal. And the hotend is also all metal. Its a biqu b1, the one weird thing about this printer is the retraction is 7mm 7mm/sec which is a lot compared to others and I read that too.much retraction can cause it too

I’m not too familiar with all metal hotends, but it kind of sounds like heat creep to me.

From what I’ve read 7mm of retraction seems like quite a bit for a all metal hotend. I would first try lowering the retraction distance and maybe changing speed and see if it still jams up.

I found a decent link on the retraction on all metal hotends, it’s a planned upgrade for me once I figure out which hot end I want…

How to Prevent Jamming in All-Metal Hot Ends | All3DP

All-metal hot ends are incredibly popular and versatile, but they're often prone to jamming. Read on to keep your hot ends running smoothly.

Yes its the first thing I’m going to try actually. I need to be able to babysit it in a longer print. I have 2 parts that are 6 hours each I can do, it doesn’t matter if they are perfect either

Hey Glenn I have been fighting with the same issue, I started with a lined and then unlined.

Did you put a little heat paste on the throat into the heat block and heat sync? I found this to help heat creep.

Is it in an enclosure? How hot is the air in the enclosure? I found on my first version enclosure the ambient air to run over 65 C it was starting to deform at the drive gears.

Did you switch to Capricorn tube? It is slightly smaller tighter fitting. Less backlash in the tube but prone to jams. Super unlikely but it might not be one thing but a number aligned together.

Thanks yes, I’ve been fiddling with it today. I really need it to start printing again too. I’m trying to get this PETG with carbon fiber working, it prints very nicely but it’s clogged in the nozzle twice today. A hard clog that I pushed out with PLA after taking it all apart and cleaning everything twice. When it jams there’s a little bit of filament thats fatter and doesn’t pull back into the Bowden tube easily. I also discovered that my temperature problem where it was always colder by 25° than indicated. This made me up the temperature on the prints to compensate and I think that might be why it was happening. It might have been cooking the plastic out and leaving carbon to clog the nozzle. The thing must have heard me ordering thermistors this morning and decided to smarten up. I have a Capricorn tube coming but really, the OE tube seems to flow the filament ok. The tube I ordered is the more transparent kind that I think is a little bigger inside.

Between the heat block and the heat sink I put paste on but not on the nozzle. I’ll check the temp inside the enclosure right now … heh brb. It’s about 40c in there. but if this test cube print fails I’ll check it again then.

I did change my retraction settings down to 40m/s and 3 mm but it still clogged but like I said it might have been too hot. it could be this CF filament is more sensitive to temperature. the package says 200° to 240 and I was printing at 245 yesterday and 235 earlier which I beleive to be reading properly on the machine now

How did you discover that your temperature is 25C colder than indicated?

Your basic electronic thermal scanner (the type that just gives a number) measures an average over a large area, even though they often have laser pointers that might give the impression they’re taking temperatures at a single spot.

Then there are the thermal cameras. They have a higher resolution but are still averaging over an area. 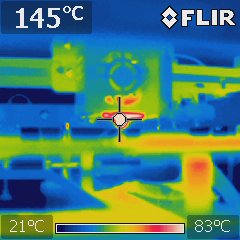 You’ll note from my FLIR i7 that the temperature measured at a distance shows 145C whereas it was actually 200C. To verify that it was 200C, I had to lower the bed so I could get the camera directly under the nozzle, then hold the nozzle close enough such that the nozzle tip took up about 10% of the width of the screen (here it’s only 4.8%. This is how I actually discovered the FLIR is taking an average of an area that is larger than the circle in the middle of the screen would suggest.

Unfortunately, I didn’t take a photo of the nozzle up-close where the temperature was being read accurately.

My experiments with the FLIR and the E5Pro showed that the readings taken by the FLIR very closely match those on the E5Pro’s display.

Oh, I have all kinds of temperature reading devices one sets even been calibrated but dont have a flir camera lol… would have been helpful when I was producing shrink ovens to see where the heats going…mine are all wired and I measure with the thermocouple in the heater blocks