I’m trying to wrap my head around some settings that people list when posting stl’s on thingiverse and elsewhere.
What does the “resolution” mean and what settings does that correspond to? I’m unable to find anything specifically called that in my slicer (Cura), and I’m wondering if that’s possibly impacting some of my prints.

Resolution is referring to the layer height in cura. Anything around 0.06 is fine or extra fine, 0.15-0.2 is normal and beyond this is fast course draft what it gets called is not important and different saved profiles will use differs terms for similar settings.

It specifically refers to the height of the plastic layer

It usually refers to the layer height.

Thank you, that really helps!

You asked about resolution with respect to STereo Lithography (STL) files. While the answers given above by others refers to layer heights and, hence, the quality of the final print, resolution as it applies to an STL has a different meaning.

Computer, of course, only deal in digits. For a computer to do anything with a 3D model (create it, view it, print it), you must somehow convert the object you want into digits.

Any three dimensional object can be represented by a series of dots that outline the object. The more dots you have, the closer the cloud of dots will resemble the real-world object. 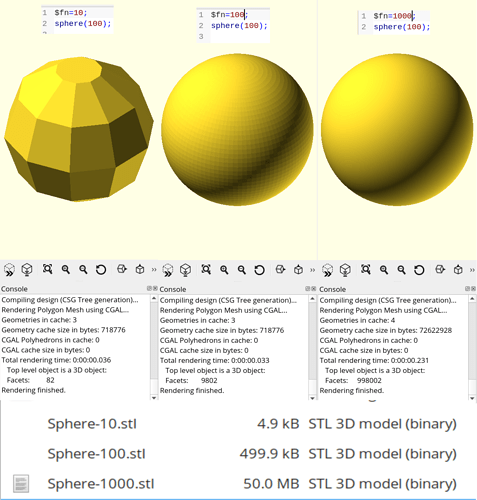 Above, you see three screen shots from OpenSCAD. They are three “identical” spheres, radius 100.
Above each sphere you see the code which generated it. The second line of code “sphere(100);” should be fairly self-evident.
The first line in each case is $fn10, $fn100 and $fn1000 and represents the number of facets that a curved surface will be divided up into.
In the first case, each facet covers 36 degrees. In the second 3.6 degrees and in the third 0.36 degrees.

Note the text below each sphere. The second-last line is the number of facets each sphere produces: 82, 9802 and 998002. As you can see, the more facets you have, the closer the object comes to looking like an actual sphere.

That is what is meant by STL resolution.

In the first case, the one with only 82 facets, there is no layer height, no nozzle size, no print speed and indeed, no slicer setting at all that will ever make it look more like a sphere. The STL only contains 82 facets and that’s all you will ever get no matter how perfect your printer is.

So why do you care about STL resolution? The first answer is obvious - low-res (also known as low-polygon count or just low-poly) can look terrible. The second answer comes in file size. Note the directory listing I included at the bottom. The 1000 facet sphere takes nearly 50MB of storage for what is really only one object. Often a mid-level resolution is good enough. There isn’t much point in printing an STL with facet sizes smaller than your printer can produce.

The other problem is working with them. Earlier this week I modeled a brick chimney for someone as a demo. It was 1000 bricks high and 21 bricks around at the base and done in high resolution. I should have known better. It took 58 minutes to render.

You need to keep in mind that some people who develop these models on Thingiverse may have small printers. If you have a large printer and decide to take their model and scale it up, facets that are basically invisible on their printer may be quite noticeable on yours.