The wife and I are fairly new to printing but have been fairly lucky with most projects; any issues have been rookie learning curves.
I’m not sure what has happened to this print though, and I’m hoping someone can offer some advice; I’m hoping these are…gnome issues, and easy to fix. 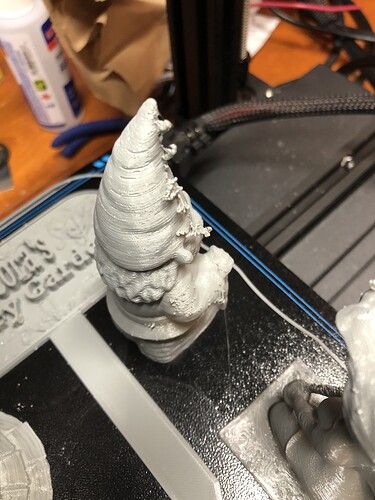 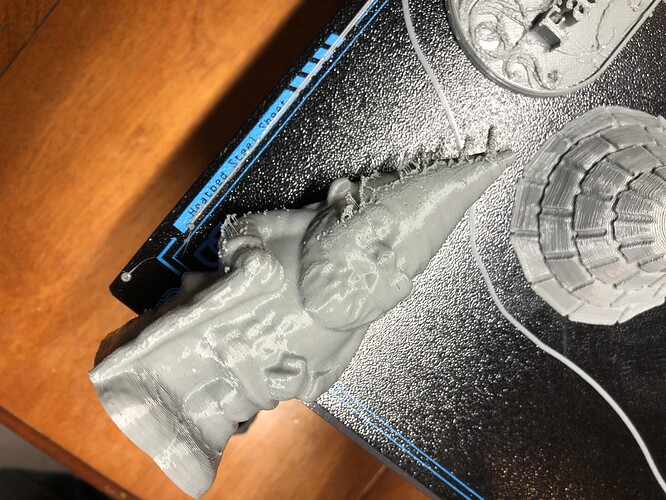 I was initially going to suggest using Unity, LXDE or even KDE. I’m a Pantheon user myself.

Try reducing the nozzle heat in 5C increments (decrements?)
Another thing that might help is increasing the retraction distance.

This is caused by filament oozing out of the nozzle when it shouldn’t be. The print head finishes a layer at some more-or-less random point then moves away from the model and around to the start point for the next layer. While it’s moving, filament is oozing out either because it’s too hot and therefor runny or because the filament hasn’t been retracted enough before the movement to suck it back into the nozzle and you’re left with a bit dribbling out. Then, when the next layer starts that dribble gets attached to the side of the model.

I will give that a try.
Would the retraction settings need to change depending on filament manufacturers?
We’ve been using PLA, different manufacturers, colours, etc, without issue; we have changed the heat to suit the filament but nothing else. I’ve even used the same grey roll without issue.

Yes. Some filament formulas are more stringy than others. Also, some melt at lower temperatures than others and hence, if you use it at the higher temperature that might be appropriate for a different filament, it might be too runny.

Also, I recently found a roll of PLA-F that was stringing like crazy. It turns out I had to run it at a 30C lower than the manufacturer’s label indicated. You can’t always trust the labels, although, to be fair, that’s the only one I’ve had that was that far off .