I keep having issues with filament jamming in my bowden tube on long prints, this leads to the extruder sawing away at the filament.

I think I need to consider a swiss hotend. Any other thoughts?

I run into this issue a lot with my Ender 3 as well. Some filaments are worse for it than others.

What type of bowden tube are you using? I found this useful advice in another thread, re: Capricorn bowden tubing:

I wouldn’t recommend XS tubing, I only use the TL. If your filament gets a little out of spec it will jam in the XS tubing because of the super tight tolerance.

Capricorn XS is what I currently have on my machine, which probably doesn’t help my issues. Here’s the TL tubing 3DPC carries that must have just come back in stock:

Capricorn Premium PTFE Bowden Tubing TL Series for (1.75mm) The Capricorn Bowden TL series tubing is a premium tubing made from pure Japanese Polytetrafluoroethylene (PTFE) resins. This tubing defines consistency and you can take advantage of its...

I am using the spec tube that came with the ender 5. Honestly I was already thinking of a direct drive hot end, so im thinking it may be in order sooner then later

You and me both haha, I ordered my direct drive plate upgrade kit yesterday!

My artillery is doing the same, it is direct drive, I am thinking a better drive, perhaps a wind.

I’m at a loss in my case. It could be something overheating.

At which end of the Bowden tube is it jaming? If it’s at the hot end, it might be that you have retraction set too high such that, when combined with heat creep on long prints, the filament is still molten when it gets pulled back into the tube and solidifies there. I had to deal with that 2 weeks ago.

The filament was still in the nozzle, an it was difficult to remove the jammed filament from the tube, it was deformed in multiple spots through out the tube from the extruder teeth.
I know it’s not the extruder tension, as I backed that out as far as possible prior to this and it doesn’t deform on shorter prints (it used to however, the tension was super high out of the box) this time it happened around hr 4 of an 8 hr print.

Have you tried calibrating your e-steps on it?

Yes sir, and I was a little out but nothing terrible, however I did my math twice and corrected the over extrusion, and that fixed it for short prints, now its only the longer prints, where everything seems to get a little warmer

It’s normal for a stepper motor to heat up when in use, even if they aren’t even moving, so for reference sake I checked mine… 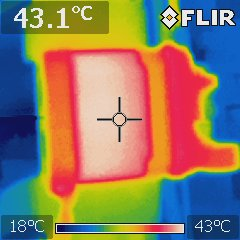 This is the side of my extruder motor, currently 4 hours (and 1mm) into a print.
The yellow/green bar behind it is the frame of the printer, acting as a heat-sink, so the side I’ve taken the picture from is as hot as it gets on the outside. Note that it’s hot, but still touchable.

Of more interest to you would be the extruder gears. If they get so hot that they approach the filament’s glass transition temperature (60C for PLA), then the extruder could conceivably be softening the filament and deforming it. That would explain why it’s not doing that when cold, on the other hand, it shouldn’t take 4 hours for the motor to reach these temperatures. I haven’t checked to see how long it actually takes, and I’m in the middle (start, actually) of a 27hr print, so I can’t test it right now.

Anyway, here’s an image of the business end. Given that the extruder gears stick out from the motor quite a bit and that the filament passing between them draws heat away, one would expect them to be quite a bit cooler. 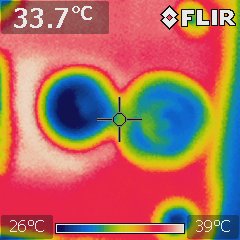 I’m taking a measurement of the filament itself. The darker circle is the motor shaft. It appears considerably darker because it sticks way out where the extruder knob would mount, so you’re really looking at it at its farthest end, not where it contacts the filament. As you can see, however, the filament passing through my extruder isn’t anywhere near its transition temperature. Seeing this, I would expect your stepper motor to have to get burning hot (to the touch) before the filament is affected by it.
Two things I can think of that might up the ante: a slow filament feed rate will expose it for longer than mine is being exposed and if you have an extruder knob attached, it will both insulate the extruder gear so the part that sticks out can’t draw the heat away from the filament and it also restricts natural convective air flow over the extruder gears that would help them to run cooler.

All of this is, of course, assuming this is even the cause of your problem.

That maybe the most info packed post I’ve read in awhile. Lol

The motor is not burning hot ie it doesn’t burn skin, and I don’t have a knob on it.

Here’s my issue though, when I disconnect the bowden tube from the hot end, there is no bulge or major deformation of the filament, but trying to remove the filament from the bowden tube requires a fair amount of force as it is deformed inside the tube, with lots of extruder teeth marks.

Once again I turned the spring screw all the way out, to loosen the extruder tension prior, and then on advice of a post on another forum I loosened the lever pivot, and now I actually have very little tension on my extruder, compared to as it came from the factory. And yet I still have deformation in the filament, enough that it seems to jam in the tube.

I’m wondering if maybe my retraction is a little too violent? The spool does jerk pretty good at times.

On mine the filament goes through the tube like its slipping on ice. Very little resistance. My bowden tube is maybe 10" long though, I see some printers with way more tube to go through.

I wonder if it’s possible you just have a defective (out of spec) Bowden tube?
Of course, it only takes one deformation of the filament to start a jam. All the other deformations can be caused by the force needed to overcome the resistance caused by the first deformation.

Well hence I’m thinking of eliminating the bowden tube all together, use a direct drive end, fed from loading spools

I have been having what looks like the exact same problem. The last 3 multiple hour jobs ended up the same way. Once I pulled out the filament in the tube, I pushed a new filament up to the nozzle which I kept at 200C and with a little extra push, a little blob of filament came out and then I could easily extrude some more. I do not know why it started doing this in the last few days. This is a new Ender 3 Max and I only printed about half a 1kg reel of white filament so far. I will explore the retraction settings.

Well, since I started having this problem last week, I remembered that I had activated the Z-hop feature in Cura. Because retraction settings could be causing this problem, I figured that maybe Z-hop is making it worse so I disabled it this morning and printed a 5h9m job (same as the one that failed yesterday) and this time it printer 100% with no apparent problems. It is too early to celebrate but it is looking good. 2 more copies of this print to do over the weekend. Fingers crossed.

A thought just crossed my mind on this subject…

Do you do a lot of printing of abrasive materials? You know how abrasive materials can wear out a brass nozzle? I’m realising it would probably be doing the same thing to the knurled portion of the extruder wheels that grip the filament. Is it possible they’re going essentially bald and therefor not gripping properly anymore and hence slipping more easily?

No I only print pla, at the moment anyways.
And the knurled area was fine when I stripped it.

I found out that the dark blue bowden tube creality ships with the ender 5 is just a little tighter then the light blue stuff, and is prone to jamming even slightly deformed filament.
I was in the store yesterday and bought the microswiss direct drive, some new bowden tube to go prior, and a bltouch. The drive and bowden change should solve this issue, the repaired wire solves my other issue,
Now on to the next issue lol