Please let me know if anyone in the lower mainland (Canada, BC, Vancouver, Surrey, and surrounding areas) is available to help me with a simple y axis belt replacement (which I have). It should be straightforward but I am not a handyman and assembling the printer itself was a big task on its own. It was printing wonderfully for a few months but broke down 5 months ago and now I’m lost.

I’ll pay you whatever you feel is fair.

Did the belt break? I ask this because I’ve seen many cases people go to extreme measures (replacing parts) when only an adjustment is needed.

I don’t mind coming over to help you, if you’ll pay for my airfare from Toronto

Seriously, though, I could just make a video* of how to change the belt using my own printer.

Can you send me your details
And you can lead me through fixing it? 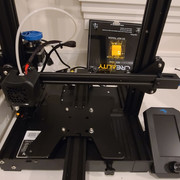 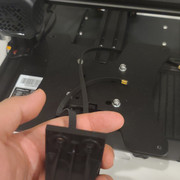 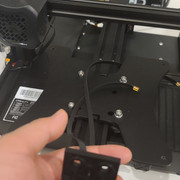 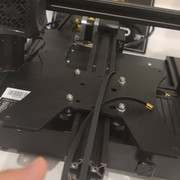 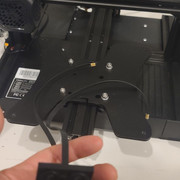 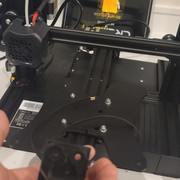 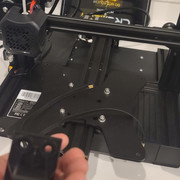 Now, as it is, I got my axes confused. Changing the X axis belt would have been something I could make a video of and would have been directly relevant to you, but the Y axis takes a different route on my printer.

It’s 4AM, so I’m not going to try to make a video until I tomorrow afternoon, but I’ll describe the proceedure to you in case that’s clear enough for you in the mean time.

I see your belt is intact and has the brass fittings at both ends, so that’s a good start.

I also assume you have the screws with which to mount the belt tensioner, which I presume is the thing you have in your hand. This is where your model differs from mine. Mine doesn’t have a belt tensioner so any video I produce wouldn’t show it or how to adjust it. Also, you didn’t show the back of the belt tensioner and since I don’t have my own for reference I’m going to have to take an educated guess as to what it looks like on the back side.

So, I just watched a video on assembling the E3V2 so I could see what the belt ensioner looked like and, incredibly, it covered everything EXCEPT the Y Axis belt installation. But at least I can now describe it better.

For reference, I’ll treat the printer as being oriented as you have it in the photos.

1: Move the bed all the way forward

2: Lay the belt out so that it runs from the back of the bed, is lined up away from you, and has the teeth facing down.

3: If you look at the third photo you sent (20210115-032118 — ImgBB), you can see the two brass clips on the belt. One of the clips is hanging off to the side. Ignore that. Focus on the one that’s sitting on the bed almost dead center of the Y axis. That brass clip happens to be sitting almost exactly on the slot the belt needs to go into. The belt that you laid out, teeth down, should have the brass clip closest to you brought up through that slot from below. That brass clip is what prevents the belt from sliding down and out of the slot. Position it so that the brass clip is resting on the plate with the belt running through that slot. It may help at this stage to put a piece of tape over it to prevent it from sliding out of the slot as we proceed.

4: With the brass clip now taped to the slot at the back of the bed, slide your fingers along the belt to make sure there are no kinks, twists or loops. It should basically run right up the center of the Y axis rail to the covered housing at the rear. If you can remove the cover easily, go for it. If not, feed the belt into the opening and around the toothed pulley inside. Again, the belt should have the teeth facing down going into the opening. If you can see or feel the toothed pulley, you’ll notice it has raised edges on either side of the teeth. The belt goes between the raised edges and rests on the teeth, loops around the pulley and starts heading back to the front of the printer. When underneath the printer, the teeth on the belt are facing up. Pay attention to that so you don’t get any twists.

5: Now, at this point, I don’t have an E3V2, so I don’t know what it looks like underneath. All I can tell you is that the belt should run against the underside of the Y Axis beam. Nothing else should ever come between the belt and the beam. You may have to feed the belt through slots or holes if need be. As I say, I’ve never seen it and can’t describe it properly. All that matters is that the belt ends up back at the front with it’s teeth facing up.

6: Gently pull the belt toward you, allowing the bed to roll backward. It should not bind. If it does, look closely underneath to be sure you haven’t caught it on a cable or other structural element.

7: Assuming step 6 went smoothly, we’ll focus on the belt tensioner which has it’s own toothed pulley. Rotate the knob on the belt tensioner counter-clockwise. As you do, the the toothed pulley inside it moves away from the knob. Do this until the pulley is as far away from the knob as it can go without falling off. If you can, loop the belt up from the bottom of the pulley over the top and back toward the bed. If you are successfully able to do that, great. I would then fasten the belt to the top of the Y Axis beam, or even the bed if it will reach, with a piece of tape to prevent it from coming loose while you re-attach the tensioner to the frame.

8: If you are not able to just thread the belt over the pulley, the first thing I would then do would be to loop the belt up and back toward the back of the printer and tape the brass end to the Y Axis beam to hold the belt in place while you disassemble part of the belt tensioner. There is a bolt in the side that holds the belt tensioner pulley in place. You could take that out and remove the pulley, loop the belt over the pulley and put the pulley back, then re-insert the bolt. I would imagine that could get a bit awkward.

9: No matter how you get the belt around the tensioner pulley, double (triple, quadruple, what are we up to?) check that the belt is not twisted, kinked or looped. Bolt the belt tensioner assembly back on to the end of they Y Axis beam.

10: Hopefully all is well up to this point. Remember the slot you put the start of the belt into in step 3:? There’s a corresponding slot on the same plate toward the front. Keeping the teeth of the belt facing down, come up from below and slide the belt into that slot. The brass clip should now be resting on top of the slot. Tape it in place.

11: Rotate the tensioner knob clockwise to take up the slack on the belt. The belt should be quite tight. You don’t have to go super crazy with it. You just don’t want the belt to slip as it goes over the pulleys. At this point, you can remove all the tape, and you should be done.

It’s now 5:09AM and I can’t think anymore, so let me know how you fared and I’ll check back in the afternoon.

That doesn’t look broken to me… looks like it came out of its locking groves.

See the metal clips on the ends. Just have to reset the belt.

I’m sorry I did not read this properly until now. I thank you so much for your detailed response and I will digest it properly this weekend and hope that I can get my printer back up and running. (You don’t happen to live in Vancouver area by any chance do you?)