New Lesson for Me, Filament Runout

So, doing probably the biggest print I’ve done, 22 hours and I’m at 63%, I just noticed I’m on the last roll on the spool! is there a way to stop the print, change the roll and restart?

I may look into the filament runout sensor now

I dont have an ender 3 (i have a clone) though you should have an option to pause the print.

Im not sure of your menu options specifically, but it should be there.

The way i used it was for such things like this, where i wanted to change spools and didnt have a pause at layer option set up. So long as the material is simmilar you can mix different colours, or even filament types, though i wouldnt nessisarily suggest that on such a big print.

I would select the pause button, the printer would lift the z when it felt was a good time to move away from the print. At that time i would do a manual filament change so holding the extruder arm bracket thing, and pull the filament out. BE CAREFUL TO NOT PUSH DOWN MUCH ON THE Z AXIS OR YOU MAY MESS UP YOUR PRINT. The hotend should stay hot, but may cool down if no user inputs are made in a set time. This is normal, but for a filamemt change i would try and be prepared and on the ball for the process to avoid hiccups.

Once filament is loaded i would do a manual purge, so keep pushing till filament comes out. If its a colour change then id keep going till the colour came out as expected. Once done i could remove my string, you may want to wait… Idk maybe 30 seconds if the heat holds, to try and nab any more strings that come out due to back pressure. Then select resume, and id watch that layer to ensure it gets going again happily.

If the nozzle cools down, clicking resume will warm it up again prior to printing, but it might be a bit more sketchy doing the purge if you didnt already.

NOTE there may also be a filament change option as a button for you. If so it “should” pause the print and start a retraction automatically. Though mine “had” that, i usually went with the manual filament change anyway.

As for the filament runout sensor. Its cheap insurance. At only a minor hassel. Even if its not set up properly, it should stop the print atleast if not help with a automatic filament change. Though i have had 1 instance where filamemt broke in a way that it was in the sensor but broke between the 4cm distance from the sensors.output to the extruder. Soo its not perfect. There is a BTT Smart Sensor which would have identified this, and its only lile $15-$20. Though i dont have this type yet.

You could even make your own filamemt sensor out of a printed case, some wire, and a spare endstop.

There are also optical runout detectors which ive been told work fine, but i like my “standard” endstop type of filament detection. Its simple, and pretty reliable.

You could do a controlled stop. However many beds when cool will release the print and repositioning it can be difficult, (impossible?) Best of luck.

Well, as you both know, it was easy, and all went well. Got a few layers of the new filament and I ended up learning another lesson, keep my tools away from the nozzle. There was a blob of filament that I had to try and knock off the nozzle, the nozzle changed direction quickly towards my screwdriver and I knock the nozzle off track.

A basic run out sensor is cheap and simple to use IF you motherboard is set up for it. The Ender 3v2 is, I don’t know about earlier Ender 3’s.

If you install the Jyers UI firmware upgrade (very easy to do) then all of this is built into the display screen, as is activating things like the run out sensor and BL/CR Touch.

I paused the print and went straight to tune and changed the setpoints for the hotend and bed back to the printing values. Changed the filament and all appeared to be okay till I physically screwed it up.

I have also had a power outage, only for a moment so the temp of the bed was OK, but it really didn’t restart great so I scraped that piece too.

I’ll have to look into the firmware and filament runout sensor, think it’ll be a good idea to have. 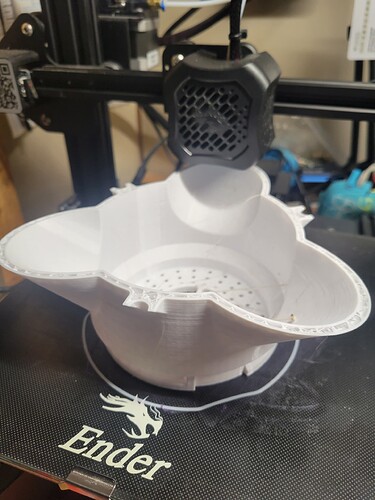 Like i said its cheap insurance. I’ll be trying BigTreeTechs Smart Sensor, and may be able to comment on it when i eventually get it. Currently 2 of my printers use end stops as their runout sensors, and i cant complain, simple is good. My prusa mini uses… i dont remember but its different. it was an extra $20 on that printer but cant complain.

What i have had issues with, and im going to figure them out soon as im recompilling firmware again. Is the marlin stuff for filament change, related to retracting and advancing. I had it work in the past with my stock firmware, but since i changed it, i kinda gave up on it. Though it works really well on my prusa mini, so im going to try again at it.

if you need help/pointers, feel free to question the forum

The filament change, when activated, stops printing and retracted the filament out of the boden tube or direct drive (but less filament) a pre-set distance set by you usually. You install new filament hit the resume button and it feeds the new roll in and then purges it so any old filament is gone. after that it should ask to continue the print and it will resume at the point it left off. A run out sensor does exactly the same thing but the change is triggered by the sensor. A very handy upgrade for a low cost.

Power failure mode frequently doesn’t work very well because the nozzle isn’t moved away from the print and the hot end fuses onto the print before cooling off. This is then a problem when you try a restart, pulling the print off of the bed. If the power failure is momentary you might have a chance.

The pause function can work OK if you don’t do it to long, It depends on whether the bed stays heated of not on your printer, some don’t or not for long. A long pause and your print pops off the bed.

Whether you have any of these function built in depends on you firmware and if your motherboard has connections for the sensors. The Ender 3V2 does but the firmware needs to be upgraded. Creality has a newer version supporting this but the Jyers UI is the best, for this and other reasons. Firmware upgrades on the Ender 3V2 are very easy.