PETG or PLA? After a bad experience with ABS

I am very new to the 3D printing universe and looking for some guidance around filaments.

I am printing medium/large toys for my kids and the end result with PLA is satisfactory but the toys break very easily. I’ve decided to try ABS (bought many filaments

), but unfortunately it is being a pain to print with ABS. It cracks, it does not stick to bed… At this point, I’ve tried everything I could… I’ve watched multiple videos on YouTube, changed Cura settings, high temperature, low, glue, brim and everything else you can imagine. lol

I will deal with ABS in the future when I get more time to experiment but for now, I wonder if PETG will be easier and more durable for the toys. I am considering exchanging the filaments I’ve bought but I would love to go with the right one. What I mean by the right one is a more durable material and easy to print.

For curiosity, this is mostly the (best) result I am getting with ABS after way worst results: 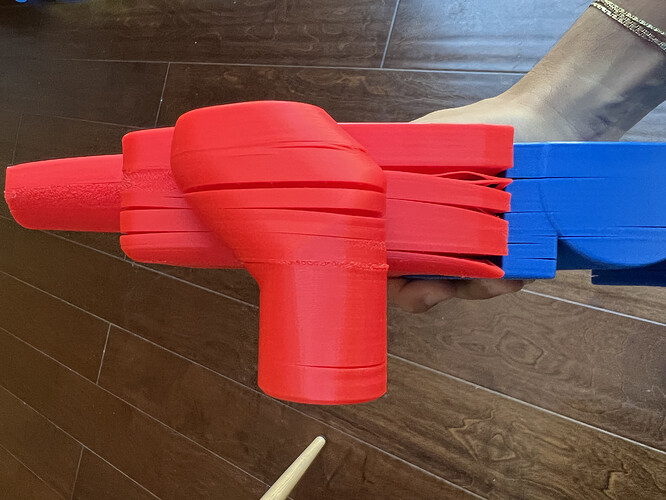 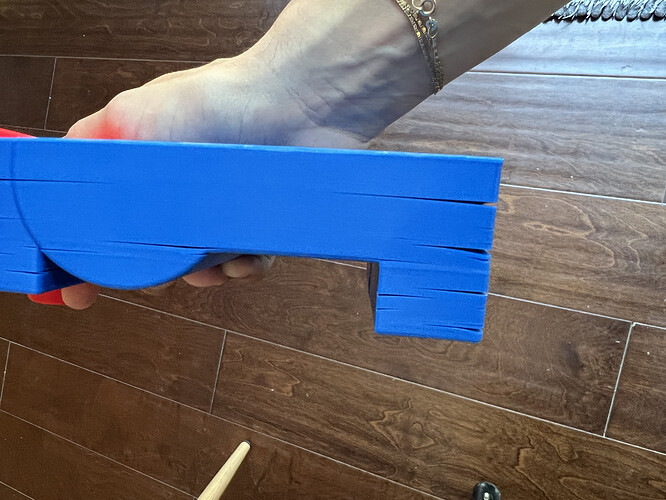 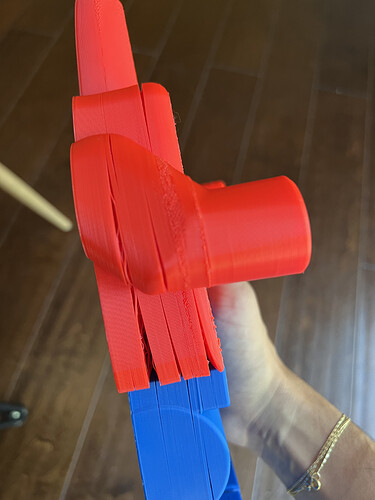 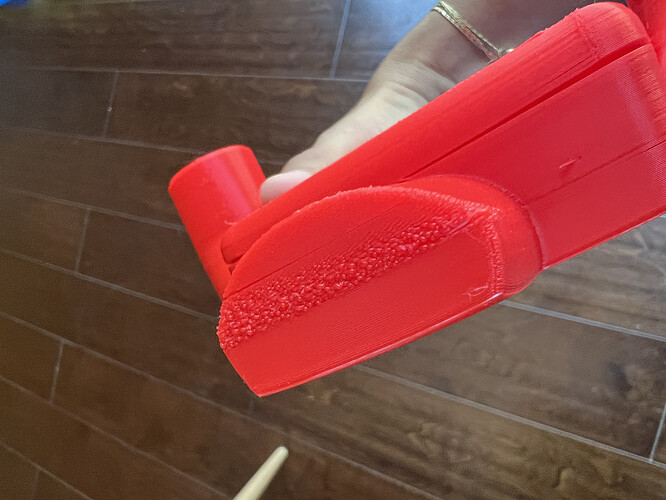 So, thought the first:

I’m guessing your printer isn’t enclosed, because that sure looks like differential cooling. ABS shinks as it cools. (Well, all plastics do, but styrenes shrink a lot.) The bottom layer of your print is as hot as the heat bed - presumably around 100 degrees - and the top layer is as hot as the nozzle - presumably around 260 - but in between the print will cool to the ambient temprature.

Without an enclosure, that ambient temperature is going to be room temperature. And, okay, depending on where you are that can be really warm - yesterday afternoon I switched on a printer and the ambient temps the nozzle/bed were showing was 31 degrees, which is awfully hot in a home! But even 31 isn’t really hot enough to keep the print from cooling.

Depending on the efficiency of the enclosure, you may or may not also need to heat it. I managed to enclose an Ender-5 and found that in summer that was enough but in winter, because the room is being vented to the outside and because the printer is right next to a concrete firewall, I needed some extra heat in the form of a heat lamp.

I can also see some major warping on the bottom; the best way I’ve found to deal with that is to leave the prints on the print bed in the enclosure and let the whole thing very slowly cool down to room temp. (Yesterday it meant letting a 3 hour print cool down for 4 hours.)

So, yeah, ABS is a pain in the butt to print. I’m using it because I’m joining parts together, and ABS can be solvent welded with less dangerous chemicals. Also, I’m then sanding the snot out of the parts and painting them so they don’t look like 3d prints, and ABS sands easier than other plastics. (Just make sure you’re wearing a mask so you’re not inhaling all the dust.) In my opinion, if you don’t need the ease of finishing and you don’t need the extra 20 degrees of temp resistance ABS has over PETG, there’s no real need to struggle through printing it.

As for PETG vs PLA, my personal experience is they’re about the same. CNC Kitchen and Tom Sandlander’s YouTube videos strongly suggest that as a single part PLA is actually stronger than PETG. I’m currently of the opinion that PETG’s main advantage is the 80 degree temperature resistance. Although, I do tend to use it for anything that will have screws driven into it.

Where are your toys failing? At joints, or are individual parts breaking? If the latter, rather than playing with exotic materials, have you tried just printing the parts stronger? The best way to make a part stronger is to increase the walls. For things that I want to be durable, I print with at least 4 walls and usually 6. With my 0.4mm nozzle, 6 walls makes the part 2.5 mm thick, which is pretty dang strong. (Increased infill helps a little, but common wisdom is that anything over 30% is a waste of plastic.

So, yeah. I’d take whichever filament you currently have on hand that isn’t ABS and try printing your part with 6 walls.

I print a fair amount of PETG and it works well, stronger than PLA.
At work I have just tried some PETG c/w Carbon Fiber, works as easy as PETG albeit a rougher finish and somewhat stronger than plain PLA.

As far as saying one is stronger then the other there are a lot of variables to consider. Compression, torsion, bending, stretching, impact, they all have different strengths and that varies with printing conditions also. It can be a freaking nightmare to sort out. PETG “generally” is not actually as strong in PLA under some conditions but is better in others like bending. It stretches instead of breaking. It has a higher glass temperature so it can take high summer temps in a car or even just outdoors. It is much easier to print than ABS but may be a bit trickier then PLA, that may vary with the brand too.

I’m sure in industry companies do a lot of testing to find the perfect filament for a particular item to print but we really can’t do that. It is a basic crap shoot for us. Trial and error and experience is the only thing we have to work with.

Thank you very much for all the responses.

I did a last try, but at this time with a different ABS brand. The result was way better… No cracks and it sticked to the bed. I will add pics later.

Do you think the material can be the main issue that I was facing? Have you had similar issues?

Different manufacturers will cool at different rates, It will also depend on the infill percentage and if the AC kicks on during the print. Generally speaking, ABS can be a bear to print but the enclosure will drop your failure rate from probably 80% to less than 40% pretty quick

Which brand and type of material is the most important thing to be aware of when you are 3D printing.

Always remember material is not just affected by your printer it is also affected by the environment both before and after it leaves the nozzle.

@vfragoso I would make some suggestions. I would stick to PLA until you have it print perfectly every time. This will teach you a lot about your printer. @Loosenut has it right one material isn’t ‘stronger’ that another just more of less appropriate. Often the design will influence the best material.

ABS can be tricky, but most importantly it produces very toxic fumes when printed. It is best used not only with an enclosure but ventilated as well. Please be cautious. Melting plastics need to be respected.

My advise is to get the printer printing well with a material that is ‘easy’ then move to something more challenging like Petg (slightly more difficult to pla) and move up slowly. There has been many who bought a printer wanted it to print something at the edge of the printers ability. Sunk a bunch of money and time to upgrade it only to have it (or the user) fail to do what they wished and given up.

Take your time and work up to it.