Been trying to print an Eiffle tower in PETG on my Mamorubot SX4. Bed adhesion is good and the base of the prints are great but once it gets to all the intricate framing it really goes bad. Tried different temps, speeds and even put the filament in the dehydrator for 24 hours. Always the same issue. Is PETG just no good for this type of print? Using flashforge PETG. Is that bad or good? I was using Flashforge PLA Pro with great results. 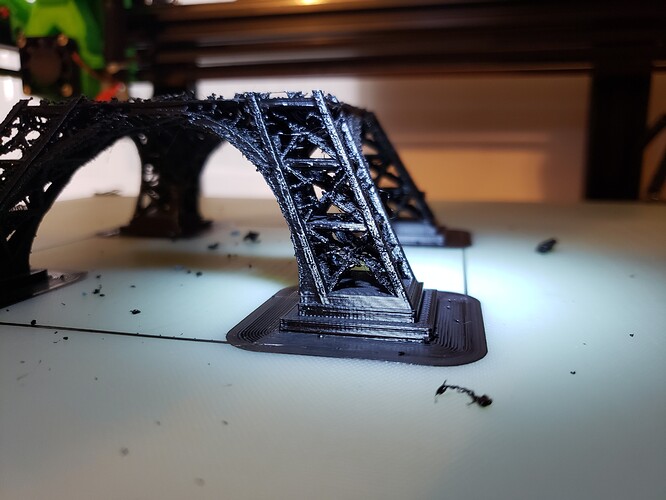 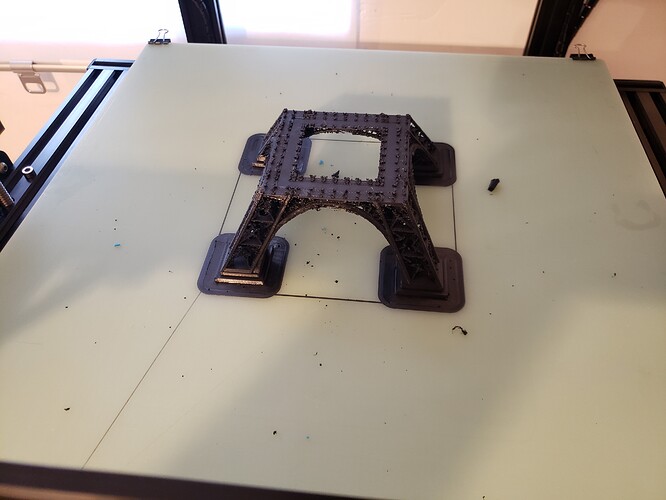 It looks to me like you have stringing issues. Most likely retraction settings but perhaps temp issues too. I would suggest increasing retraction and retraction speed a touch too. I might run a temp tower just to be certain.

On a hunch, try putting a box or something similar over the printer in order to enclose it.

I had a recent post wherein I was asking about a problem I was having with PolyCarbonate. The symptoms seem simlar: good bed adhesion but then the model starts to turn crappy further up with pieces of the fine detail (in my case infill) being broken off by the print head and scattered on the print bed.

I have not revisited it to confirm my suspicions, but it dawned on me that it could be temperature related:

On the bed surface, the filament cools more slowly because it’s on or near the heated bed, but further up it looses that advantage. Further, as you get into the intricate details, the segments being printed are smaller. In your case, the ironwork, in my case the infill. This results in small amounts of extruded filament (carrying heat) being almost completely surrounded by cooler air. The filament looses its heat much more quickly that way resulting in poor adhesion to previous layers. My theory (that I didn’t test), was that if I were to put the printer in a box or enclosure, the air temperature internally would be higher, and new filament would have a better chance of melting into the previous filament and not be flaked off.

I didn’t have anything handy to enclose the printer with, which is why I didn’t test it, but if you give that a try, please let us know the results.

Possibly could be an issue.

However, covering this beast is easier said than done. Print area is 400x400x525 so its rather large.

if you make a small test print. And I would no recommending leaving it, you can use a garbage bag as a test enclosure. I would suggest babysitting it, so a print that doesn’t take hours.

I print Petg with, and with out an enclosure often, and never really have an issue in either case. My artillery is not yet enclosed and as it can’t really manage much beyond PETg I may not enclose it. Enclosures solve many problems however.

Test it as see. A simple bag (Ikea bag? maybe) might give insight if it is retract settings or enclosure.

Personally I try the simple things first. Up to you.

My learnings from PETG printing:

I had this same problem with another brand of Petg. It was a fan we had on the other side of the room. Just enough to cause us to keep raising the heat. When the fan was redirected a few degrees to the other direction we lowered the heat and Problems went away. Perhaps a case over your machine would be a great problem solving start.