Ender 3, with removable magnetic bed (as shipped.) Made several prints without issue, good adhesion, minimal warping, and not difficult to release from bed.

I heat with both a Toyo kerosene heater and a woodstove; needless to say, there’s a fair amount of dust, and always there’s a film that builds up on plastic surfaces (and glass too) from the small amounts of smoke released when opening the door to add more wood.

This ‘film’ was starting to become pretty apparent on the printer bed, and having made several prints already, I decided to clean it up before printing any more. Used Windex and paper towels (my go-to for this film), and it cleaned up nicely. Printed a filament-guide loop… and needed a crowbar to get it to release from the bed… and in fact, the arm broke off about halfway along its length… had to use a thin knife to gradually pry the remaining arm off. The rim printed around the perimeter didn’t want to come up either. I still have to figure out how to get it off without damaging the bed.

My question is, what is the best way to clean the bed? Isopropyl alcohol, dishwashing liquid, household cleaners… what do you guys use? I certainly don’t want this unremovable parts thing to continue! I’m assuming the Windex was a mistake, and I won’t be repeating that!

My reading suggests I should be using a glue stick or something, not so much for bonding to the bed maybe as to provide a release agent. Anyone here who prints in PETG do this, and with what kind of results?

Were your prior prints also in petg? Petg can be particularly nasty for permabonding to pc build surfaces like the ender 3 comes with(ask me how I know😬) First thing to do would be to make sure your nozzle-bed gap isn’t too tight. I would make it as wide as possible without causing lack of adhesion issues. A gluestick would probably not be a bad idea, I know some use hairspray with good success(definitely take the build surface off and away from your printer to spray it on though). I personally have never used either of them however. I understand that a glass build plate or something like wham bam’s pex build surface are the best options if printing a substantial amount of petg. Again, I have never really used either of those(but I do have some wham bam pex build surfaces on the way for just that reason.

The only non-PETG printing I’ve done was with a hank of PLA that came with the printer… enough to print half of a little 3" figurine of a cat (also the only file on the micro sd card that accompanied the printer.) I switched to PETG mid-print, and forgot to dial up the temp, so the first quarter-inch of the black PETG was matte finished and poorly bonded to the PLA; once I turned it up it became glossy and the bond was better.

I set the nozzle/bed gap to 0.1mm as suggested in numerous places, and it’s pretty even all across the bed. Is that too tight for PETG?

I just read about PEX bed surfaces in researching this issue; they make a point of mentioning that parts can be easily popped off once the surface has cooled… sounds like exactly what I’m looking for!

Thanks for the reply… I’ll try opening up the bed gap too!

Happy to help! I hope you get things working smoothly! 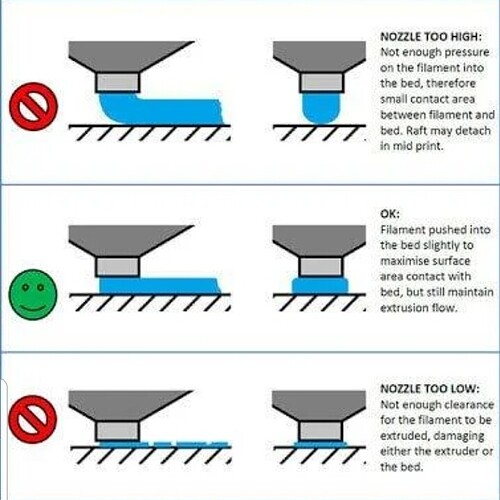 z-offset and adhsion720×719 79.8 KB
Adjust your z-offset to achieve good first layer adhesion, every filament is different, the PETG does not like to be squeezed as much as the PLA.