TPE does nothing but jam in the extruder

Like the subject says, I’ve just started to try to print TPE on my CR-10s Pro v2.
I’ve looked at a bunch of videos and setting recommendations, but so far no success beyond the first layer.
So far I’ve:

Suggestions anyone?
Will a direct drive be ‘better’?

For me, getting Tpu to print is all about that little space right after the gear. I ended up drilling out what they had there and running the stub of Bowden tube right up between the gears, shaving it so it just doesn’t touch, letting the gear wear the last bit off actually(pic attached). On my Titans, I did some tweaking also to make sure there was a minimum gap, but that the gears could still close. Some have done it like this Printables model, Printables 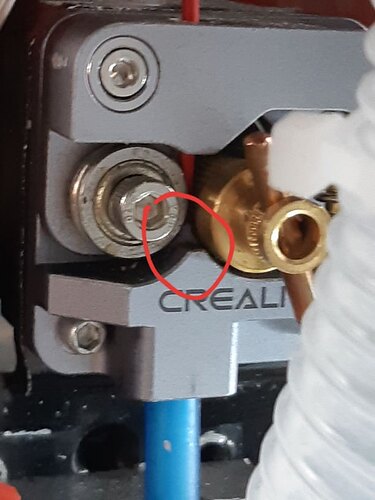 What @mobiobi said. This is the biggest advantage of a direct drive extruder.

Did you try other flexible s? Do you need tpe? I have printed flexible pla on a bowder tube that is loosley goosey with no issues.

just to add another thought in here, Is your extruder motor getting hot/warm, It could be getting “pliable” at the gear if the tension is too tight. Is the bearing on the opposite side of the gear nice a free?

I generally will print TPU, SPLA and TPE on a direct drive with extremely tight tolerances.

Bowden with flexibles is tough. It’s likely that you’re building pressure in the hotend you can’t relieve, causing heat creep to get it stuck where your PTFE meets the melt zone. You could try a very small amount of retraction to assist this, maybe 1mm or so. One of the cheaper investments to help would be a capricorn tube replacement. Make sure that if you do that, you change the fitting for your hotend. Capricorn tubing is a bit smaller diameter, so the standard push fittings may not bite them as well.

Ah I just noticed you stated TPE. TPE is generally 85A shore hardness or less. I’ve not seen a bowden setup perform well with those. TPU (a subset of TPE) is normally around the 95A hardness level and can be printed successfully on a bowden setup with some care, but 85A or less is normally beyond the limit of a bowden extruder’s capabilities to push through. Direct drive even sometimes has a problem with it if the path between the gears and the hotend isn’t totally enclosed. I print a fair amount of 82A hardness TPE quite well using a direct drive setup. Keep in mind that even though there might be drop-in direct drive solutions available for your machine, it’s essentially starting from scratch when it comes to building good print profiles and properly tuning your machine for the new components.