I don’t have a finished print of this, yet, but here’s where I’m currently at - probably another 25% left to go. 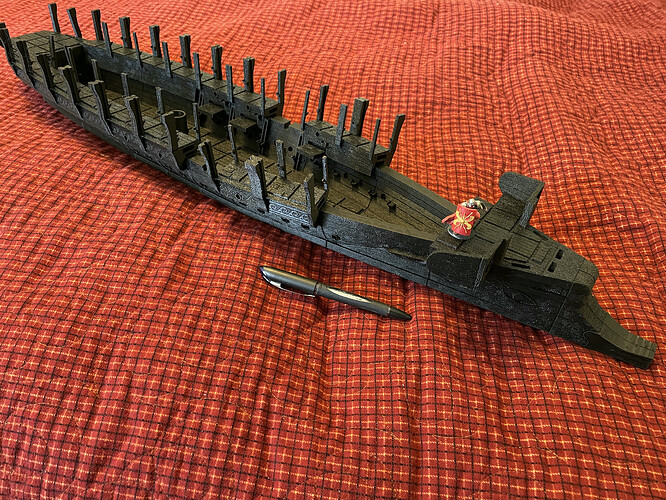 Thanks, I can’t wait to be finished! I have a kickstarter delivering shortly with a collection of Roman soldiers (and other armies) and i’d love to load it up with some Roman soldiers… and it’ll be hard to stay focused on this project when those files deliver!

@awalkerca I completely get that…not enough hours in a day to print what we want. So more printers it is haha.

For sure! I’m on a single printer and will stay that way for a while. Working from home makes printing much easier for me now, as I can just run it in the background.

https://www.kickstarter.com/projects/joinordie/march-to-hell-rome/description is the kickstarter I’m excited to have delivered. I know the FDM printers aren’t as good for minis as resin, but I’ve been pretty happy with my mini successes so far and think some armies are now in order!

I have another ship (well 2, actually) that i’ve printed - a Galley type ship and a Viking longship. Just no print logs for them!

Looks like you are going to be busy…good luck with the project, sounds like it is going to be quite the journey. Will be worth it in the end.

Another day done. Finished the prow “basket” layer (mid deck) and the vertical spike up the front.

Next up will be railings. 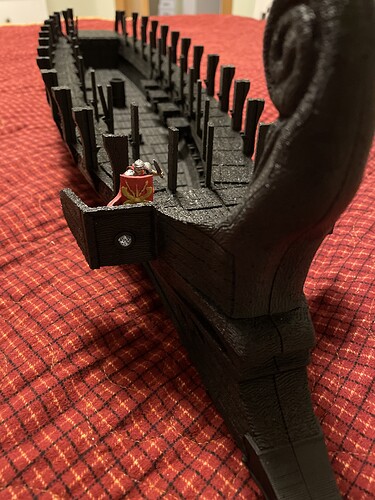 Another day - not so much room because I was on my last meter or so of filament so had to be more careful. I still finished up my stern section. Now onto the roof sections! 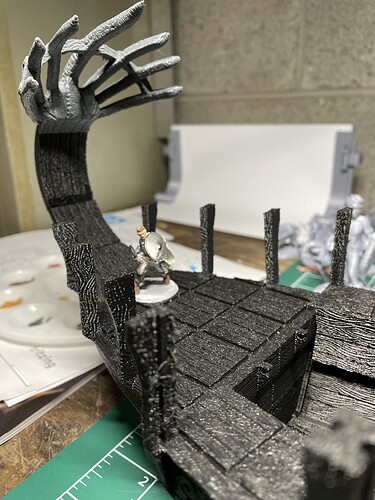 Another day. Got some of the roof section printed as well as well as some railings.

Ran out of black filament so have moved onto 3dprintintingcanada EuroPLA Dark Grey. 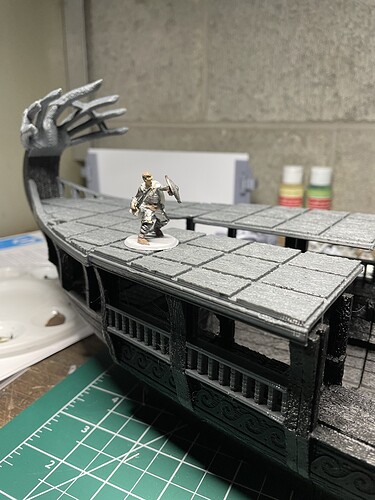 Some more roof. Didn’t get any railings printed but I’ll get them done soon. 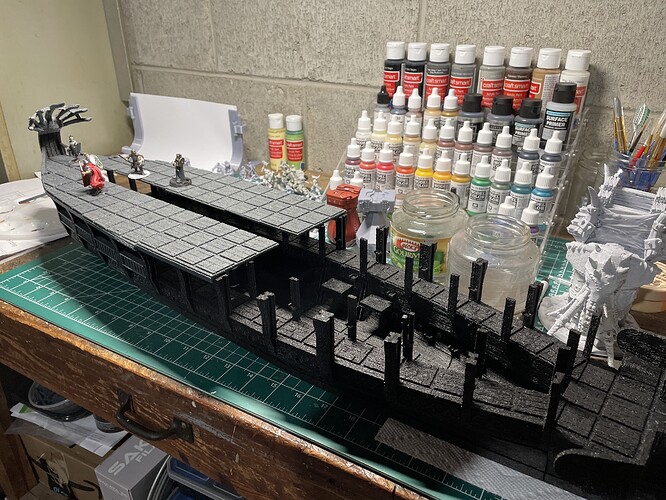 that’s going to be pretty bad ass when its done. Are you doing for yourself or a customer?

Thanks @Jason ! It’s for myself, for playing D&D and other tabletop war-games.

that’s cool, I’m going to keep an eye on the thread, like seeing it as its going together,

I didn’t think most people even knew what a trireme was. So, where are you getting the design from? That is to say, I noticed you got it from Kickstarter, but is it based on an archaeolgical reconstruction or just someone’s interpretation?

Also, I was aware they were used by the Greeks and Phoenicians, but I thought they were gone by Roman times.

The model I’m using is from Dragon Worksop. I don’t know his sources, in particular, but I know he did his best to model it against historical evidence where possible. I know this caused some extra work because the floor tiles for the Trireme, for example, cannot be used with his longship or river barge because he sculpted the hulls to be more historically accurate, at the expense of complete interchangeability. So I suspect it’s a bunch of historical sources boiled into someone’s interpretation.

The Romans had triremes (and quadriemes, quinquereme!) although they did evolve into other ships as well. The quad and quin variants, in particular, were famously used in the Battle of Actium. The roman style was different than the greek style (depicted in this model) as seen here. I’m poking the designer of my model system to release some alternate parts that would allow to create a more roman trireme so maybe one day he will.

But for my (gaming) purposes, it’ll be close enough!

Attached is a photo of a marc antony legion denarius (in my collection) that depicts a ship on its obverse! 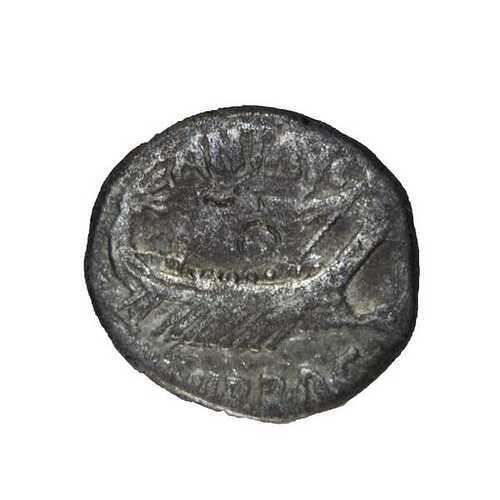 I took last week off. Other projects on the go and work was busy. I should have two days of printing left for the rest of the bow roof area. Maybe a half day left for remaining rails. So if all goes well, I should be finished printing this week.

Then some tuning and possible swap to 0.3mm nozzle for higher quality mini prints. 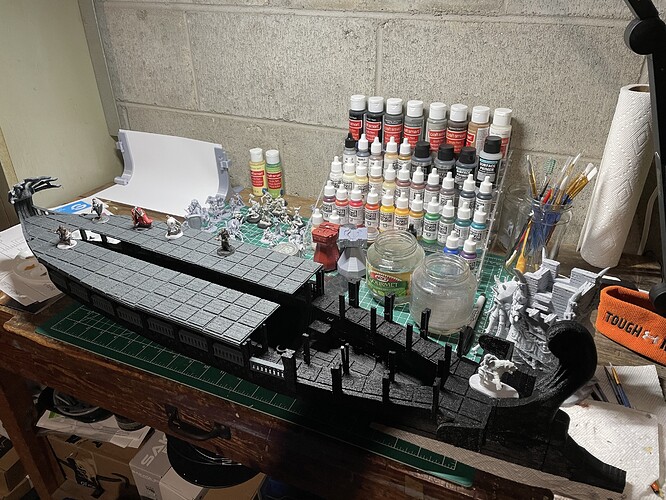 Pictured along side my two other ship prints. 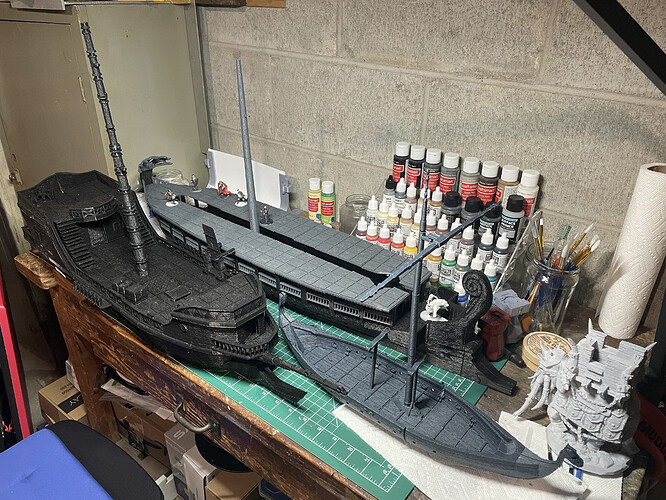