My father always had his Lionel trains running under the Christmas tree when I was little. When I moved out, the new house had a fireplace mantle and I used to set up a winter scene on it with a train running thorough the town. Static, of course. It was just a fireplace mantle.

When we moved to this house, the fireplace mantle was twice as wide and 16ft long, so I got it in my head that I could put an actual working railroad on it complete with a lighted town, crossing gates, a skating rink and a rail yard at either end. The problem was, it’s still not wide enough to turn a train around on. Yes, I could run it backwards but that’s not very realistic and prone to derailments. The solution was to put a turntable at either end with a run-around track to pick up the train again and head back. My ultimate goal was to make this computer-controlled so it could just run in the background every 15 minutes.

My model-making skills suck and the wooden turntable kept binding or wobbling or failing to align itself properly so that never went anywhere beyond a static model or manually running the engine without cars.

The next logical solution would be to buy a commercially made turntable. There were three problems with this: 1) they’re meant for a hole cut into a standard height table ie. you can make them as deep as you want, whereas this needs to be shallow; 2) even the smallest ones are too large for the mantle, and 3) even the smallest motorized, computer controlled ones start at around $400 - and I’d need two of them.

Now that I have a 3D printer, I’ve revisited the problem: 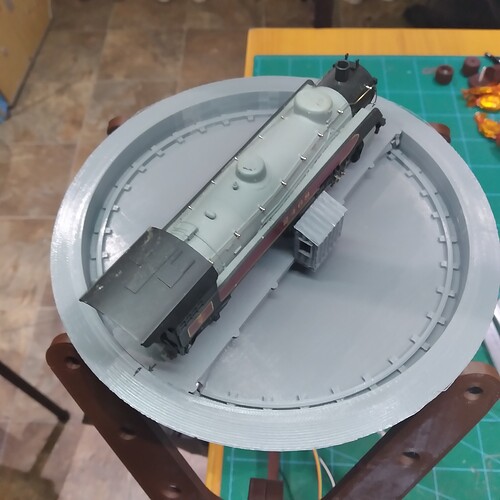 Add a $7 Arduino, a $5 Stepper motor and a $20 Adafruit Slip Ring (to provide continuously rotating power lights, track, position sensors, etc.) and I’m in business. This project alone will pay for the printer.

As a bonus, the movement is very smooth and super quiet, unlike some of the turntables I’ve heard. The gear backlash can simply be programmed out. I was going to post a video of it, but that’s not supported, apparently, but you get the idea.

That is awesome. You cN host a video on YouTube or even imgur.com but only up to 1 minutes long. How does it make up the gap between the turning and stationary track or is it just close enough?

If you look closely at the photo, the gap is super thin, but consistent all the way around. I managed to jam it with 1 sheet of paper on either end. There’s no way my pathetic modelling skills could have made it that precise. In fact, when it comes time for me to cut the track for it, there’s no way I’ll be able to get it that precise.