What CR-20 Mods Have You Done?

I’ve had my CR-20 Pro for about a year. There’s not a lot of love out there for this printer but it can make some impressive prints.

I immediately set up a Raspberry Pi with OctoPrint and got a 1080P web cam to have total remote control. I can watch the print from anywhere in my house.

The first mod I printed was the chain guide so the cables in the back don’t rub on each other.
Bed Bracket Creality CR20s pro Cable management by JSW72 on Thingiverse: https://www.thingiverse.com/thing:4255651

I was spending a lot of time trying to get prints to stick to the flexible magnetic sheet that came with the printer so I bought the Creality glass plate which I’m very pleased with. I use the top side and have not had issues with PLA but I sometimes use have issues with PETG - but I’m new to this material.

As the weather got cooler and I print near a door, it was time to invest in an enclosure. I looked at the fun DIY projects but settled on the Creality made fabric enclosure. It’s great to stop warping of prints from a draft and keep the dust off. The kids an see what’s printing and I don’t have to worry about them getting burned. The temperature inside gets to about 37 and humidity drops to 15%. It’s a good time to dry some filament that wasn’t packed away nicely.

In November my extruder release lever broke which gave me the excuse to upgrade to the Micro Swiss Direct Drive Extruder with All-Metal Hotend for CR-10. It introduced zebra banding or salmon skin into my prints. I was in a panic to get Christmas presents done so didn’t try to fix it with the Creality board. Instead of bought the SKR mini E3 V2 board which solved the problem immediately. This SKR board is so quiet I can’t tell when the printer is actually printing and it sits behind me all day! I love how quiet that is.

Next up is integrating a filament run-out sensor into the Pi, setting some colour changing LEDs to indicate status of prints, building a dry box, and use my Neural Compute Stick 2 to detect print problems.

Has anyone else done some modding? 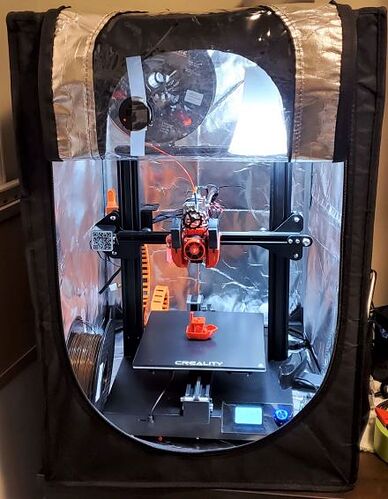 Looks like we went down similar paths.
I immediately upgraded the board in my CR-20 Pro as well as the display because I wanted quiet steppers and a 32 bit board so I could change firmware more easily. I designed a case for the new display that magnetically attaches to the printer body and the cables run into the opening from the old display through a locator pin that holds the new case in place.
I also swapped the magnetic bed for the glass one right away.
Then I had problems with the stock extruder skipping and the bowden coming loose so I also installed the MicroSwiss direct drive with all metal hot end.
I figured with the extra weight of the MicroSwiss it wouldn’t hurt to constrain the gantry a bit more and do dual z.
My OCD hated that the stock spool holder was so floppy so I printed a new one that spins on a pair of repurposed 6806 bearings that I had sitting around from a bicycle and designed some conical wedges to adapt to different internal diameters of spools.
Finally I added a smart filament sensor and designed a mount for my wifi webcam. I haven’t gone down the Raspberry Pi route with Octoprint but for now the printer is plugged into a smart outlet so if I need to I can kill the power to it when I’m at work.
I’m also thinking about that Creality enclosure to help with warping on PETG from drafts and my cold Canadian living room. 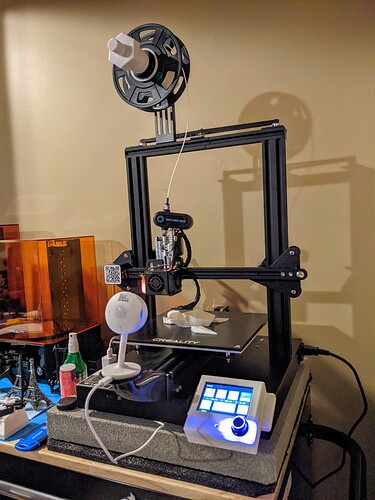 Still on the list is a BTT UPS Power Detection Module, and an enclosure. I might also try a pancake stepper for the extruder since it would be better for weight and the full size one made me lose about 30mm of Z height.

Hey guys, I know I am a little late to this forum, but I too own a CR-20 Pro. I would really like to do the upgrades you guys did to yours. I have modified firmware but only basic stuff, just enough to upgrade to Marlin 2.0. Other than this, my CR-20 Pro is stock and begging for some upgrades. If I was to add the BTT SKR E3 Mini V2, Micro Swiss Direct Drive Extruder, BTT Smart Filament Sensor, and BTT Display, what needs to be changed in the firmware?

If you switch all of those parts you would basically have the same machine as mine so the firmware would be the same. I did add a tft35 e3 v3 display since it was a fairly cheap upgrade and is much nicer than the stock one.
The display might be the only thing that would make my firmware different from the upgrades you mentioned.
It was a while ago that I did mine but off the top of my head the only firmware changes were for setting up the bltouch, selecting my display, and enabling the smart filament sensor. There are sample configuration files for marlin for the btt boards for ender 3 and I just based mine off of that. The other things that need to change are things like home offsets, zprobe offset, e-steps which I did update in my firmware but can changed on the machine afterward too. Don’t forget to pid tune the hotend and bed as well.

If you do proceed with all of this and do the tft35 I can send you my firmware as well as a model for the magnetically attaching case for the display.
Swapping out the board to the skr mini e3v2 also meant a few of the plugs needed wires swapped around and I do have some pictures of mine when it was all done for reference.

Wow thanks, I currently am battling with my print bed not staying level. I figured I would have a go at UBL so I recompiled some firmware this morning. Should I use PID bed for this printer? How close is the CR20 pro to the Ender 3?

I was thinking of doing the upgrades closer to Christmas so I will keep your offer in my mind. Thanks for being willing to share your STL file, firmware, and pictures with me!

When I mention PID I was referring to tuning the heating algorithm that controls how it knows when to turn the heaters on and off to maintain a steady temperature. It is something you do when you change components that would affect the heat such as installing a new hot end or when I switched to a glass bed from the thin magnetic one.

As far as how similar a cr-20 pro is to an ender 3, they have a lot in common. The cr-20 came with better Capricorn tubing, Gates belts, and a different chassis. None of those things make any difference to the firmware and electronics.
On the electrical side the main board and display in the cr-20 are from a model of cr10 I think, and the bltouch is installed.
So when switching to a different board like an skr mini e3 which is meant for an ender the only real difference is that you’re basically just using an ender 3 with a touch probe.

I did remember one reason I changed my display to the tft35 when I changed the main board. The stock cr-20 display plugs into two of the larger EXP1/EXP2 ports and the SKR Mini e3 v2 board only has one of those plus a different shape port for the TFT. Looking at the original post it looks like the stock display still works but I didn’t know when I did mine.

Microswiss teased a new extruder on their Instagram recently that they said is coming soon so if you’re waiting a bit before doing upgrades the new one might be out by then anyway.