Ok, new to this forum. I’ve had my Cr-10s for a couple years and it seems every time I fix as issue, something else comes up. I find I’m still learning terminology as I go along here.

I’ve had a concern with my z-axis for a while, I get bands about 8mm apart in a corkscrew pattern. With some research there was a question of wobble, If I understand correctly it’s about the Z-axis lead screws. I’ve watched both and theres definitely a sway of 1-2 mm or so on both.

So I started looking a videos on removing/fixing and in one case the guy was moving his entire X gantry up and down as simply as lifting the weight of the bar (the screws just slipped without much friction), in my case it takes serious effort, holding down the bed as I apply a lot of pressure (and yes I disabled steppers) I have lubricated the screw with 3 in 1oil. And I’ll note that when it does move, and more obviously with the down direction you can feel a repetitive friction like a throbbing as it moves (could it be the stress on the screws from the wobble?)

So as much as it gets me a bit anxious about taking this apart, I want to be sure I understand what I should be looking for/expecting.

Can I physically re shape the screw if the bend is slight? I’ve read it’s possible.

How smoothly and easily should that X-axis gantry move on the lead screws?

Is there anything else I should be looking at for this problem? (I’ve lubricated, loosened and retightened the t-joints holding the vertical aluminum extrusion, I’ve adjusted the bolts to the tension wheels holding the gantry to the frame and I’ve reseated the cables)

The person in the video showing the bed moving up and down effortlessly is demonstrating a flaw in some printers whereby the lead screw has a relatively large pitch. I don’t know what it was, but let’s say, 8mm. That’s great for speed. It means one rotation of the lead screw will move the bed 8mm but then again, when does one ever need to move the bed quickly? The down-side to this is that with a little bit of weight on the bed the lead screws will simply turn on their own. That’s a major problem if you’ve had a power failure, the motors, obviously, turn off and the bed starts to descend under the weight of the model. That completely kills any hope of using a “Resume” print feature. Printers like my Ender 5 Pro use a 4mm pitch so the bed moves more slowly but can support considerable weight without moving on its own and, hence, I can recover from a power failure.

On the subject of lubrication, before I get side-tracked and forget to mention it, this is the recommended lubricant:

As far as I am aware, the most common cause of bent lead screws is people carrying the printer by the gantry rather than by the base.

Check that the lead-screw motors have not come loose. There’s a shaft coupling between the motor shafts and the lead screw. Make sure the tiny grub nuts are tight. There are two of them at each end. They should both be screwed in about the same amount. If one is screwed in much further than the other, the shaft may be slightly off-center. Admittedly, there isn’t a lot of room to play here, and I doubt any slight misalignment here is going to be all that noticable, but it’s worth a look.

At the top of the lead screw, the bearing that holds it in place can also come loose. make sure it’s attached tightly to the frame.

Those are minor adjustments you can make if an entire lead screw is wobbling, but if it’s wobbling mostly in the center, then the lead screw is likely bent. The only way that I know to test that for sure, short of using a mechanic’s run-out gauge, is to take the lead screw out, lay it on a table and roll it. If it’s bent, it will be obvious.

This is a big machine I think. the Z lead screws are supposed to lift the X-axis only the wheels are supposed to keep it moving in a constrained manner. That being said the wheels are just plastic. if one of the lead screws is hard to turn it will bow while lifting. they are small diameters with a lot of thread starts so the root diameter is really small and doesn’t take much to bend them. This bow can stay as a bend if it’s not great material but likely it’s only bending under load. You said “with the down direction you can feel a repetitive friction like a throbbing” This stuck in my mind because many printers (mine too) use brass nuts for the lead screws, and brass. if you rub it will make your hands turn black. this wear product actually acts as a lubricant and also being brass it’s a sacrificial part that makes everything work smoothly, the problem is this black stuff can clog in the threads and it will feel just like you are describing. Sort of a stick-slip but very harmonic in frequency, and oil will make it worse. I’d recommend taking the lead screws off. make sure the X carriage slides up and down smoothly and would fall as if you dropped it out a window when you let go. Then put the lead screws back in, loosely, after cleaning and inspecting everything for schmutz, then gradually tighten everything down while trying the Z-axis as you go to see if anything you do tightens it up. you can also roll your lead screws on a good table while they are off and see if they are bent. yes, you could straighten them… it’s a process though, I’d replace them if they were bent and I have all the tools to do the straightening… it is an interesting skill though if you like restoring stuff.

Thanks, between your comment and the one below, it looks like I have some work to try this weekend.

Thanks Glenn, I’ll give this a try on the weekend and we’ll see where it goes.

Well, report back so we know if it got sorted out or not. heh

Ok, I’ve taken the Lead screws off, they appear to be as straight as they should be. I also adjusted the bolts holding the gantry wheels, I think they were too tight. But I did note 2 other things that I’m guessing are problematic.

First, on the right side (from front) the top bearing/rod holder is definitely causing tension, the rod slips through the brass nut just fine, but when attached through this bearing, it’s difficult to move unless I apply upward pressure on it. I’ve tried loosening and moving it but nothing allows the rod to move freely. There’s no way to adjust this, unless maybe putting some material (like a strip of paper)along the Bottom end between the Aluminum and this bearing?

Also, the couplings at the base - neither are directly aligned with the z-rod. The one on the left is almost an 1/8th off, so once you force the rod in there, yeah a fair bit of stress, especially the closer the gantry it to the coupling. 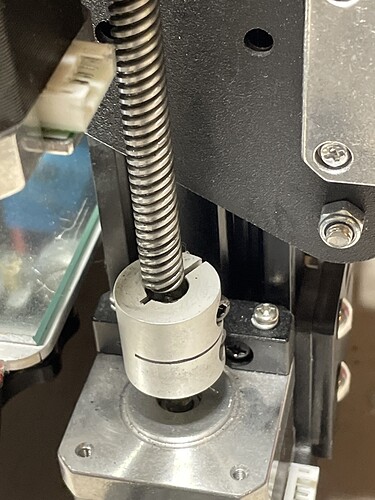 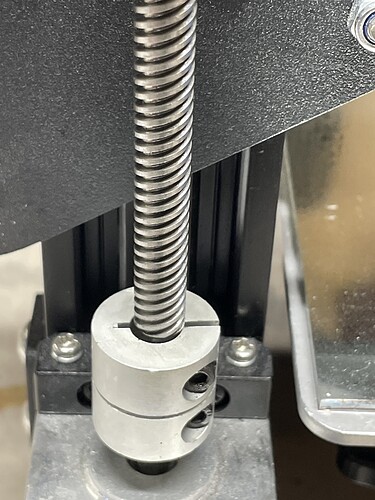 I removed the motors to see if there’s a way to adjust and as far as I can tell, there isn’t. The vertical screws are directly into the extrusion (not those rotating nuts used elsewhere.

So, any further suggestions?

I did take a couple videos, but this site doesn’t allow them.

yes, that’s way more misalignment than the coupling can deal with for sure. some component is bent or not made properly somewhere. can you take a photo of the rest of the structure that holds that rod in place?

These parts
“The rod slips through the brass nut just fine, but when attached through this bearing, it’s difficult to move”

Wow that is rough. I have replaced the nut on my printer and also the coupling. My printer (Sidewinder X1 sorta a Creality all owned by the same parent company) The nut has a bit of play, some not a lot. I used a pair of brackets to rest the X axis on to replace the couplers. There is a grub screw on some couplers not the pinching ones but one that moves in and out to centre the rod. You might check to see if yours has one. I might also see if there is a part on thingiverse that will allow the lead screw nut to be held but still have a touch of lateral movement. 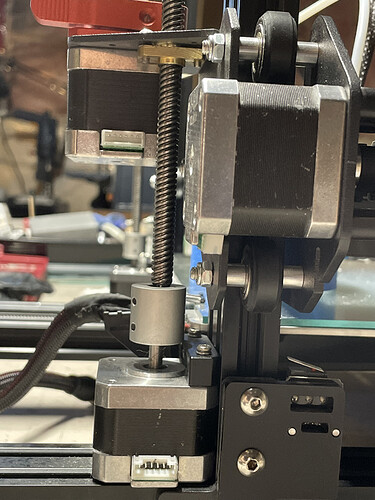 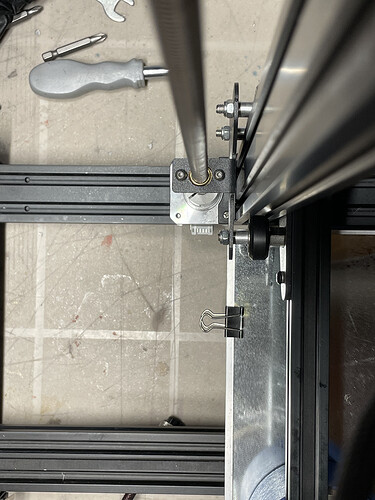 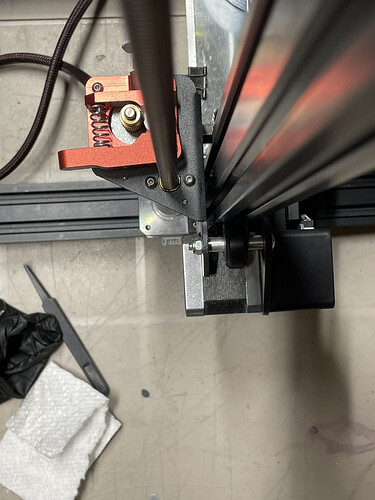 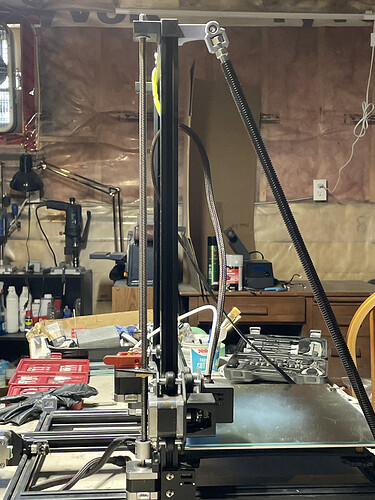 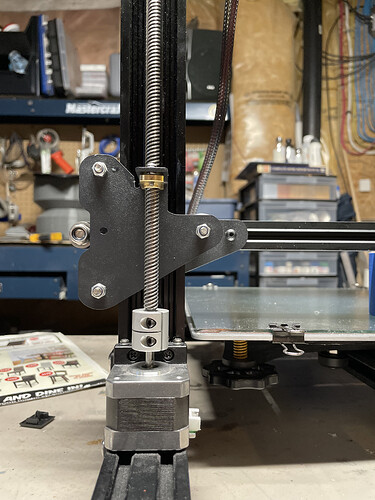 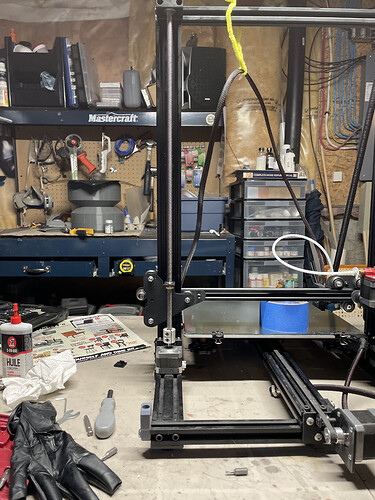 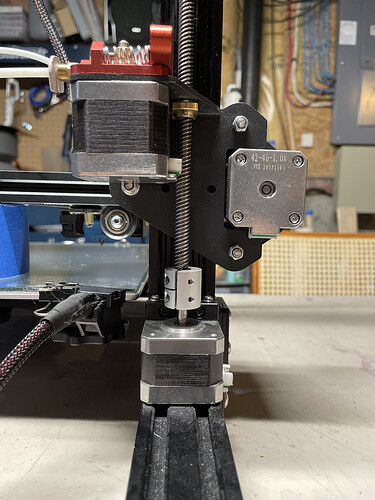 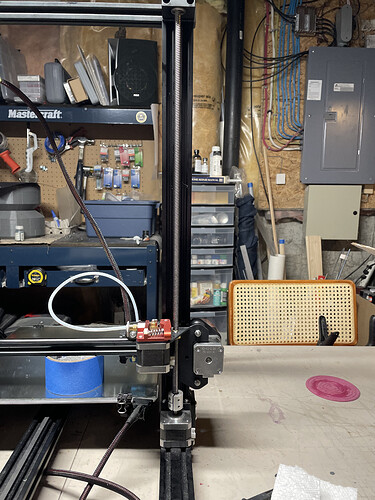 That is quite off you might need something like an Oldham Z-Axis Coupler. It has a joint to allow the rod to be straight when the motor is crooked. It should never have happened in the first place. I am sorry you are dealing with this. If it is a new printer I would contact Creality and make then fix their mistake. 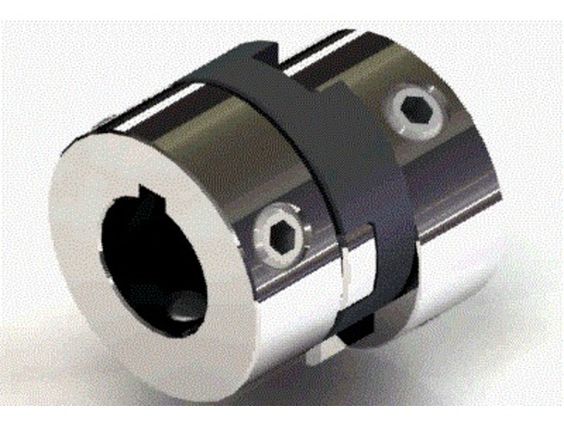 I see,. looks like the bracket the brass nut is connected to is probably bent. the face the nut is attached to needs to be parallel with the face of the motor. You might be able to bend it back but so it’s closer but eliminate all the attaching parts a being the problem first. Bending it back might not get it perfect but it can be close. then you can shim the nut while you tighten it so it’s not pulling it all out of alignment

Can the steppers be shimmed? How are they held on the extrusion?

Which bracket are you looking at? I want to be sure it’s not just a distortion of the camera.

The Steppers are bolted directly to the extrusion, so the only shimming would be along the Y axis, not the X that it needs.

the bracket with the Extruder and brass nut on it. that and the face of the motor have to be parallel so all the holes the rod go through are in line as close as possible no matter where the X carriage is in the Z axis travel. If that motor is attached to a diferent aluminum extrusion than the X carriage is running on that could be the problem in that joint isn’t exactly perpendicular. The motor might be square to the one extrusion on the bottom and the rod could be square to the vertical one