Any tips for glueing parts together.?

Anyone have some tips for glueing parts together?
What type of glue works best? Any good application methods?

I’m working on a project where a bunch of parts will have to be glued together and I’ve always been a bit messy and awful at glueing things together.

It, of course, depends on what materials you are using.

I had problems with LePage’s Ultra Gel Super Glue. It wouldn’t stick to PLA. I figured all "Crazy Glue"s (cyano-something-or-other) were the same but someone suggested Gorilla Glue’s version and it works quite well.

Good point!
I’m actually going to glueing Resin to PLA here. But in the future it will probably be either PLA to PLA, a Resin to a Resin, or a Resin to PLA.

I may have to try some Gorilla Glue, the generic tubes of super glue from the dollar store are not cutting it!

I use Gorilla Glue for resin to PLA, seems to work well. The gel type use easier to use, not as runny.

Here is a link Joel was using a specific glue for the F1 racecar project.

Not sure myself about local available glue.

I use cyanoacrylates ‘super glues’ they vary a bit but past that. The PLA solvent type will not work unless you are gluing pla to pla.

Surface prep. it must be clean, no oils, no left over glue stick. clean. I use soap and hot water and then a little scuff with steel wool. and a wipe with ipa.

I have used the gorilla glue, but prefer the real deal. I like permabond 200 it is a lot stronger and dos not ‘bloom’ no white residue. I would suggest some nail polish remover kept handy. If it touches your skin it will glue instantly. I had an aluminum spacer stuck to my finger for 6 hours. It is not easily removed. Nail polish remover helps break the bond with out breaking the skin.

@Logan5 would know lots about this. He builds some pretty impressive parts.

I regularly use Gorilla glue, works good for me.
If you can find it somewhere, 3D Gloop works the best.

I just use super glue if it’s PLA

I use the Gel Gorilla super Glue on PLA for every project. The gel is thicker so I find it is better to ride the imperfections.

For small parts like staffs, swords, etc I somtimes use UV resin. In general, I now use this, available on Amazon 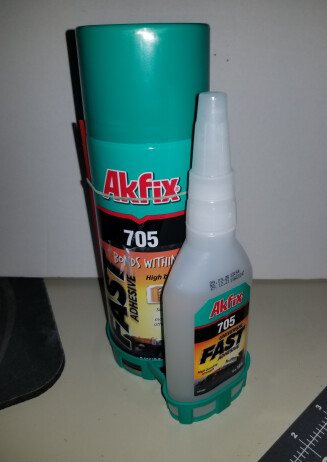 Thanks for all the tips and input everyone, they were super helpful! I wound up using a few different glues together for some great results.

I used a Gel Superglue (I used both a Gorilla and LePage variant) for PLA to PLA or PLA to rough resin, the gel consistency really filled the layer lines or rough areas well and bonded great!

For tiny parts, my local Home Hardware had Akfix 705! The two part system makes that stuff bond so fast. It was great to tricky to set parts, or for parts on weird angles.

I tried out Permabond 200, my work had some laying around. It bonds realllly well, but it was a bit too viscous for what I was doing this time.

I also tried out some clear UV printing resin, its just trickier to work with. However it gave everything a cool glossy finish. I used it as a finish coating rather than as a bonding agent in the end.

I’ve been trying to hunt down 3D Gloop, to no success. I just really want to try it now that I can’ t get it…

Here are two quick pics of what I was gluing together now that the LED’s are in the base and the glues are all cured! It’s a bit of an odd one, but it was a custom gift with an inside joke.
The base that is hidden in the shadows is PLA with just a flat surface, I’m surprised things bonded this well! 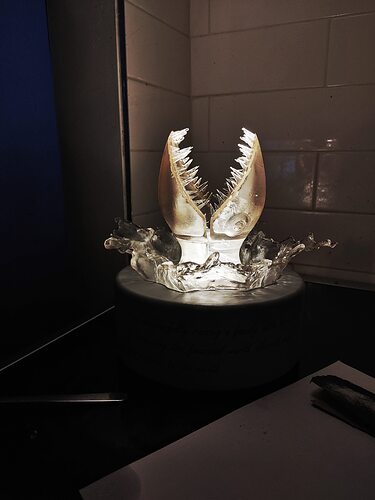 That, my friend, looks awesome!

that really does look great, feels like something out of little house of horrors? is that the right movie name?

A little late to reply here… but a few weeks ago I bought 3D Gloop at Filaments.ca in Brampton. Worked very well, but stinky as heck… and definitely wear gloves as it applicator is attached to the lid and, drips on you hands… (as you did just have to shake it for 30 sec).

Gosh, I wish people would be more specific.
Gorilla makes about 12 different adhesives. I use their PVA for wood.
This "705 " I see mentioned is nothing more than a CA (superglue) glue with a spray bomb of acetone to accelerate the process. There are many brands and they all work.
You can get it at home depot for 20 cad, in the paint section, with the epoxies and other adhesives.

gel superglue CA is my go to, they are so similar I don’t think the brand matters. Keep it well ventilated until it cures, it clouds.

If you want an activator for super glue use water. I usually apply the glue and hold the offending parts under a water tap. It works and sets instantly.

I had no idea you could use water as an activator? or is it a temp thing to make it work quicker?

I have never seen water used but I have seen water and baking soda mix used. That said CA accelerator isn’t very expensive. It bonds instantly.