Using Cura, my 5 plus was was drawing a purge line on a 45 degree angle right thru the center of the build surface. I got that figured out. Seems there is some bug in the Marlin Firmware and this is what you get when you call M420. So, I dumped M420 and opted for G29 with an F2 fade height instead. So this is my printer start up file currently.

So this got ridda the 45 degree purge line across the center of the build surface. But now, calling the G29 code, the BL touch probes the bed in an odd way now. It comes right to the front, just a few mm from the edge, kinda scary, and doesnt probe far enough to the right leaving 20% of the right side of the bed untested front to rear…

So Im thinkin somehow I need to edit where the BL touch probes the bed.

Anyone got any idea how that is completed? Be gentle now… Imma kinda a newbie at this

The design of the BLtouch makes it very probe-heavy on the Left side. I have seen different mounts trying to make it better but it doe probe heavy on the side of the nozzle that the probe is mounted on. If you want to offset or “center” the probe a little you can use the M851 command and set up proper offsets. It does not change the weight of the probing but rather the location of the probe. I cannot find the post right now but it was one of our regular guys posted another way to relocate the probe set but cannot find it for the life of me right now. I know I had replied to it about my pref for the 851 but must be getting old, just cannot find it right now.

This issue showed up when I changed the printer start up file in Cura.

Apparently M420 was causing it to run a purge line thru the center of the build surface. G29 fixed this issue.

But when G29 is executed at the start of a print, where the build surface gets probed has changed. The first probe point is the front most left hand corner as you face the machine. But it comes so far forward, the probe itself is almost off the table. Way too far forward. It almost like there is a stored map of where to probe for another machine programmed into the firmware. But when i do the bed leveling thru the menu, it works fine.

So you must be familiar with this problem if you run 5 plus machines yes? This is supposed to be a known issue.

Was taking out M420 and replacing it with G29 the right move to correct the purge line issue?

I have to find a way to tell it where to probe. If you wish I can shoot a video of what it does for a better explanation.

::Update:: I just got Pronterface connected to the machine.

For shiggles, I sent it the G29 command. And it did the proper probe pattern on the bed. So that must mean something is upside down or backwards in my printer start up file.

Can you see what might be causing this?? Or do you have a better start up file?

If you can post the starting section of your Gcode here I can have a look at it and see what I can see. trying to keep most posts here as much as I can so they can help others.

Sure. Its already posted at the top of this thread, in my first message. Just scroll up a bit.

Do you use Cura and if so, what start up file do you use?

If your purge line is running diagonally, are you sure you don’t have Cura set up to use a CoreXY printer? CoreXY printers need to operate 2 motors to get a straight horizontal or vertical line. If you run CoreXY Gcode on a cartesian printer, everything gets rotated 45 degrees.

I selected Ender 5 plus in the menu. All the settings came with that choice. See the attached photos.

This issue has been reported by many. Happens when M420 is in the start up file and stops with replaced with G29. 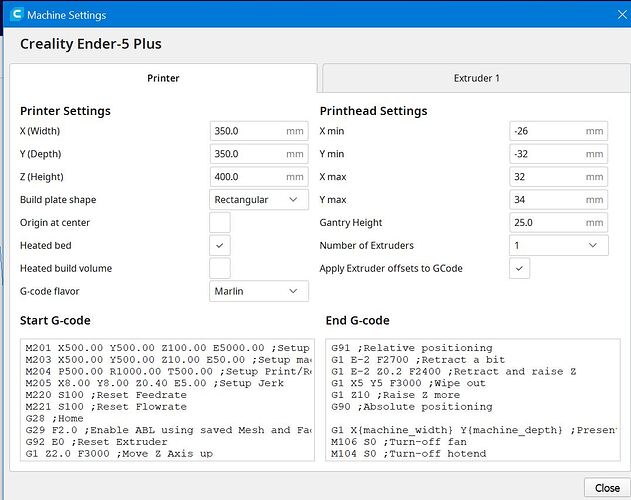 Hey Trinity, have you tried running the gcode with both G29 and M420, in that order?

I thought it was an either/or type of thing, so I also replaced the M420 with G29 in the gcode when I was getting the diagonal purge line starting from the centre of the bed, but then my leveling never seemed quite right despite having the BL Touch deploying before every print…

Having both G29 and M420 in my start gcode seems to have solved multiple problems for me, in terms of better mesh leveling and no more purge line starting in the middle of the bed.

I don’t fully understand why it fixed things, but it did for me, so it may be worth a try in your case too!

Sorry about the earlier Msg, Answering quite a few threads on here didn’t realize you had already posted the Gcode.

There are quite a few weird things that can go on with the M420. I have seen it probe/not probe, Probe in the air(yes I have seen it), Purge on 45 deg and so on.

Technically in the documentation, the M420 and the G29 are supposed to be 100% interchangeable. same switches and options are available. however, in real life, they do not equate to each other. Generally speaking, I find if you are using a stock machine with no upgrades the M420 will work, Until it doesn’t. and yes I know this sounds weird. for some random reason, I have had many machines randomly start printing that 45 deg purge line with no reason ever found. I have actually gone to the extent of I tried to print the same SD card on 2 different machines with the same configuration and one does the 45 deg thing and the next one prints normally. to me, that would tell me that the problem is in the printer and not in the slice, Specifically the interaction with the M420 command.

Now the next step for me was to manually enter the command and make the purge lines individual. This surprisingly worked which makes it even more baffling because that’s telling me the problem is in the Gcode. (or maybe the SD card itself)

I have had a minor success that if I deleted the printer in Cura and recreated it from scratch the problem would go away for a short time but always comes back. This again tells me it’s in the Gcode.

The Current workaround I use is to change the M420 to the G29 (with whatever options you want) to now have the issue “hide” itself, although I am sure that the problem still exists. I have yet to see it happen that once the diagonal line starts being printed it goes back to straight at a later point in time.

At some point, I would like to use an Arduino and actually debug what is being sent to the printer and see if there is a difference there but to be honest, just don’t have the time, I did record my findings and submitted them to Marlin Via the Github but I am sure they must get thousands of requests of things like this so all I can do at this point is hope. The more people that report it as an issue the more likely it will get looked at and confirmed as a bug and have a fix issued.

I know this is long and not extremely helpful but I will gladly let you know what I find.

Yep there is a bug. likely built into the software. This I know.

Taking out M420 and replacing it with G29 got rid of the 45 degree purge line issue. But it induced another issue and that is the focus of this thread. 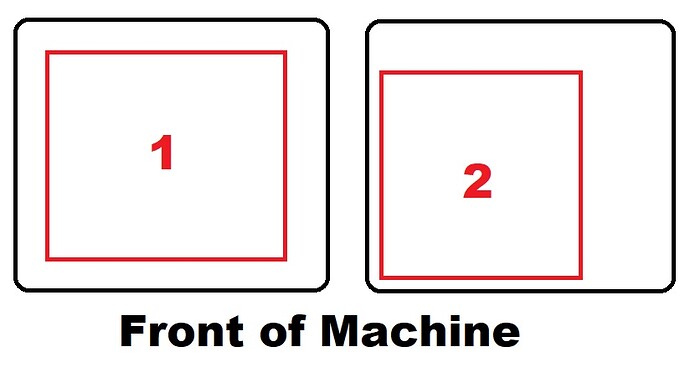 When M420 is used in the printer start up file, the bed is probed in the area marked as 1. I consider this normal. But it draws a 45 degrees line from the front left hand corner right into the middle of the bed. Not normal.

However, when M420 is removed and G29 is added in its place, the bed is probed in the area marked 2. I dont consider this normal. The first line of the scan is registering as Y0 and almost right off the table. You have to remove the clips that hold the glass bed down or they will be hit. But the odd purge line is gone and executes normally. ( two lines down the left side)

This is the issue I am trying to solve. Induced by adding G29 to the start up file. Why does calling the G29 command from the printer start up file cause the bed to be probed incorrectly? What does one need to do to correct this issue?

It’s probably the ref to the Offset that is set with the M851 command.

BTW your pics are perfect, I may have to steal them for other probing descriptions.

Jason, Thanks for the M851 trick, but sadly it didnt work. It went straight to Y0 again

HOWEVER. I got suspicious. When I removed the M420 command and replaced it with G29, I also added F2.0. That set my fade height to 2mm. Since it is a well know adjunctive command that goes with G29 I thought I would be Mr Smartie Pants and add it. Marlin shows it as a valid statement. So simply I entered G29 F2.0

Just for shiggles I removed the F2.0 statement. Me being the suspicious type and all that little voice in my head said “I wonder what would happen if I took that out”

Well colour me shocked and call me surprised. It worked. Its now probing the bed in the same pattern as M420. I just have to live with the fade height of 10mm built into the firmware.

So, here is a big answer. To get ridda the 45 degree purge line on an Ender 5 Plus for those using Cura, simply replace M420 with G29.

So this brings me to the next fish to fry. Please review the attached image. 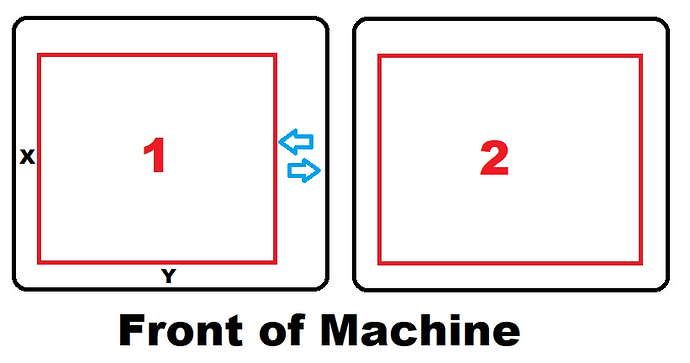 So, image 1 shows the area of the bed now probed during start up. It leaves much the right un probed with lotsa space left for the X axis BEFORE hitting the stop switch. See the blue arrows. To me, this area should be probed too.

Image 2 shows how it should be. Its like somehow I need to alter all the x and y co-ords for the probing scan to properly cover the bed.

Does anyone know how to edit those 16 probe co-ords???

Cheers.
(Feel free to use any of my images you wish)

There are a few things with the BLtouch none to least the left side heavy probing because the BLtouch is mounted to the left of the nozzle.

There actually is not enough room to get the head out of the way to properly probe the right side of the bed. Teaching tech has a really good video on it reworking Marlin so it probes evenly around the bed but essentially he is increasing the gap on the left side and leaving the right side as is. It Appears to be more centered but in actual fact its just probing less area. visually it looks better but personally I don’t feel its as accurate because there is less surface that is actually probed.

Just my 2 and a half cents.