Ender 5 plus stock board Klipper fubar

My attempt at switching My Ender 5 plus over to Klipper has FAILed. It is frozen at the creality screen.

I have Klipper Moonraker and Mainsail running on an Orange Pi (the orange Pi threw a few curves of it’s own). I used KIAUH to install everything without issue. When I flashed the MCU with KIAUH ( AVR atmega2560 “using build and flash”). Everything seemed to go OK - no error messages however the screen is locked at the creality logo and Mainsail will not connect. I tried to go back to original creality firmware but I can’t connect to the printer through USB. The com port shows when connected via usb to the computer but nothing there. KIAUH shows the USB port see and that port is referenced in the printer.cfg.

Any idea what went wrong? Is this thing bricked? My plan was to switch to a BTT Manta M8P board but I figured that I would play around with Klipper/Mainsail to get comfortable while I wait for the new board to arrive.

It shouldn’t be an issue - but it sounds like you haven’t loaded the Klipper firmware into the printer’s controller. You’re not going to get very far without doing that.

You should build your own Klipper firmware, but that’s dependent on the controller board you’re using. As I understand it, there are at least Creality options for the Ender 5. Don’t rely on prebuilt firmware you download off the internet - building your own firmware image on the Orange Pi is actually less work than searching for what looks like the write image.

Here are instructions for setting up Klipper on the Orange Pi: 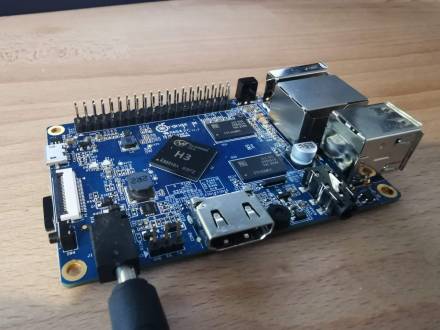 The Orange Pi PC is one of many open source single board computers (SBC) that have sprouted up over the last few years due to Raspberry Pi popularity and in more recent time shortages. The Orange P…

Here are fair instructions for making Klipper firmware on a Creality 4.2.2 board:

I say “fair” because the author could have done a better job showing the menuconfig options and I find WinSCP to be finicky to download the firmware.bin file (I use NotePad++ myself). It does have a sample printer.cfg file, but I would recommend starting with something like: 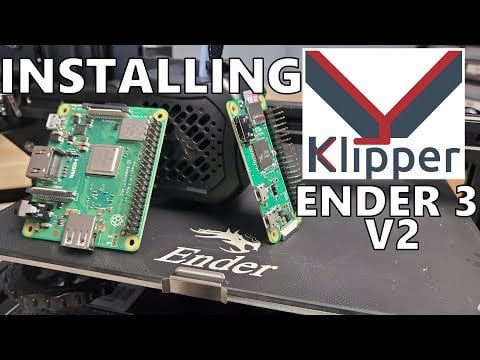 Good luck - it really isn’t as hard as it may seem.

Currently the board is NOT the 32 bit board so it has to be flashed over USB. I originally used that orange pi setup guide but that guide uses Armbian Linux. I could not get the onboard Wifi to work with Armbian - I think Armbian will only work with a USB Wifi device. I had to go with Debian. I used KIAUH to install Klipper Moonraker and Mainsail… for some reason, KIAUH did not install crowsnest so the Webcam did not work. I had to install crowsnest manually. I get the feeling that the Orange Pi is different enough from the Raspberry Pi that some installation scripts don’t work properly. I am definitely not very good with Linux…

I personally love Klipper, Mainsail along with the whole infrastructure and I’ve really had very few problems with the few I had being resolved within 24 hours. Now, I’m running with Raspberry Pi 4 Bs and with 32bit controller boards (MKS Robin Nano V3.1 and Octopus V1.1).

From what I’m seeing, if you run with anything other than the Raspberry Pi you’re going to run into problems AND support for anything not that isn’t genuine Klipper running on a Raspberry Pi is spotty at best.

It doesn’t hurt running with 32bit boards as well - the Creality 4.2.x boards seem to be okay but people do have problems with them; if you shell out for a Raspberry Pi (CanaKit has a few in stock) I recommend that you also look at a replacement controller like the BTT SKR Mini E3 V3:

It looks like it’s currently out of stock at everybody’s favourite 3D printer store (@Jason, the product image on your site is for the V2.0, the V3.0 looks a lot cooler with the machined heat sink (pun intended)): 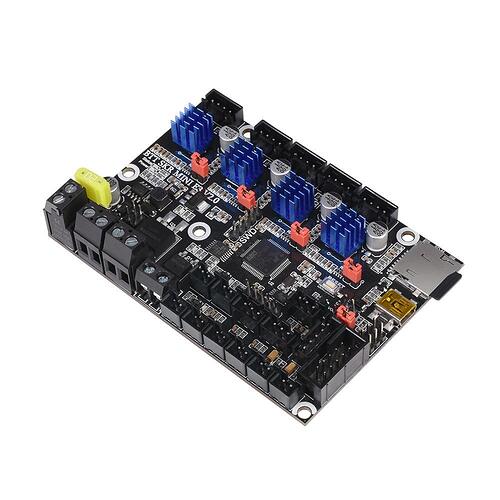 Despite just telling you to spend $200+, you will find the Klipper/Mainsail experience to be vastly superior to the Marlin/Octoprint and, once you’ve worked through the process once, you’ll find that it’s a lot easier to maintain and upgrade the system yourself.

Thanks! Really looking forward to working with Klipper.

you guys are making me jealous, I need some time to R&D this Klipper stuff from which you speak,

Just are not enough hours in the day.

I’m just getting my custom CoreXY printer working and did my first prints last night: the Benchy in the foreground of the picture below was my third print and I’m printing the latest Voron test cube right now: 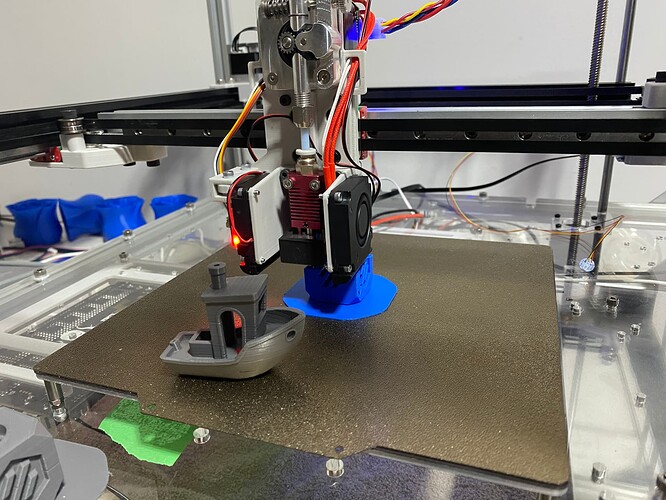 The printer is a CoreXY configuration and consists of four Z axis drivers for autoleveling (“Quad Gantry Leveling” in KlipperSpeak), driven by an BTT Octopus V1.1 with TMC2209’s that also drives the A/B steppers which provide sensorless homing. The toolhead is controlled by a Mellow FLY SHT 42 board that controls the extruder (again a TMC2209) and hot end temperature as well as the fans and is connected to the Octopus by CAN, so only four wires from the Octopus to the toolhead.

I can load gcode, monitor print operation, configure/tweak the parameters from a web page as well as download them from a web browser without having to play around with Visual Studio and SD Cards.

I should point out that the only real tuning I’ve done before starting to print was to calibrate the extruder which was done through the printer’s Mainsail web page. Doing a mesh analysis of the flatness of the build surface requires a couple of mouse clicks and is built into Mainsail-Fluidd/Klipper as well.

With Klipper, I haven’t written one line of code and the amount of Raspberry Pi set up took less than ten minutes including building Klipper firmware images for the Octopus and FLY SHT boards. To be fair, this wasn’t the first printer I’ve set up on Klipper, but the first time I did it (for my Spare Parts Printer) it took less than a day to go through the process. Having a good understanding of the electronics involved is definitely a plus to customize your system but if you are familiar with 3D printers and different parts there are good config files that you can start with and support is amazing.

The only area where Klipper could be considered deficient is in the controller user interface - you’re limited to a 12864 display with text. The “KlipperScreen” software that runs on the Klipper host Raspberry Pi is as good as anything you’ll see with Marlin or RepRap and the Mainsail/Fluidd web pages provides very comprehensive operations and customization capabilities that can run on a local computer or your smartphone. Some people run Octoprint with Klipper, but I’m not really sure why other than they’re used to the application.

As I’ve always said, the online developer support is for people running genuine Klipper and not a forked version on something other than a Raspberry Pi 3 or 4. In these cases, the Klipper developers will politely not respond to queries and guide you to the manufacturers. That’s not good news for people running the Creality Sonic Pad (although I’m seeing Creality is starting to step up and support customers) or if you’re running a rPi “like” single board computer that requires a forked version of Klipper to run.

I have a bit of work to do (Cable management is something that should be obvious form the picture above) and there are a few things that need tweaking. I also want to look at changing the Toolhead controller to a BTT EBB 42 board as it has a built in ADXL345 so I can do acceleration tests (which is built into the Klipper infrastructure).

Working with Klipper makes setting up and tuning a printer a lot easier than working with something like Marlin and there’s an amazing amount of capabilities as well as support out there that are that will make your journey easier.

I highly recommend you take the time to look into it.

I will do just that, We just got in our last shipments the BTT 42 boards and just the plain Acc units as a stand-alone and work with Klipper. I have actually purchased the hardware all ready to put in my voron, Similar config to what you have in your custom but I am running as much CANBUS as possible.

I am going to finish up a couple of things I got going on, (including 3rd edit on my book) and then get into it. Going to be a nice running machine after I get the book on the market.

That is a pretty cool setup. I will totally agree with what you said about the Pi’s -everything is geared toward Raspberry Pi. Expect more playing around if you go with something else. I’m pretty sure that’s why I f’d my stock mainboard and cannot flash anything via USB and will need a bootloader. I’m still not deterred… The BTT Manta M8P I have on the way comes with the CB1 module for Klipper and Mainsail but it looks like they have their own OS image already prepared that can be flashed onto the CB1. I am trying to figure out if is possible to keep the CB1 powered up when the mainboard is powered off.

While I was very familiar with Octoprint and it’s plugins, I decided to go with Mainsail as it seems very well streamlined and suited for klipper.

As luck would have it, my Manta M8P with CB1 arrived waaaaay early (just a day after I bricked the stock board

). Loaded up Klipper, Mainsail and Moonraker - no issues. Board is flashed and mainsail connects. Now the fun begins… 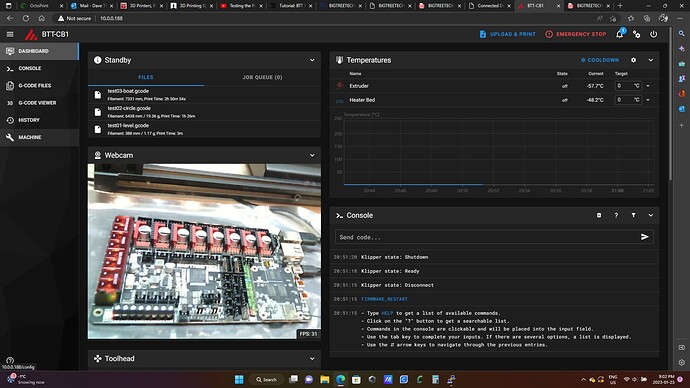