Extruder cannot push filament through my all metal hot end

I recently purchased an all-metal hotend and dropped it into my Ender 5 pro. I put PLA filament into it and am able to force it out the nozzle manually. However, when I try to print a temperature tower, no filament comes out.

So I keep my nozzle hot and pull out my filament and PTFE tubing, and there is always some left inside the hot end. I am able to use the cleaning tool to push the remaining filament out the nozzle (while it’s hot).

Why is this happening?

Are you able to push the filament through the bowden tube? Is it possible your temp tower is starting at too low a temperature?

The all metal hot ends have a chunk of bowden tube in them. It basically guides the filament into the throat. If it is short or not exactly straight the filament hits the edge and jams up.

I’d suggest check the leangh of the guide tube and I usually ream out the inside some so the top edge is thinner and the top is funnel shaped.

All this assumes it has never had filament inside (not jammed) and it is still heating properly,

Yes…able to push all through biwden tube, hot end and out the heated nozzle. My temperature tower started at 230C…is that too hot?

I am able to clear the left over filament by using the cleaning tool to push it out the heated nozzle. Always heats properly.

Thats a little hot for PLA, especially if it gets to cook a little while in the hot end without moving. I print PLA at 210 or 215 so I wonder if that’s the issue?

Some other possibilities:
Have you measured the diameter of the filament? Bowden tubes between being wide enough (internally) that the filament will pass through it, but not so wide that the filament has a lot of wiggle room which would mess up extrusion/retraction sequences. If the filament is too wide (out of spec) it can bind inside the tube. You may be able to push it through by hand by the extruder itself may not have enough grip to do it.

And speaking of extruders with no grip, there is an adjustment screw on the extruder. You may need to tighten it to increase the grip the extruder has on the filament so it can give it a better push. If you make adjustments to it, do it in small increments. Grabbing the filament too hard can squish it into an oval and actually make things worse.

Is your Bowden tube too tightly curved? That’s another possiblity. It should go from the extruder to the print head in one continuous arc (in a perfect world). The more twisted the Bowden tube is, the more the filament binds with the internal walls and thus the harder it is for the extruder to push.

Lastly, are you using a quality Bowden tube? I don’t know much about them from first-hand experience, but I hear the Capricorn ones are the best. I don’t know for certain that blue vs. white makes any actual difference. That is to say, I don’t think the colour is inherent in the material.

Thank you sir. Copied your example and taped my bowden tube and those cables into an arc like the vanilla Ender 5 Pro setup.
Sadly, still no luck.

I recently put in a generic all metal hotend, new thermister and new heater cartridge. I did the PID auto-tuning. I tried printing a PLA temperature tower (no extraction) and after the first 2mm it stops. I then check my hotend and it appears the filament in the heat break has begun to melt, so the extruder was unable to continue pushing filament through.

I did the same with an ABS temperature tower (no extraction), and it stops after the first 5mm. It cannot print any ABS if the temperature is above 220C. Again I checked my hotend and it appears the filament in the heat break began to melt, stopping the extruder from pushing the filament through.

I also noticed the following with my all metal hotend, which I thought may be ABS filament leaking between the heat break and nozzle as well: 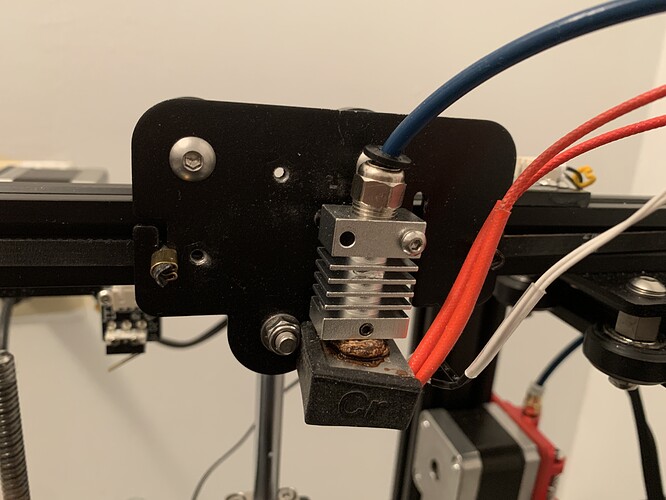 A leaking hot end is not ok. This is an issue. I would take it apart clean everything there is usually a ptfe guide into the throat. I like to ream the inside of the upper end a bit so it looks like a funnel. This is not always possible if the outside is already chamfered. The leaking could be blocking the extruder or putting extra pressure on the drive. Fix the leak and go from there.

Someone once forwarded this to me. It’s very informative and may be just what you need to watch:

Mine is all metal hotend so I have a cleaning tool to push melted filament through instead of a bowden tube. Do this every time; for some reason after an hour or so of printing the heat creeps up into my heat sink and when filament starts to melt there my extruder cannot push it through.

I checked my nozzle and it is screwed on tight; I looked around and no filament leakage spotted.

The heatsink fan is working?

Yes…It is spinning, but it isn’t cooling the hotend enough…at 100%

Is there another fan on the printer that will fit there just to try? In case the fan is defective and not moving enough air

Sadly no. I would have to order a new fan enclosure to test this.