So my extruder motor was not extruding anything just shaking back and forth. so I had thought it was the extension cable that was causing the problem as plugging in the original shorter cable got the feeder gears moving. However, I have just picked up a new extension cable and found it still isn’t working. When clicking the purge more from the load filament menu i find the feeder gears are moving in the opposite direction. so the printer is still out of commission. https://youtu.be/vV2b0olJ3kE

Once my current print stops printing, I’m going to do some hardware experiments with this. I still think it’s a cabling problem (somewhere) but I’ll get back to you around 7PM, unless something interrupts me.

And yet the cable has been replaced and the problem still exists… Am I summarising things correctly?

yes testing with the new cable and another motors cable stopped the motor from doing what was in the video. However now when I use the change filement command on the menu and advance the filament the motor is spinning in the opposite direction as if it is unloading. I just tried to do a test print to see if it is something funky just with that menu command and the BL touch probe failed on trying to level the bed. Things are just going down hill ever since the extruder stopped feeding. I think the carriage is too high on the z axis while attempting to do a level as the prob doesn’t make contact. In the morning I will try using the menu move commands to lower the z and initiate the test print again to see if it gets past the bed level issue and gives any insights into the extruder motor behaviour.

if the extruder is running backwards the cable might need to be flipped.

I agree that the cable may be backwards. however, the cable usually indexed (ie. has notches that only allow it to be put in one way). Do not force it in backward. Check the extension cable you got. Is it capable of being put in backward? I’ve never actually seen an extension cable for these things, so I don’t know if it goes between the controller and the existing cable or between the existing cable and the stepper motor.

There is likely an option within the firmware’s configuration file to specify that a given stepper motor runs backwards, but that is something I’ve never modified on a 3D printer. That solution is best left to someone else to provide if you find your cables aren’t backwards.

Actually, could you post a picture of the extension cable? There is an outside chance that the cable was manufactured improperly. Speaking from multiple experiences, it’s easy to not realise a cable has twisted over when crimping on a connector. Back in the '80s I used to have to make my own cables. I’ve made that mistake a few times.

lego hahaha indexed. My experience with the sidewinder was 1/3 of the jst 3.5mm sockets on the board had Dupont connectors in them. Held in with hotmelt glue. When I removed the glue because my OCD have a kitten and removed and replaced with the correct connector that indexed on one stepper. I lost tract of which black wire was which. How I know if you reverse the connection it runs backwards…

I was drawing on my experience. I never stopped to consider it might not have been assembled in the dark by people who jammed the round peg in the square hole.
I assumed anything is possible.

The saga continues. The BL touch just stopped glowing during a print, right in the middle. After it was done I tried a little calibration cube. No light and no BL touch. I disassembled the hot end again and discovered the LED connector was no longer attached to the board completely. Order board, back ordered. pulled the trigger on a new complete extruder. Hopefully that will solve if the stepper is over heating… don’t burst my bubble. It just just arrived (Thanks 3dpc that was fast!) WHOA it i…

Indexed connectors ? Then the have to match, where is the fun in that?

The backwards motion had me second guessing the cable being flipped too. However as you said on the creality they are indexed and only go in to the socket one direction. I double checked the cable and each wire is going to the appropriate opposite end. doesn’t appear to have an wires swapped.

The last time the extruder worked correctly, it was without the extension cable and on the old controller board. Am I remembering it correctly?

Any chance you could post a photo of the entire extension cable? I just want to visually see that one of the connectors isn’t on backwards.

The other alternative is that the firmware configuration has the extruder set to run backwards, but I would imagine that would have generated a lot of complaints and would have shown up in discussion groups. 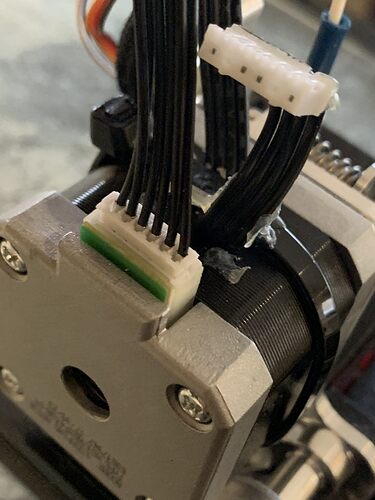 the odd thing is this backward behaviour with the unload command is now happening with the regular cable as well. Nothing changed on the board so it is like the control software got messed up somehow. all this started with the extruder stopping mid print.

running an unload command but going in the wrong direction. https://youtu.be/MMnLti5grhI

maybe i should try this mod to the extension cable. https://youtu.be/AgyNM7FQrmk

it is just really weird that this has weirdness started mid print with out any upgrades or changes to the printer.

the printer is now failing to heat the bed too. gremlins are in there. might need to bring it in for servicing.

Just because a cable fits doesn’t mean it’s the right cable. In many cases, the wires flip between ends, switching the pin connection.