So twice I have tried to print ruined towers and see my print has failed. We are talking about large prints (1 day )

About halfway through the print, the second half of the tower floor seems to have shifted and starts at the middle of the print and continues where there is nothing beneeth so I have filament that falls to the plate. It as is someone shifted the printing to print 5 inches to the left. The bottom is well attached to the build plate so the print itself has not moved. It is as if the printer has changes to start position of the print and started from a new position.

I also noted a bumping noise when the nozzle moves rapidly from one place to another.

Is my problem with retraction?

Current base settings in the slicer

They say a picture is worth a thousand words. So to compensate for my so-so english here is a picture to illustrate my meaning. 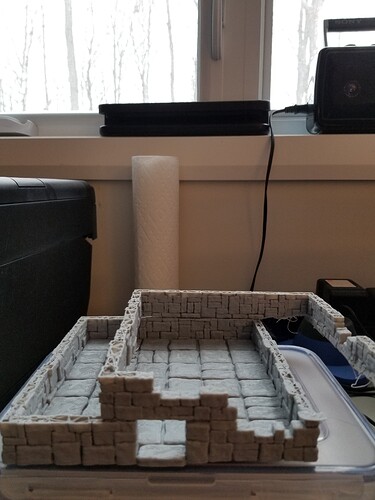 Do you have a picture of what the print is supposed to look like? I’m thinking that layer thats hanging off is supposed to be on top of the other walls

OMG if I am seeing this right that is quite a shift. Right by 1/3 of the print? Is that correct. No that is not retraction settings they pull the filament away from the nozzle tip with the head is not laying down filament.

I have only had shifts on my artillery. In my case they were caused by something preventing the bed from moving (the filament fell off the holder…)

I would suggest using the move commands and watching very closely if there is any issue with the movements, move each axis from end stop to end stop. see if anything could cause an issue or it binds or jumps for any reason.

Check everything is running smoothly I also would disable the steppers and move them all by hand (if you can I have never touched an CR6) it should be smooth with no hard spots.

I had to diagnose my sisters inkjet once (that is my background) and after watching it for some time the problem was found. The cat was grabbing the print head.

It could be a lot of things. Not only the printer.

@­Glenn
Pardon my poorly worded query. That is exactly the idea I am trying to convey. This happened with to different files from to different campaigns. Hera is a screen captur of the render of the ruined tower. The Other was for the ice tower on Thingiverse.

I’m thinking this has to be a stepper issue. maybe a belt skipped or something else happened to make the stepper miss steps in one direction.

You both mention steppers but I don’t know how I would go about disabling/moving them… Care to elaborate?

Also about the nozzle making knocking sounds when moving long distances over a print, what about that issue?

And are both situations related or two seperate issues?

could be related but the knocking sound happens when the nozzle crosses its own path on the same layer. like when it’s doing some infill patterns. Stepper motors that move your axis work only in one direction. the control says move X (Y or Z) motor 100 steps clockwise at a certain speed for example but it can’t tell if the motor actually completed the move (no communication back from the motor). So my thinking is (and I’m assuming this is your X-axis that is the problem) the motor turned and something had stopped the carriage from moving (like it jammed) or the belt/pulley slipped and it wasn’t able to complete the move (the move from right to left in your picture was incomplete) and the controller not knowing anything happened just had to continue from where it was.

You most likely got a cable caught from whatever axis was affected. Skipping belts, caused by stretched belts or loose rollers tend to cause intermittent failure and will show up as an axis shifting in a series of steps. A giant jump like that pretty much guarantees that something physically restricted the axis. Cable snags are most common. Seriously Cats, or other curious pets, are another.

There are two non-physical possibilities:

@gondolin I would suggest just manually walk all the movements by hand if there is slipping or obstruction you likely will notice it.

On both my Artillery and Prusa in the menus there is a disable steppers action. This allows them to move freely rather than being powered up. My troubleshooting brain says do this at print temps in case it is something expending because of heat. This is unlikely. You could power off the printer and move the steppers. On the prusa this will cause the display to flicker. FYI

Hmm after reading point one, there is a cable that is not where it was before… How can I explain this…

The Z-axis cable was in front of the spool (1), now it is in the back.(2) Could this be the sources? 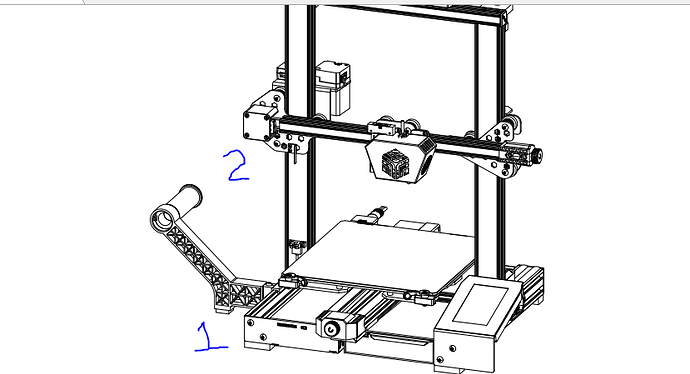 @gondolin it could be is there any way it can catch on something? Just move it around and imagine back and forth 100s of times.

Was wondering is Belt tension might be an issue as the printing hear swings left to right on a long distance.

How do I know if the belt tension is okay?

It could be. the belt shout be springy but not crazy hard. If there is a bit of resistance on what every part is moving the belt should not slip. If the tension is loose the belt will sip on the geared drive or jump teeth.

Let me try again. If I am checking the bed and I grab the belt that moves the bed and I hold the bed the belt and bed should be close to the same resistance without the belt moving independently. I don’t mean tons of tension just a little.

I was thinking more of the belt that moves the head left-to-right,

Because it looks like, at about half way through the height of the print, the printer head stole 2nd base, slid past the base and just decided to stay there in center field. LOL

A correction to my earlier post:
Overheating of the stepper driver and a cable partially disconnected are both valid reasons an axis will stop moving and then re-start with the controller no longer being aware of where the carriage actually is and this will lead to a layer shift, BUT…

On thinking about this some more, in both of the above cases, the other axes will continue operating. On my laser engraver this resulted in a line being burned as one axis continued to move but the other didn’t. On a 3D printer, you would have seen a straight line of filament being deposited. That was not the case, so that eliminates those suggestions.

As an aside, if you search YouTube, there are videos of cats playing whack-a-mole with 3D printer carriages. Also photos of cats lying down on the printer bed because it’s warm.

Anyway, secure that cable you were talking about as it’s the most likely candidate. 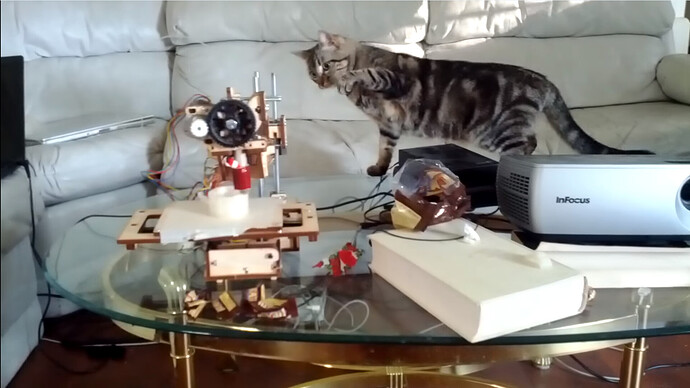 LOL! Well, at least my wife’s cat is not responsible… unless it found a way to unzip / zip the door to my enclosure…

What you do not see was a bunch of filament dropping to the pinting plate on the overhanging side of the print. I just cut it off to get rid of the miss. So yes, it was extruding filament in the air on all parts not touching the print.

Hindsight, I should have let the print finish, seperate the two parts and reglue the parts once aligned and finish up with Sculpt-a-mode.