Hi all, I’m having trouble my newly acquired Creality Silicon Carbon print bed. I’m printing with PLA PRO and I cannot get it to stick. Any suggestions?

I found wash it only with a drop of dish soap and progressively more warm water, like I’m slowly, but more firmly trying to excise demons, then let air dry, never touch with anything other than a plastic scraper, and then only when I have to. Rewash if adhesion issues show up, every few days to a week. 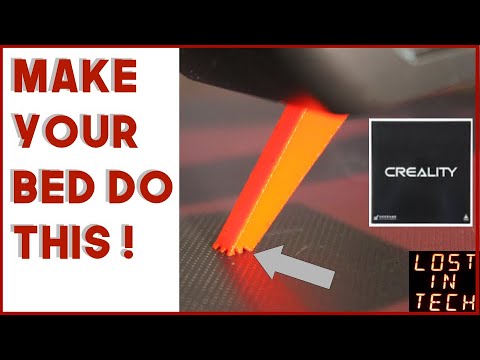 Thanks. But it’s brand new and I’ve tried a few prints and it won’t stick. I’m going to try a bit higher nozzle height next.

I have no experience with the silicon carbon bed, but with PLA, my go-to regiment is to wash the bed with soap and warm water with a soft bristle scrub pad, same as the one doctors use to scrub their fingers before operation. I dry the build plate with a microfiber cloth handling it on the edges only. I then apply strokes of glue stick to the whole plate, no need to cover the whole thing, just keep the lines maybe 2 cm apart in both the x and y direction. Then with a Kimwipe dampened with water, in circular motions, spread the glue to a nice even coating. When the plate heats up, I don’t see any evidence of glue because it’s spread thinly. When I go to print, have no worries that a 20 hour PLA print is going to let loose. Albeit, I do print in an enclosure to minimize any draught or changes in room temperature when my furnace kicks back at night. I do leave one door slightly open to the enclosure as PLA has a low melting point and the heat break needs that cooler air to work properly. As long as you don’t touch the prepped surface, you can wipe again with the Kimwipe and go a few more times printing without cleaning and reapplying the glue. If the print is large and a long time to print, don’t take the chance, clean the plate again.

I may be wrong here, but glue is a sticking agent for PLA while a releasing agent for PETG, ASA, PC, etc. It’s what I found others have said on the interweb, and generally been my experience as well.

OK. Dad jokes aside, I don’t have, and have never heard of, a Silicon-Carbon print bed, but I do have the Carbon Fibre print bed from 3DPC:

Personally, I love it. It is, however, essential that you put glue on it.

When I first bought it, I did have it dialed in such that most of my PLA would stick, most of the time, but it was touch-and-go.

I eventually tried glue sticks, only to learn that they are not created equal. I bought 2 in one shopping trip just to compare them. The first was the Staples house brand. The second was Elmer’s All Purpose Washable (it doesn’t have to be the purple variety).

The Staples brand absolutely sucks. It may be good for paper crafts but it might as well not even be there where PLA is concerned.

The Elmer’s, on the other hand; unless I let the plate cool significantly, I have to use a hammer and spatula to get the prints off. I seriously think that even a moderate sized print (like the flexi-octopus) will grip enough to lift the printer (Ender 5 Pro). I tried it once but aborted because I was afraid of bending the bed by lifting that much weight with it but suffice it to say, I became concerned for the printer’s safety before the print let go.

Official glass build plate for the Ender Series. This glass comes with two sides - one is pure glass, whereas the other has a porous cross hatched pattern designed to hold onto your prints when it's hot. Use either side!  Binder Clips...

That’s the one I got. I just washed the surface with soap and warm water. Let’s see.

Did you calibrate the Z and tram (level) the bed accurately?

Thanks everyone for the suggestions, very helpful but none worked. The problem was the nozzle, a steel one. It should work, I think, but when I switched back to a brass one it worked perfectly.

hey, @Smalleagle Welcome to the Forum, Hope to see you here often.

Most of the time when I use glass I use hot water and soap to clean it initially but between prints, if I do not use glue I will always give it a wipe with 99.9% ISO. Keeps em clean and helps a lot with adhesion. I generally set my Zoffset a little tighter and deal with the elephant’s foot when the print is complete.

Glad you got it straightened out.

Yes, printing on the glass was not the issue, I was using the silicon carbon surface, which is fantastic! Once the bed cools down, the print just slides off!

Interesting… Is it a thermal issue or a nozzle height issue, do you think? Did you recalibrate your Z-offset reach time you changed nozzle?

I didn’t try a different nozzle height. I should have. One YouTuber mentioned that the corborundum surface needs a higher nozzle height because of the porous surface.

I just mean that even if I took the same nozzle out and put it right back in, I’d redo the Z-offset, because any difference in my tightening will lead to a different nozzle height

Good point. I just started with 3d printing so I have a lot to learn!

I’ve been at it about 12ish years and the group on here teaches me stuff all the time.